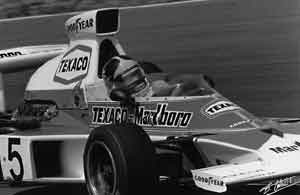 F1 legend Emerson Fittipaldi has issued his wish for Sunday's 2021 championship showdown in Abu Dhabi: "May the best man win."

However, the 74-year-old two-time title winner admits to not being very interested in the outcome of last Sunday's tumultuous and highly contentious penultimate round between Lewis Hamilton and Max Verstappen.

"I couldn't watch it," he told La Gazzetta dello Sport. "I was in the hospital with Enzo.

"I had to be satisfied with the highlights."

Indeed, Fittipaldi's 20-year-old grandson was injured when he struck the stationary Theo Pourchaire's Formula 2 car at the start of the Saudi support race.

Enzo Fittipaldi suffered a broken heel as well as cuts and bruises on his face.

"He's better, but his right heel is fractured. He will clearly not race in Abu Dhabi," said Emerson.

But he will be watching the Formula 1 action in Abu Dhabi - especially as Fittipaldi says it reminds him of his epic battle with Clay Regazzoni in 1974.

It was the only other time in F1 history that the two title protagonists were dead-even on points at the final race.

"The tension devoured me so much that I only got three hours of sleep the night before the race," he revealed. "That never happened to me before that or since.

"The pressure for Max, Lewis and the two teams is skyrocketing today. And Clay and I didn't have all of this rivalry - we respected each other.

"But I still remember a moment before the race with me, him and our mechanics. Nobody could even look at each other because of the tension," said Fittipaldi.

As for who will emerge with the biggest trophy on Sunday, he concluded: "Hamilton has more experience, but Max has been in front more this year.

"They certainly have different styles, but both have a lot of talent. So I say: may the best man win."