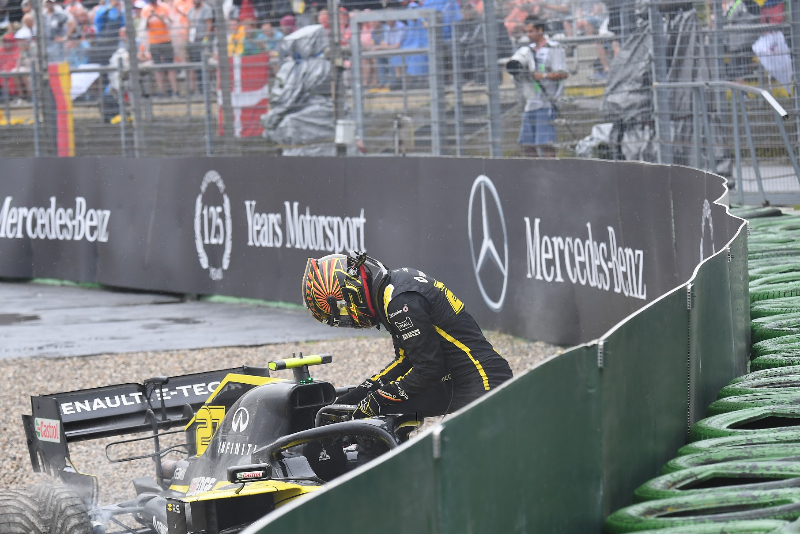 Nico Hulkenberg's crash out of the German GP coincides with "important discussions" about his future.

That is the news from team boss Cyril Abiteboul, who says he and other Renault team members had "tears in our eyes" when Hulkenberg slid off the wet Hockenheim circuit and lost his first-ever F1 podium.

"You have to wonder about the psychological side, but with so many things happening, you cannot blame him," France's Auto Hebdo quotes Abiteboul as saying.

Indeed, Hulkenberg holds the record for the longest F1 career without a single podium. His contract is up at the end of the season and Esteban Ocon is being linked with his seat.

"Let's be honest," said Abiteboul, when asked about Hulkenberg's crash.

"This comes at a time of important discussions for the future. We are thinking about our options and he knows it. It is something that comes into play.

"It's a human and even sentimental element because Nico has been with us for three years now," he added.

But Abiteboul also acknowledges that, amid an admittedly "difficult" season for the French team, Renault must do better with its 2019 car.

"The aerodynamics of our car are absolutely not at the level of our expectations," he said.

Now, Renault's slide from fourth to just sixth in the constructors' standings is made even worse by an incident that occurred on the road to Budapest.

One of the team's yellow transporters crashed into a ditch on the side of a Hungarian motorway. It is not known if the truck was carrying the F1 cars.

"The driver, who was driving within the respected regulations, is conscious and has not suffered serious injury. He's been transported to hospital for further checks," Renault said in a statement.

Finally, F1 legend Alain Prost - formerly a team advisor - has now been appointed non-executive director of Renault Sport. It is a role similar to that held at Mercedes by the late Niki Lauda.