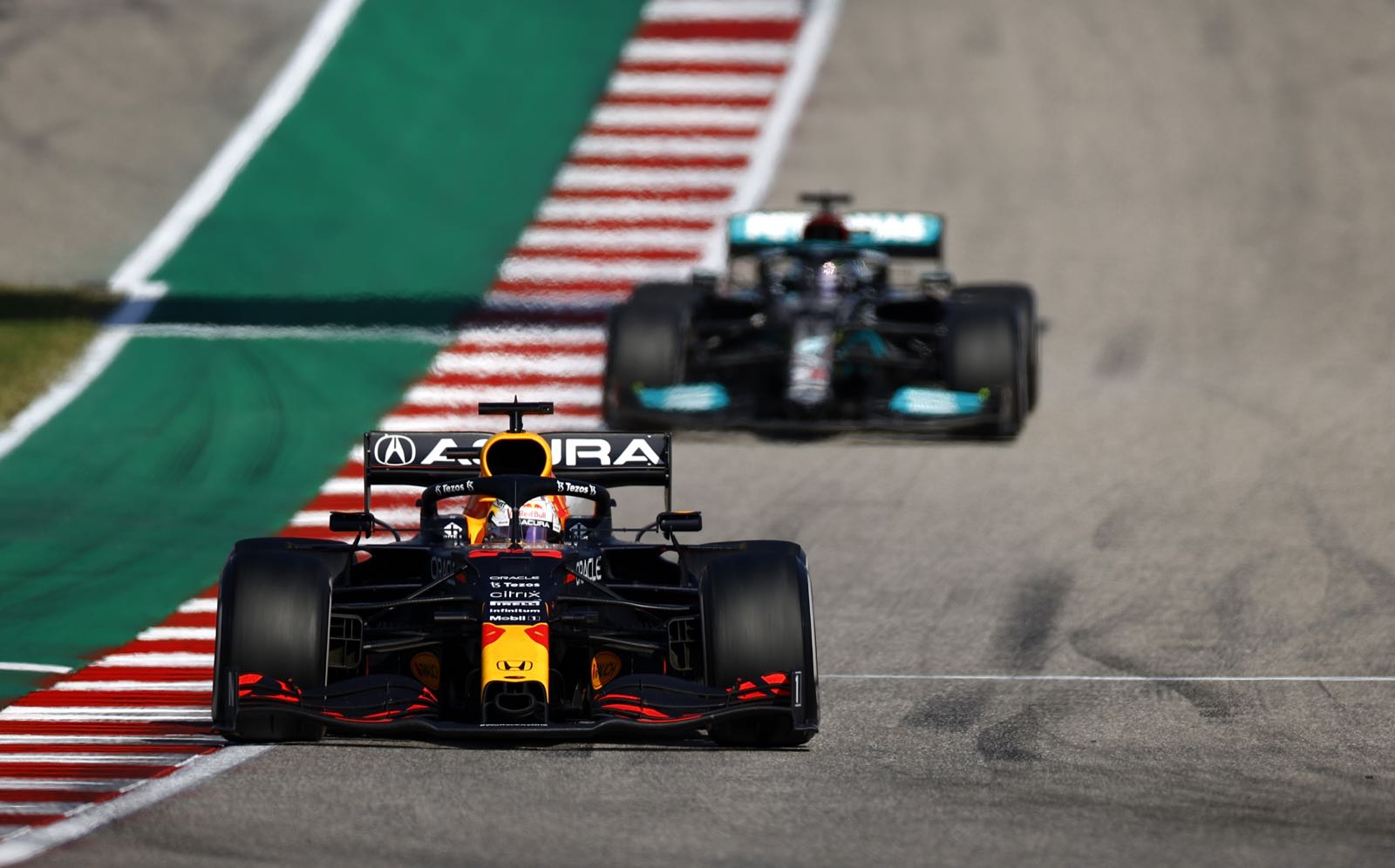 Max Verstappen won the US Grand Prix in his Red Bull-Honda, with a charging Lewis Hamilton finishing second in his Mercedes GP just 1.333 seconds behind. Sergio Perez in the second Red Bull finished third, 42.223s behind the winner.

The win is Verstappen’s eighth win of the season, and 18th career victory. Verstappen extends his lead in the Drivers Championship to 12 points over Hamilton.

Charles Leclerc (52.246s) in the Ferrari was fourth, followed by Daniel Ricciardo (1m16.854s) in the McLaren-Mercedes was fifth, Valtteri Bottas (1m20.128s) in the second Mercedes GP was sixth, Carlos Sainz (1m23.545s) in the second Ferrari was seventh, Lando Norris (1m24.395s) in the second McLaren was eighth, Yuki Tsunoda (1 lap) in the AlphaTauri-Honda was ninth and Sebastian Vettel in the Aston Martin-Mercedes took the final point in tenth place.

Before the start Verstappen starts on pole, with his title rival Hamilton alongside on the front row. Perez and Leclerc start on row two, Sainz and Ricciardo on row three, Norris and Gasly start on row four and Bottas with a grid penalty and Tsunoda round out the top ten. All drivers starting on medium tyres except Sainz and Tsunoda on soft tyres.

The temperature is warming up for the race, and all drivers expected to be on a two-stop strategy. The key to winning the race will be whoever takes best care of their rear tyres.

On the grid the AlphaTauri mechanics are working on Gasly’s car.

At the appointed time the field came around, the lights went out and the race started with Verstappen getting a slow start, Hamilton goes side-by-side, Verstappen tries to push Hamllton to the inside, butt Hamilton takes the lead in turn 1, Verstappen runs off the outside of the corner but continues. Perez looks to get by his team mate into turn 2 but backed off.

Latifi touches and spins Stroll into the first corner.

Hamilton leads at the first lap.

Ocon has contact and pits for a new front wing.

The top three making a bit of a breakaway from the rest of the field.

Hamilton reports to the team about Verstappen, “he is quicker than me right now.”

On lap 8 Alonso pits for hard tyres and rejoins in 17th.

On lap 10 Tsunoda and Russell pit, both switching to hard tyres.

Verstappen quickly gets by Ricciardo for four. Ricciardo pits the next lap as well as Sainz.

On lap 14 Gasly pits with a suspension problem.

Raikkonen and Alonso battle for 13th, the two touching but continuing.

Alonso gives back his place to Giovinazzi, fearing a 5-second penalty for going off the track to make the pass,

On lap 25 Giovinazzi and Alonso battle over 11th place and Alonso gets the position.

On lap 28 a virtual safety car comes out for a piece of debris, but after half a minute the track goes green again.

Verstappen pits from the lead for another set of hard tyres, and rejoins in third behind Perez. Sainz pits for hard tyres and rejoins eighth.

Verstappen quickly gets past his team mate into second place.

On lap 33 Leclerc pits from third for hard tyres and rejoins in fourth. Perez sets fast lap at 1m39.566s.

On lap 35 Bottas makes his stop of hard tyres and rejoins in seventh.

On lap 38 Hamilton pits from the lead for another set on hard tyres, and rejoins in second, 8.9 seconds behind Verstappen.

On lap 39 Vettel pits for medium tyres and rejoins in 13th.

On lap 42 Ocon pits and retires the Alpine-Renault.

Verstappen leads Hamilton b 4.6 seconds. Ricciardo and Sainz are battling for fifth place - the two touching slightly. Bottas closing on the two.

On lap 46, with ten laps to go, Verstappen leads Hamilton by 2.5 seconds.

On lap 51 Alonso retires in the pits with another suspension issue.

Bottas continues to chase Sainz for sixth. Raikkonen goes off track but continues in 12th.

Just into the last lap Hamilton trails Verstappen by under a second.

At the finish line Verstappen takes the win with Hamilton and Perez behind.

After the flag Christian Horner told Verstappen, "It is big for us to beat Mercedes here, get the win against Lewis.”