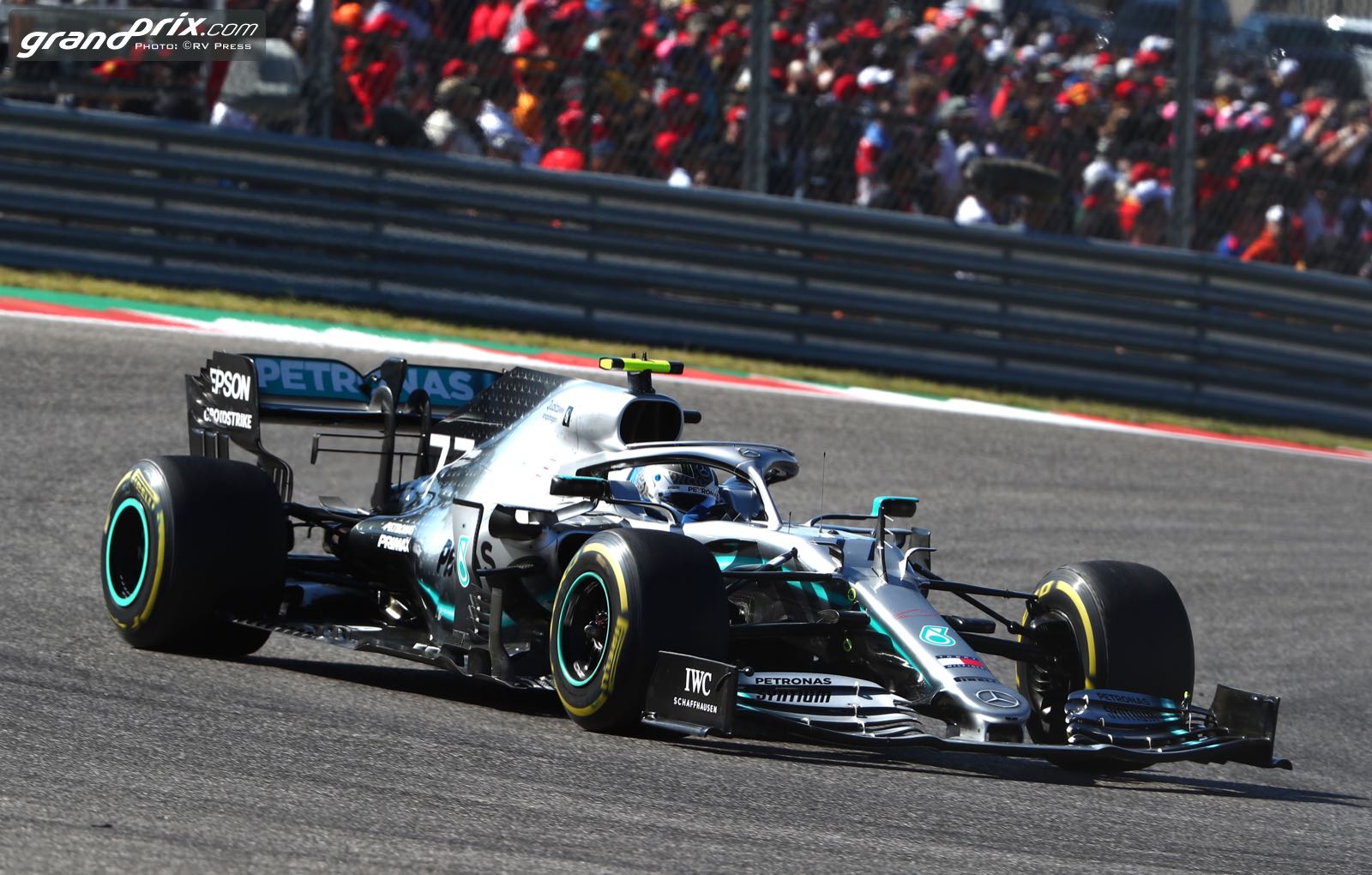 Valtteri Bottas won the United States Grand Prix in his Mercedes GP ahead of his team mate Lewis Hamilton, 4.148 seconds behind. Hamilton clinches his sixth Drivers’ Championship. Max Verstappen in his Red Bull-Honda finished third, 5.002 seconds behind the winner.

The win is Bottas four of the season and seventh career victory. It is Mercedes GP’s 14th win of the 2019 season.

Charles Leclerc (52.239s) in the Ferrari finished fourth, and took the point for fastest lap, followed by Alex Albon (1m18.038s) in the Red Bull-Honda was fifth, Daniel Ricciardo (1m30.366s) in the Renault was sixth, Lando Norris (1m30.764s) in the McLaren-Renault was seventh, his team mate Carlos Sainz (1 lap) was eighth, Nico Hulkenberg in the second Renault was ninth and Serio Perez in the Racing Point-Mercedes finished in the final points paying position in tenth place.

Bottas is on pole in his Mercedes, with Sebastian Vettel’s Ferrari alongside, Verstappen and Leclerc on row two, Hamilton and Albon on row three, Sainz and Norris on row four and Ricciardo and Pierre Gasly rounding out the top ten, the first five on medium tyres and 5 thtough ten on soft tyres, and the rest a mix of hard and medium tyres.

At the appointed time the field came around, the lights went out and the race began with polesitter Bottas gettubg away quickly, Verstappen takes second ahead of Leclerc, Vetttel, Norris, Ricciardo, Gasly and Sainz. Sainz and Albon make contact on the first lap.

Vettel reports that he has a damaged car. Ferrari tells him that he has no damage to the car, just cold tyres.

On lap 7, Ferrari tell Leclerc that they are on plan ‘B’ - maybe a two stop strategy?

Red Bull tells Albon, running at the back, that he is running quicker than the leaders.

On lap 8 Vettel slows with a rear suspension failure, and pulls off the track to retire.

Ferrari tells Leclerc to be careful of the kerb on turn 8, becasue of Vettel’s suspension failure.

On lap 14 Verstappen pits from second place and switches to hard tyres and rejoins in fourth place.

On the next lap Bottas pits from the lead and switches to hard tyres as well and rejoins in third ahead of Verstappen.

On lap 16 Bottas passes Leclerc on the outside of turn 1 to take second place.

Later in the lap Verstappen passes Leclerc as well for third place.

Mercedes tells Hamilton that they believe the other front-runners are on a two-stop strategy - perhaps Hamilton is trying to go for a one-stop strategy?

On lap 18 Giovinazzi pits for hard tyres. Sainz, Raikkonen and Magnussen all pit as well.

Norris and Gasly both pit for hard tyres.

On lap 20 Leclerc pits from fourth for hard tyres and rejoins in sixth.

On lap 21 Ricciardo pits for hard tyres and rejoins in seventh place.

On lap 24 Bottas on fresher tyres passes Hamilton for the lead.

Hamilton immediately heads for the pits and switches to hard tyres and rejoins in third place.

Perez pit from sixth place for medium tyres and rejoins in 14th.

Mercedes tells Hamilton, “this will be close with Verstappen at the end of the race.” and “it is critical we make this one-stop work Lewis.” Hamilton asks for a target lap time.

On lap 28 Hulkenberg pits for medium tyres, and rejoins in 15th place.

Verstappen is reporting that he is struggling on his tyres.

On lap 33 Robert Kubica retires in the pits with a hydraulic failure.

Albon is closing on Norris.

McLaren tells Norris not to hold up Albon, but to follow him closely as he closes on Ricciardo.

On lap 35 Verstappen pits from second place and switches to medium tyres and rejoins in third, 15 seconds behind Hamilton.

On lap 36 Bottas pits from the lead for medium tyres, and he rejoins in second place 9 seconds behind Hamilton.

Hamilton tells Mercedes that it will be hard for him to make his tyres last.

Red Bull tells Verstappen that they need 8/10s of a second per lap to catch Hamilton before the finish.

Mercedes tells Hamilton, “we are concerned these might not get to the end."

On lap 43 Norris pits again for medium tyres and rejoins in tenth.

Sainz tells the team that he doesn’t think his tyres will last to the finish.

Renault tells Hulkenberg that he needs to let Raikkonen back past because he was off the track when he passes him,

Bottas is closing in on Hamilton in the lead.

On lap 51 Bottas gets alongside Hamilton can’t make it stick. Hamilton keeps the lead.

On lap 52 Bottas passes Hamilton into the first corner, and retakes the lead.

Mercedes tells Hamilton that the gap to Verstappen is 2.9 seconds, Hamilton responds, “leave me to it.”

On lap 54 Magnussen is off in gravel trap with an apparent brake failure.

On the final lap Verstappen is close to the back of Hamilton, 0.7s behind.

On the final lap Gasly pitted and retired, while Kvyat hits Perez, who drops to 11th place.

At the finish Bottas takes the win ahead of Hamilton and Verstappen.

Bottas said afterward, “It’s a nice win, feels good. It was the only thing I could focus on this week, obviously it wasn’t enough and Lewis has the title. Big congrats to him - he deserves it, he had a strong season.”

Lewis Hamilton said, “Overwhelming. It was such a tough race today, Valtteri did a fantastic job. I didn’t think the one stop was going to be possible.”

After the finish Kvyat is given a 5-second time penalty for causing a collision with Perez. This promotes Perez back to tenth place., Kvyat ends up 12th.