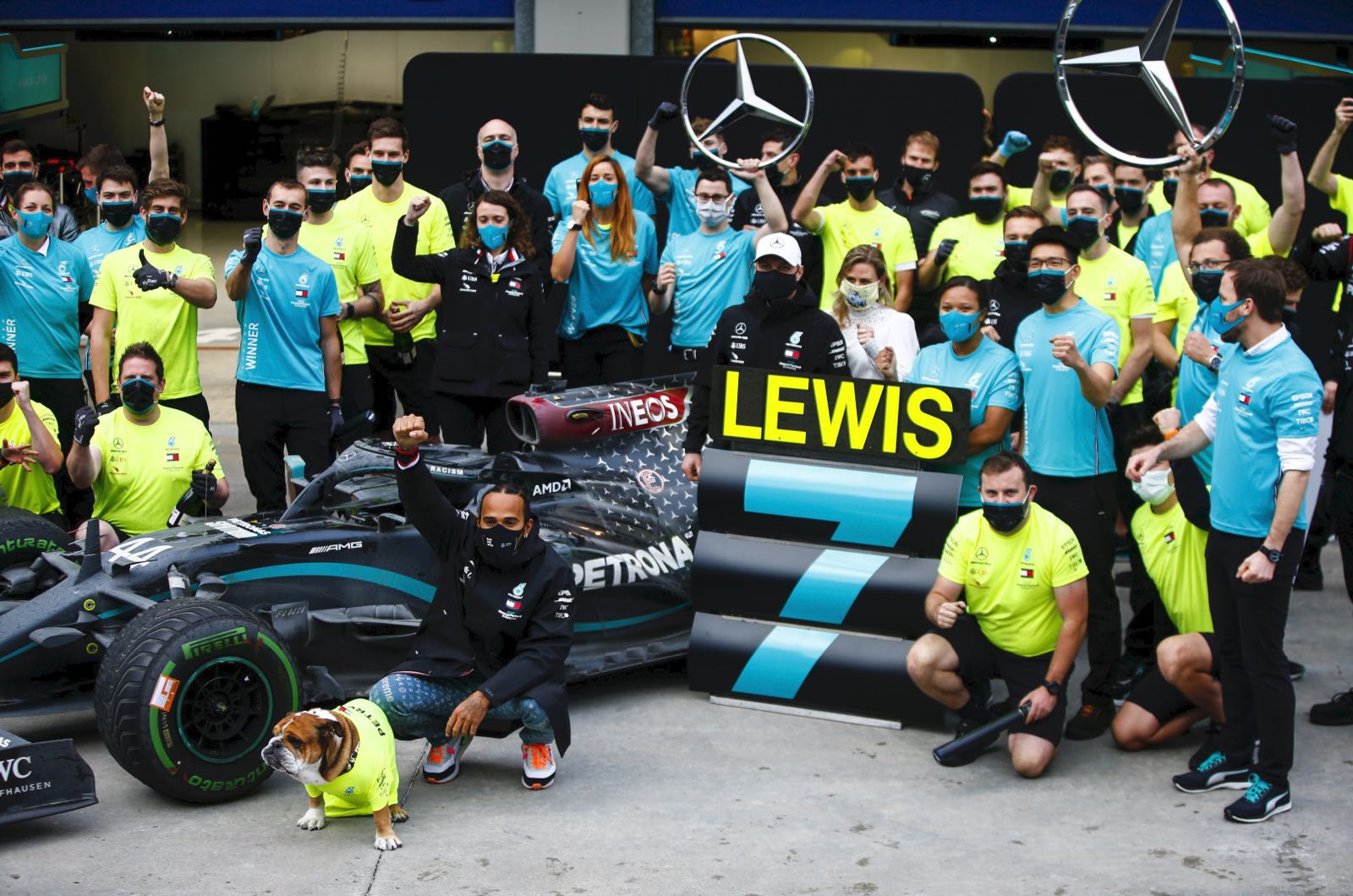 Lewis Hamilton won the Turkish Grand Prix in his Mercedes GP, and with it takes the World Championship. It is the 12th win of the season for the Mercedes GP team.

Sergio Perez finished second in his Racing Point-Mercedes, 31.633 seconds behind, Sebastian Vettel was third in his Ferrari, 31.960s behind the winner.

The win is Hamilton’s 10th of the season and 94th of his career. Hamilton clinches his 7th Drivers World Championship, equaling Michael Schumacher.

It is wet before the start, with a greasy track surface. Stoll sits on his first pole ahead og Verstappen.

At the appointed time the drivers came around to the start, the lights went out and the race started and Stroll took the lead, Verstappen with a slow start and falls back to eighth, Ricciardo and Ocon touch in turn one, Bottas spins.

At lap 1, Stroll and Perez in the top two spots followed by Vettel, Verstappen, Albon, Hamilton, Ricciardo, Raikkonen, Sainz and Magnussen in tenth.

On lap 4, Stroll leads his team mate Perez by 5.8 seconds, Vettel in third is 14.9s behind the leader. Stroll tells the team that the track is drying out.

Verstappen is closing on Vettel in third. Sainz passes Raikkonen for eighth.

On lap 7 Leclerc pits for intermediates and rejoins in 19th behind Ocon.The next lap Bottas pits. Vettel pits from third the next lap, Hamilton, Raikkonen, Magnssen, Giovinazzi, Kvyat and Grosjean pit as well.

On lap 9 Stroll pits from the lead for intermediates, he rejoins in fourth.

On lap 11 Perez, Ricciardo, and Sainz all pit, Verstappen takes over the lead, both Red Bull’s haven’t pitted on the full pits.

On lap 12 Verstappen pits from the lead, Albon takes over with Stroll charging in second, followed by Perez, Verstappen, Vettel, Hamilton, Ricciardo, Sainz, Magnussen and Leclerc in tenth.

On lap 13 Albon pits from the lead and rejoins sixth.

Hamilton trys to pass Vettel, but can’t get it done.

Giovinazzi pulls off the track with a mechanical problem. The virtual safety car is out.

On lap 14 they are back racing.

Hamilton trys to pass Vettel, but overshoots and Albon passes Hamilton and Vettel for fourth.

On lap 18 Verstappen trys to overtake Perez in second, spins, then pits with a flat spot - he rejoins in eighth place.

Stroll and Perez start looks around for wet track to keep their tyres cool.

Perez running slightly faster than Stroll in the lead is edging closer each lap. Hamilton is starting to pick up pace, and runs 11 seconds behind the leader in fifth.

All they drivers are trying to make their intermediate tyres last until it is dry enough to switch to dry tyres.

Hamilton tells the team that is won’t get dry enough for dry tyres and should pit again for new intermediatees.

Albon spins at turn 4 and gets going again, but loses a place to Hamilton, then pits and rejoins sixth. Magnussen pits.

Hamilton asks how far the intermediate tyre will last.

On lap 37 Stroll pits from the lead for new intermediates, and rejoins in fourth, Perez takes over the lead.

Hamilton passes Perez for the lead.

Stroll complains that his new intermediates are already graining.

On lap 40 Vettel then Leclerc pass Stroll for fourth and fifth.

Black clouds are on the horizon, and teams are thinking that there is rain in store for the last ten laps.

Latifi retires in the pits.

On lap 44 Verstappen pits from third for new intermediates and rejoins in seventh.

Mercedes tells Hamilton that they thinks his tyres will last until the finish.

On the final lap Leclerc tries to pass Perez for second place, locks up, Perez keeps the position, Vettel gets by for third.

Across the line Hamilton wins ahead of Perez and Vettel.