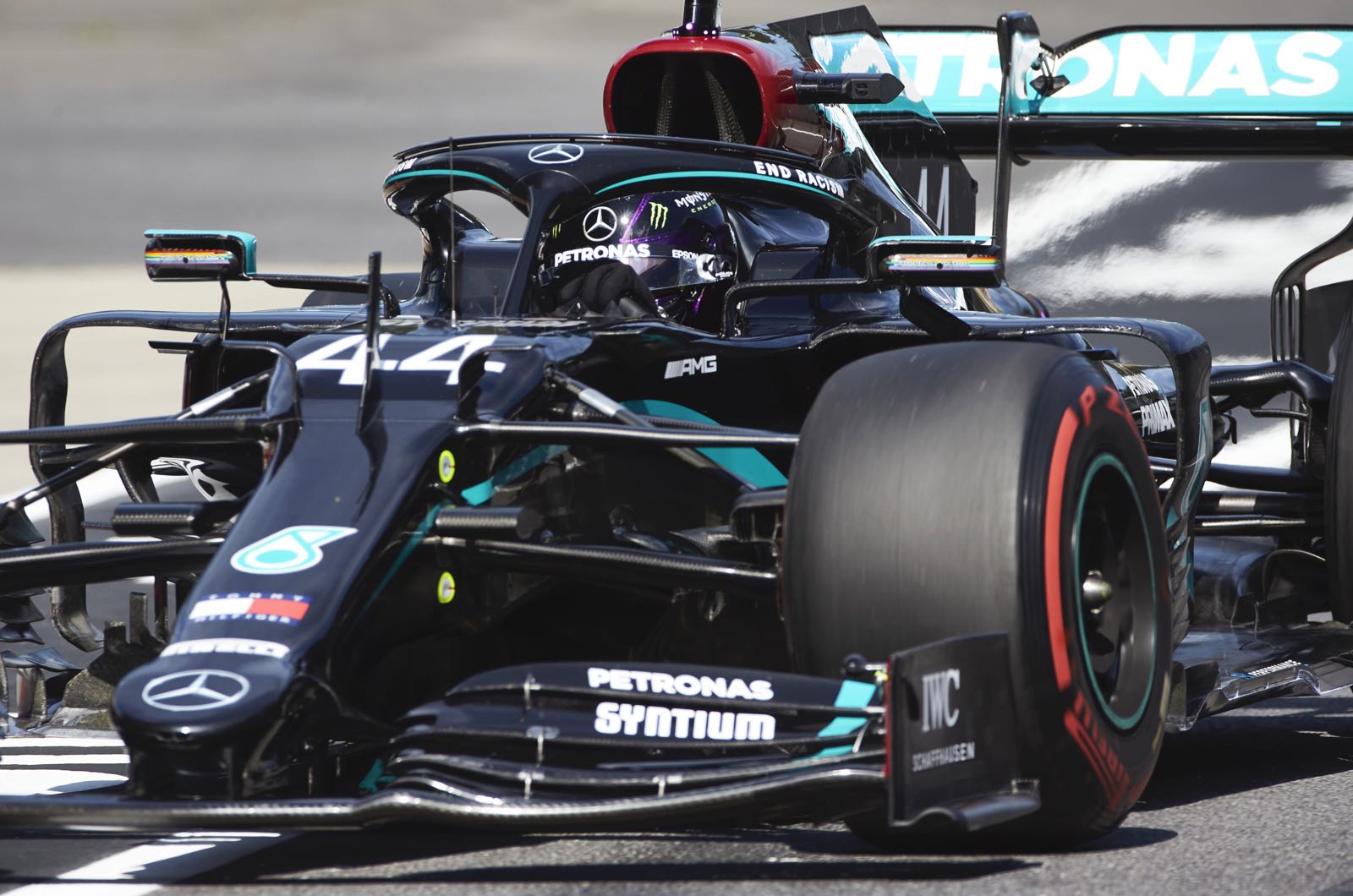 Lewis Hamilton won the Steiermark Grand Prix at the Red Bull Ring today in a Mercedes one-two finish with Valtteri Bottas in second place, 13.719 seconds behind.

Max Verstappen in his Red Bull-Honda finished in third place, 33.698s behind the winner.

Alex Albon (44.400s) in the second Red Bull finished in fourth, followed by Lando Norris (1m01.470s) in the McLaren-Renault was fifth, Sergio Perez in the Racing Point-Mercedes was sixth, followed by his team mate Lance Stroll (1m02.453s) in seventh, Daniel Ricciardo (1m02.470s) in the Renault was eighth, Carlos Sainz (1 lap) in the second McLaren was ninth and Daniel Kvyat in the AlphaTauri-Honda took the final point in tenth place.

For a second week running, for the first time, we have a second Grand Prix from the same circuit, the Steiermark Grand Prix at the Red Bull Ring.

In a rain soaked qualifying session Hamiton took pole, over Verstappen in second place on the grid. Sainz and Bottas line up on second row, Ocon and Albon on row three, Gaasly and Ricciardo on row four, Norris (with a 3-place grid penalty) and Vettel rounding out the top ten. The top seven starters on soft tyres, Ricciardo, Vettel, Kvyat, Raikkonen, Latifi and Giovinazzi on medium tyres. Grosjean starting from the pitlane.

With the rain going away overnight, the weather was fine for the race, and at the appointed time the drivers came around on the warmup lap. The lights went out and the race began with Hamilton taking the lead, with Verstappen, Sainz, Bottas, Albon, Ocon and Ricciardo following. Leclerc tries to dive down the inside of Vettel and the two touch - Vettel with a broken rear wing. The safety car is out as the two Ferrari’s pit, Leclerc taking hard tyres, Vettel retires.

The safety car is in at the start of lap 3 and the race restarts with Hamilton staying in the lead, Norris passes Strol for ninth place, Russell passes Magnssen for 11th, but then goes off track and falls back to 18th.

On lap 6, Bottas passes Sainz for third place, 6.0s behind the leader.

On lap 17 Ricciardo challenges Ocon for sixth, while Stroll passes Gasly for eighth, and right away Perez passes Gasly as well.

Bottas is slowing closing on Verstappen in second place.

On lap 24 Verstappen pits and takes on medium tyres, and rejoins in third place. Gasly pits as well, Ocon pits from seventh place and retires.

On lap 27 the leader Hamilton pits and changes to medium tyres, rejoining in second place behind Bottas.

On lap 34 Bottas pits from the lead for medium tyres and rejoins in third place, 8s behind Vertstappen.

The next lap Albon pits from fourth for medium tyres and rejoins in seventh.

On lap Kvyat pits, while Stroll passes Giovinazzi and Sainz passses Raikkonen for tenth. Ricciardo pits for soft tyres and rejoins in seventh.

Perez pits from fourth for medium tyres and rejoins in eighth.

Perez sets fast lap at 1,07.578s. Stroll is looking for a way past Ricciardo in sixth. Perez is closing on Albon in fourth.

Verstappen is reported to have some minor front wing damage.

On lap 62 Norris passes Sainz, who is strugging on his tyres, for eighth.

Bottas has closed to within a second of Verstappen in second placce.

On lap 65 Norris sets fast lap at 1m07.286s. Bottas makes an attempt to pass Verstappen, they go side-by-side by Verstappen keeps the position. The next lap Bottas makes the same move, but makes it stick this time and takes second place.

Verstappen pits for soft tyres as well, everyone in a safe position making a fast lap attempt.

Perez makes a go at Albon in fourth, the two touch slighty and Albon keeps the position.

Stroll passes Riccuardo for sixth, Norris follows Stroll through and challenges him and passes him.

On the last lap Norris passes Perez for fifth place.

Hamilton wins over his team mate Bottas in second, and Verstappen in the Red Bull in third.