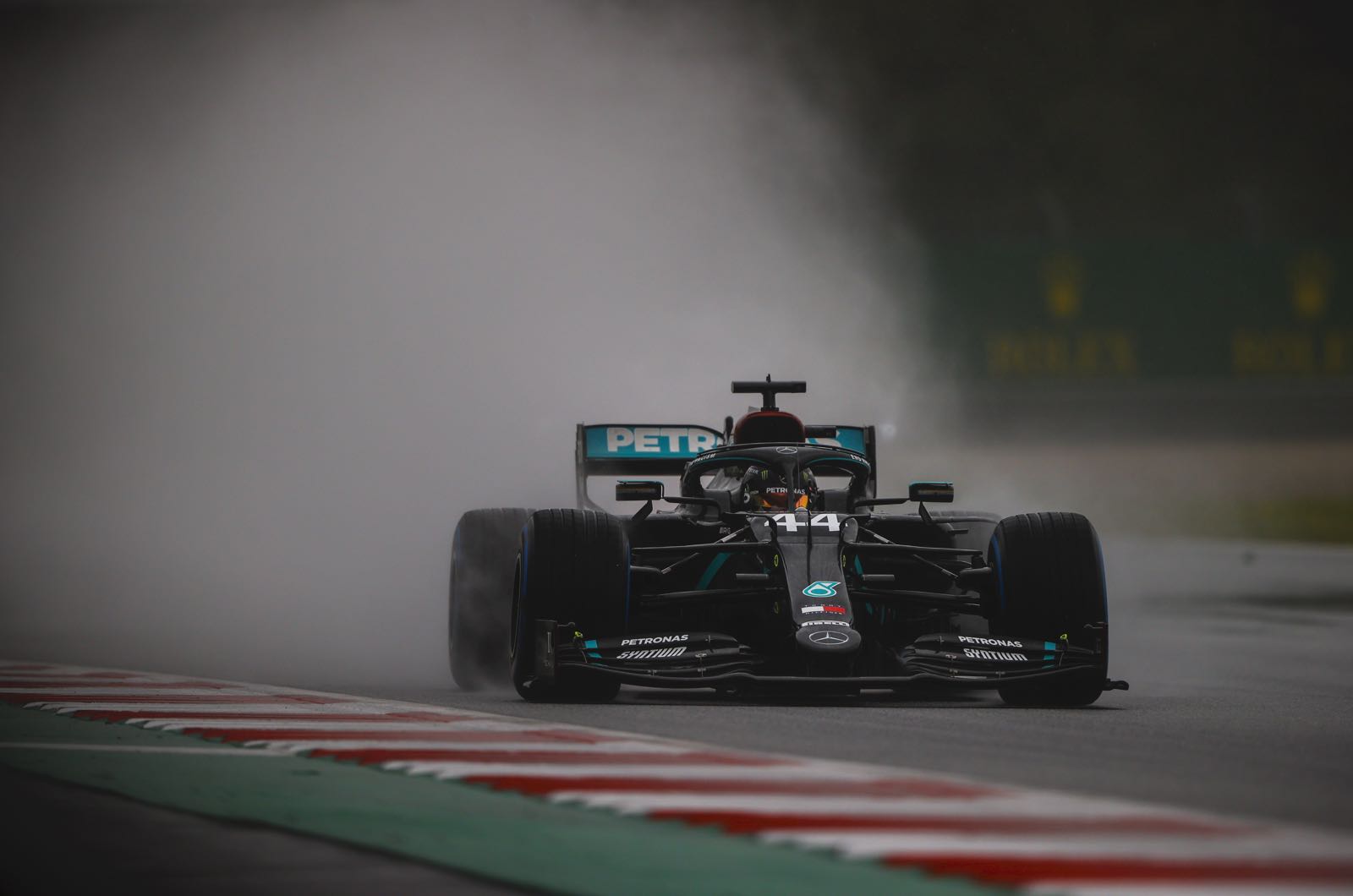 The Free Practice 3 session earlier in the day had been canceled due to torrential rain. And the start of qualifying was delayed by 46 minutes because of rain. But there was no delaying Lewis Hamilton who grabbed the pole on a slippery track in his Mercedes. It is his 89th career F1 pole.

"What a tricky day," Hamilton said. "I love these days!"

The drivers lined up at pit exit as they were anxious to get laps in as soon as possible because more rain was on the way.

"I can't see a thing!" Verstappen radioed from the spray.

Grosjean slid off the track and returned to the pits.

With six minutes remaining in Q1, Ricciardo was 15th and on the bubble. Latifi was 14th and Russell was 16th.

The lead kept changing from Bottas to Norris to Sainz to Hamilton. Giovinazzi had a big spin at Turn 10 but managed to keep going. But he then parked the car at Turn 4, which brought out the red flags with 11 seconds remaining.

The five drivers who were eliminated at the end of Q1 were: Raikkonen, Perez, Latifi, Giovinazzi and Grosjean.

Bottas took the lead with a 1:19.006. Verstappen was second but a full second slower than Bottas.

With seven minutes left in the session Leclerc was 10th and on the bubble, and Vettel was ninth with Stroll 11th.

Verstappen lowed his time to a 1:17.938. With three minutes remaining he radioed that the rain was getting heavier. But by then Hamilton was on top with a 1:17.825

That was bad news for Leclerc who was 11th.

The fastest 10 drivers who moved on to Q3 were: Hamilton, Verstappen, Norris, Bottas, Gasly Ocon, Sainz, Albon, Ricciardo and Vettel.

The five drivers who were eliminated at the end of Q2 were: Leclerc, Russell, Stroll, Kvyat and Magnussen.

Verstappen was the first out in the 12 minute Q3. The rain increased in intensity.

Verstappen went into the lead with a 1:21.800. Hamilton grabbed second ahead of Bottas, Ocon and Albon.

So Hamilton was on the pole with Verstappen second. Sainz, Bottas, Ocon, Norris, Albon, Gasly, Ricciardo and Vettel rounded out the top 10.