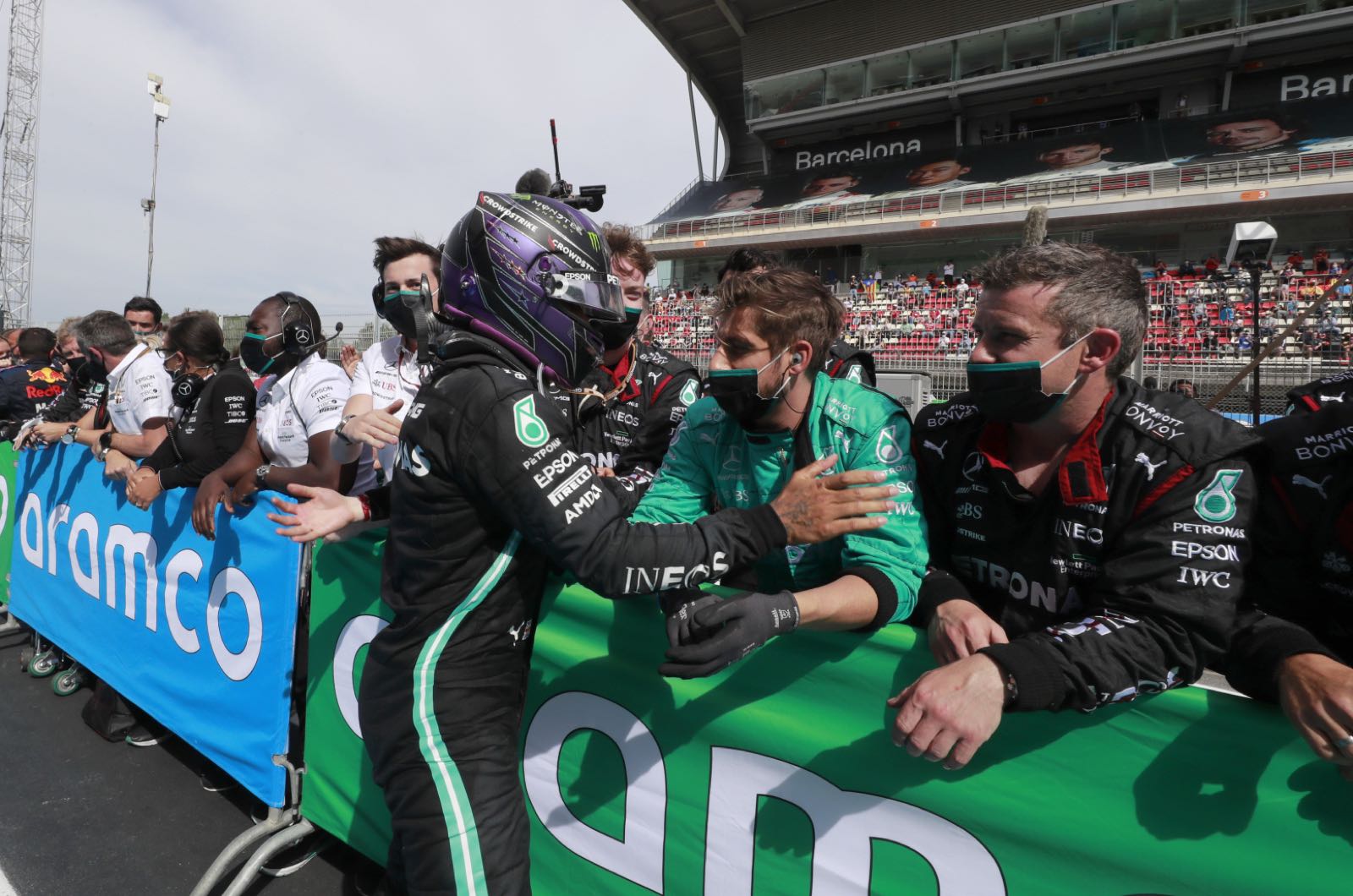 Lewis Hamilton won the Spanish GP in his Mercedes GP, 15.841 seconds ahead of Max Verstappen in his Red Bull-Honda, after Verstappen took the lead on the first lap and held the top position for 60 laps.

Valtteri Bottas in the second Mercedes finished third, 26.610 seconds behind the winner.

The win is Hamilton’s third out of four races of the season, his sixth career Spanish Grand Prix victory, and 98th career win. Hamilton now leads Verstappen by 14 points in the Drivers championship.

Charles Leclerc (54.616s) in the Ferrari finished fourth, followed by Sergio Perez (1m03.671s) in the second Red Bull was fifth, Daniel Ricciardo (1m13.768s) in the McLaren-Mercedes was sixth, Carlos Sainz (1m14.670s) in the second Ferrai was seventh, Lando Norris (1 lap) in the second McLaren was eighth, Esteban Ocon in the Alpine-Renault was ninth and Pierre Gasly in the AlphaTauri-Honda took the final point in tenth.

Before the start the weather was cloudy with spots of rain, but rain isn’t expected during the race, with only a 20% chance.

Hamilton starts from his 100th pole, with Verstappen alongside on the front row. Bottas and Leclerc on row two, Ocon and Sainz start on row three, Ricciardo and Perez start on row four and Norris and Alonso round out the top ten.

The quickest tyre strategy is projected to be to start on soft tyres, and switch to medium tyres in the middle of the race and finish again on soft tyres.

90% of the races at Barcelona have been won from the front row.

At the appointed time the drivers came around on the formation lap, the lights went out and the race began with Hamilton gets a slightly slow start and coming into turn one, Verstappen takes the lead over Hamilton, Leclerc, Bottas, Ricciardo, Perez Ocon, Sainz, Norris and Alonso in tenth.

At the end of lap one Verstappen has a 1.5 second lead.

Gasly is under investigation for being out of place on the start.

Bottas is trying to challenge Leclerc in third.

On lap 8 at the outside of turn 10 Tsunoda stops on-track, saying the engine just stopped.

The Safety car is deployed.

On lap 11 the race resumes and Verstappen still leading Hamilton and Leclerc.

Gasly is handed a five-second penalty from the start.

Hamilton is trailing Verstappen by about 1 second, and his right rear tyre seems to be blistering slightly.

On lap 19 Gasly pits for medium tyres and takes his 5-second penalty and rejoins 19th.

On lap 22 Alonso pits from 11th along with Vettel.

The next lap Sainz and Stroll both pit.

On ap 25 Verstappen pits from the lead for medium tyres, and rejoins in fifth with a slightly slow stop.

On lap 28 Perez pits from fifth and rejoins in eighth.

On lap 29 Hamilton pits from the lead for medium tyres, and rejoins behind Verstappen.

Leclerc pits as well and rejoins fourth behind Bottas.

On lap 32 Hamilton sets another fast lap, and closes the gap to 1.1 seconds.

On lap 34 Hamilton closes to within DRS range.

Russell complains that the wind is picking up.

The question for the leaders is whether they can

Hamilton is at times within half a second of the race leader.

Perez is closing on Ricciardo in fifth.

On lap 42 Hamilton pits from second place for another set of medium tyres and rejoins in third behind his team mate.

Sainz pirs as well for soft tyres and rejoins ninth.

Vertappen “I don’t see how we are going to make it.”

On lap 54 Bottas pits for soft tyres, rejoining in fourth behind Leclerc.

Hamilton is 3.0 seconds behind Verstappen.

On lap 58 Perez pits for a second time for soft tyres and rejoins in fifth.

On lap 59 Hamilton is only a second behind the leader.

Leclerc pits from fourth for soft tyres and rejoins stil in fourth.

On lap 60 Hamilton passes Verstappen for the lead into the first corner.

Verstappen pits the next lap for soft tyres and remains in second place.

On lap 61 Alonso, Stroll, Gasly, Raikkonen and Vettel all fighting for tenth place.

On lap 62 Stroll and Gasly get past Alonso.

At the finish Hamilton takes the chequered flag over Verstappen and Bottas.