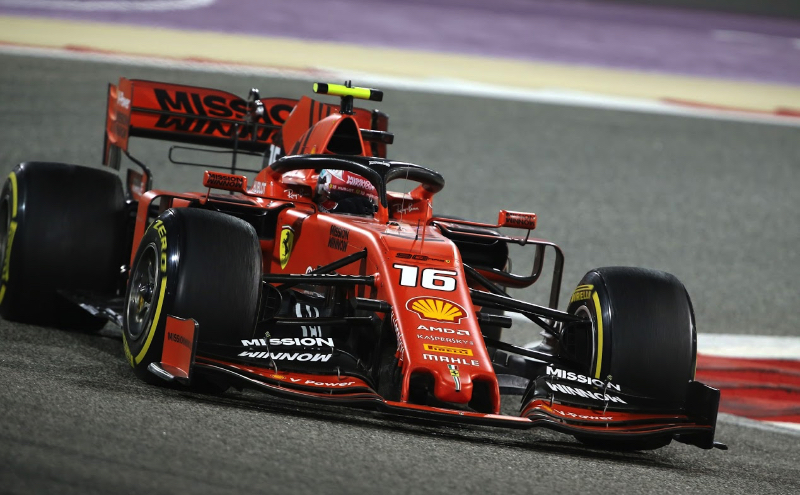 By Dan Knutson in

"Look at the time! I lost control maybe three times that lap!" Charles Leclerc screamed over the radio as qualifying for the Singapore Grand Prix ended. Actually he was well in control after he earned his third consecutive pole in the Ferrari.

Perez would have to take a five-place grid penalty for a gearbox change after he hit the wall in FP3.

"I have no power," Sainz radioed. Not a good way to start FP1 for the McLaren driver. But then the power returned.

Out front, Leclerc posted a 1:38.014, which put him ahead of Verstappen, Bottas, Hamilton, the powered Sainz, Vettel and Albon with 10 minutes left in the session. The two Mercedes drivers were on the medium compound Pirelli tires while the others ran the softs.

On the bubble in 15th place with six minutes remaining was Stroll. Perez was 14th and Raikkonen was 16th.

Everybody was back in the pits with five to go. Then Bottas and Hamilton, now on the soft tires, headed for the track. The rest, of those who would go back out, waited.

Back in 15th, Stroll stayed put, but he was pushed to 17th in the final moments.

The five drivers who were eliminated at the end of Q1 were: Kvyat, Stroll, Grosjean, Russell and Kubica.

Q2 lasted 15 minutes. Unlike Q2 at some other circuits, the drivers could not risk going out on the medium compound Pirellis. So it was "reds" all around. And soon all 15 soft tire cars were on track.

Raikkonen had slapped the wall hard but made it back to the pits.

With seven minutes to go, Hulkenberg was 10th and on the cutoff line. Ricciardo was ninth and Giovinazzi was 11th.

With four minutes to go, everybody was in the pits. But then the started to return to the track.

With less than two minutes to go, all 15 drivers were in action.

Vettel grabbed the tops spot at 1:36.720. Leclerc squeezed ahead at 1:36.650. Hamilton wound up third ahead of Verstappen and Bottas.

The five drivers who were eliminated at the end of Q2 were: Perez, Giovinazzi, Gasly, Raikkonen and Magnussen.

The fastest 10 drivers who moved on to Q3 were: Leclerc, Vettel, Hamilton, Verstappen, Bottas, Norris, Albon, Sainz, Ricciardo and Hulkenberg.

The crucial Q3 lasted 12 minutes. The better the qualifying, the better the race result on this track where it is so difficult to overtake.

All 10 drivers were soon on track. And getting in each other's way.

Vettel was first with his 1:36.437. Leclerc went second with his 1:36.791. Verstappen took third ahead of Hamilton, Bottas, Albon, Sainz, Norris, Ricciardo and Hulkenberg.

Now things were really crucial as the drivers had one last shot at improving their times in the last few minutes. Vettel was first back out; Hamilton was last.

But Vettel abandoned his run. Leclerc improved to 1:36.217 to take another pole. Hamilton's slid into second ahead of Vettel, Verstappen, Bottas, Albon, Sainz, Ricciardo, Hulkenberg and Norris.