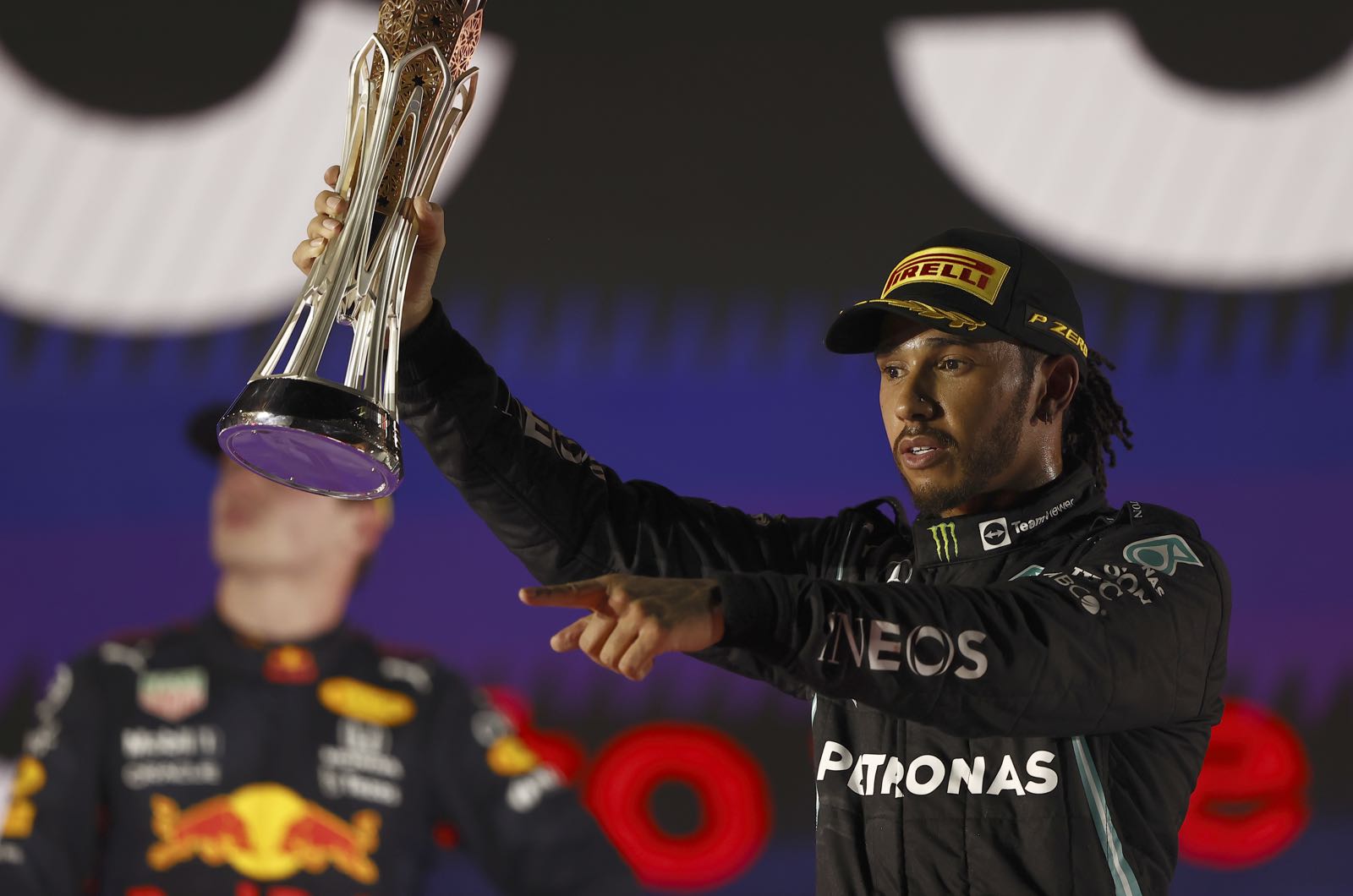 Lewis Hamilton won the inaugural Saudi Arabian Grand Prix in his Mercedes GP, in a crazy race ahead of Max Verstappen in his Red Bull-Honda, 11.825 seconds behind with an additional 5-second penalty. Valtteri Bottas (27.531s) took third place in his Mercedes GP on the final straight over Esteban Ocon (27.633s) in his Alpine-Renault who finished fourth.

The win in Hamilton’s 103rd career win, and Hamilton and Verstappen go into the final race equal on points, both with 369.5 points.

Daniel Ricciardo (40.121s) in the McLaren-Mercedes finished fifth, followed by Pierre Gasly (41.613s) in AlphaTauri-Honda was sixth, Charles Leclerc (44.475s) in the Ferrari was seventh, his team mate Carlos Sainz (46.606s) was eighth, Antonio Giovinazzi (58.505s) in the Alfa Romeo-Ferrari was ninth and Lando Norris (1m01.358s) in the second McLaren was tenth.

Before the start Hamilton is on pole with his team mate Bottas in second place. Verstappen, after not making a gearbox change when the team fixed the Red Bull overnight, starts third, Leclerc starts in fourth. Perez and Gasly start on row 3, Norris and Tsunoda start on row four, and Ocon and Giovinazzi round out the top ten on the grid.

Pirelli projects the fastest strategy is a one-stopper, starting on medium tyres and changing over to hard tyres.

At the appointed time under the lights, the grid made the formation lap, the start-lights went off, and the race began with Hamilton takes the lead over Bottas, Verstappen, Leclerc, Perez and Norris.

After the first lap the two Mercedes of Hamilton and Bottas lead, with Verstappen following.

On lap 9 Schumacher crashes, and the safety car is out.

Hamilton pits for hard tyresm Bottas, Leclerc and Perez all pit. Verstappen stays out and takes the lead behind the safety car.

The officials decide the barriers need to be fixed and the race is suspended and all the drivers come to a stop in to pittance. All drivers will be able to change tyres during the stoppage.

The field comes around with Verstappen on hard tyres, Hamilton on his same hard tyres. Ricciardo, Perez, Sainz and Vettel on medium tyres.

With 15 laps completed, the field lines up on the grid, the lights go out and the race resumes with Verstappen getting off slow, Hamilton going into turn one ahead, but Verstappen pushes his way back into the lead and Ocon gets past Hamilton as well.

Behind Leclerc and Perez touch and Mazepin rearends Russell. The safety car is out again.

The cars go back to the pittane. During the stoppage Massi offers to not make a penalty if Verstappen makes the restart behind Ocon and Hamilton. Red Bull says they will accept it.

The field comes around with Ocon followed by Hamilton, Verstappen, Ricciardo, Bottas, Gasly, Leclerc, Giovinazzi, Sainz and Vettel in tenth.

The cars come around to the grid, the lights go out and the race restarts with Ocon getting off the line first but Verstappen goes down the inside of Hamilton into the first corner, and takes the lead over Ocon out of the first corner.

Verstappen reports to the team “lack of power”. The team tells him that the battery is just topping off.

On lap 34 Tsunoda touches Vettel and his front wing is damaged. He limps around to the pits, the virtual safety car is out.

On lap 24 the virtual safety car is ended and the race continues.

Tsunoda is given a 5-second penalty.

On lap 27 Raikkonen pits and takes on a new front wing.

The virtual safety car is out for debris, it is cleared and the race resumes.

Alonso complains that there is a lot of debris still on the circuit.

The virtual safety car is out again.

On lap 33 the virtual safety car ends and Verstappen leads Hamilton by 1.7 seconds.

On lap 34 Hamilton sets fast lap at 1m31.411s and trails Verstappen by 1.4 seconds. There is additional debris on the track.

On lap 35 Hamilton sets another fast lap at 1m31.199s. Another virtual safety car is called, but it ends almost immediately. Hamilton trails by under a second, Hamilton gets DRS, the two go side-by-side into the first corner, Verstappen comes out still in front. Red Bull tells Verstappen to give the position back and Verstappen slows down on the straight and Hamilton touches him and his front wing is damaged. Hamilton tells the team “he brake-tested me”.

Mercedes tells Hamilton that race control has instructed Verstappen to give the place back.

On lap 42 Verstappen lets Hamilton by, but then immediately passes Hamilton back.

On lap 43 Hamilton passes Verstappen, and doesn’t give him a chance to come back and takes the lead.

Bottas is catching Ocon in third.

Hamilton crosses the line first followed by Verstappen and Ocon.