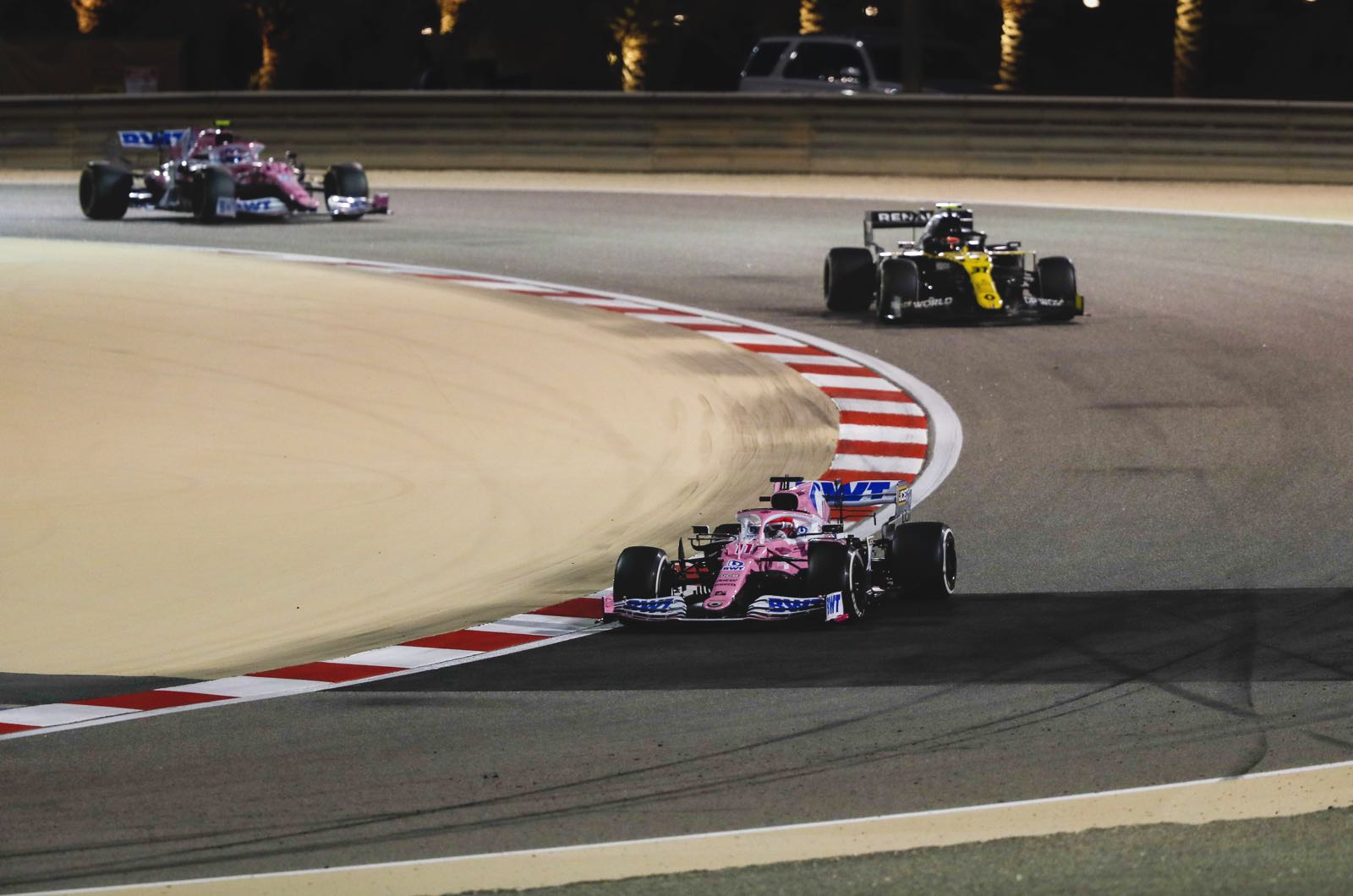 Sergio Perez won the Sakhir Grand Prix in Bahrain in his Racing Point-Mercedes, 10.518 seconds ahead of Esteban Ocon in the Renault. Lance Stroll in the seconds Racing Point was third on the podium, 11.869 seconds behind the winner.

After George Russell dominated for most of the race, a late race botched pit stop for both Mercedes drivers during a Safety car lost the race for the dominant world championship constructor.

Perez is the first Mexican winner since the 1970 Belgian Grand Prix. It is the first win for Racing point team, and the team’s first double podium. Perez’s first win came on his 190th start.

Before the start, Bottas was on pole, with his Mercedes GP team mate Russell alongside on the front row, Verstappen in the Red Bull was third with Leclerc in the Ferrari on row 2, Perez and Kvyat on row 3, Ricciardo and Sainz on row 4 and Gasly and Stroll rounding out the top top.

The two Mercedes starting on medium tyres, the rest of the top ten starting on soft tyres.

A two-stop strategy expected to be the fastest, the first pit stops expected between lap 32-35.

At 10-after the hour the grid came around, the lights went off and the race began with Russell coming down the inside to take the lead over Bottas. Raikkonen spins at the second corner. At turn 4 Perez turns in and comes together with Leclerc - Verstappen goes wide to avoid, gets on the gravel and hits the barrier, Verstappen and Leclerc are out on the first lap - the Safety car is out.

At the end of lap 5 the race resumed with Russell leading over Bottas. Sainz battles with Bottas.

At lap 8 Russell leadsBottas by 1.5 seconds.

Vettel battles with Albon. Albon complains to the team, “we are so slow on the straights”.

The next lap Perez passes Albon for ninth.

The next lap Sainz and Gasly pit - Sainz rejoins in ninthm Gasly in 11th.

On lap 30 Ricciardo pits for medium tyres and rejoins tenth.

On lap 32 Vettel pits, Aitken and Fittipaldi pit as well.

Tyre wear is better than expected and the Mercedes yet to pit yet.

Bottas says his front tyres are starting to go off.

On lap 41 Ocon pits from fourth for hard tyres and rejoins in tenth place.

The next lap Stroll pits from third for medium tyres and rejoins in ninth - Ocon passes Stroll in the first corner for ninth place.

On lap 45 Russell pits for hard tyres and rejoins in second behind Bottas.

On lap 49 Bottas pits for hard tyres as well, and rejoins second.

Gasly pits from sixth for his second pit stop for hard tyres, and he rejoins in 12th.

Russell complains to the team that “the power on the straight is low.”

On lap 53 Kvyat pits from fourth for hard tyres and rejons in tenth.

On lap 55 Latifi has pulled off the side of the track - the Virtual Safety car is out. Norris, Vettel, Giovinazzi, Magnussen, Aitke, Raikkonen, Sainz and Ricciardo all pit.

The Virtual Safety car is finished - Stroll locks up and Perez ppasses for fourth. The next lap Perez passes Ocon for third.

Stroll is catching Ocon in fourth.

On lap 61 Aitken pits with a missing front wing amd the Virtual Safety car is out to clean the debris.

At lap 62 the full Safety car is out,Russell pits, Bottas double stacks inn the pits - there is trouble with Bottas front left, the brakes are on fire.

Russell has to pit again, as he has a mixed set of tyres - it turns out Mercedes saw the mixmatch for Bottas, and put back on the tyres he was already running on and sent him back out on the same hard tyres.

The Safety car lets the lapped runners through.

At the end of lap 68 the Safety car is in, and the race resumes with Perez keading Ocon, Stroll, Bottas and Russell.

On lap 72 Russell passes Stroll into the first corner for third place.

On lap 73 Russell passes Ocon for second at turn 4.

On lap 79 Russell has a puntured tyre and pits from second for soft tyres - he rejoins 14th.

On lap 86 Russell passes Norris to get back in the points.

At the finish Perez wins over Ocon and Stroll.