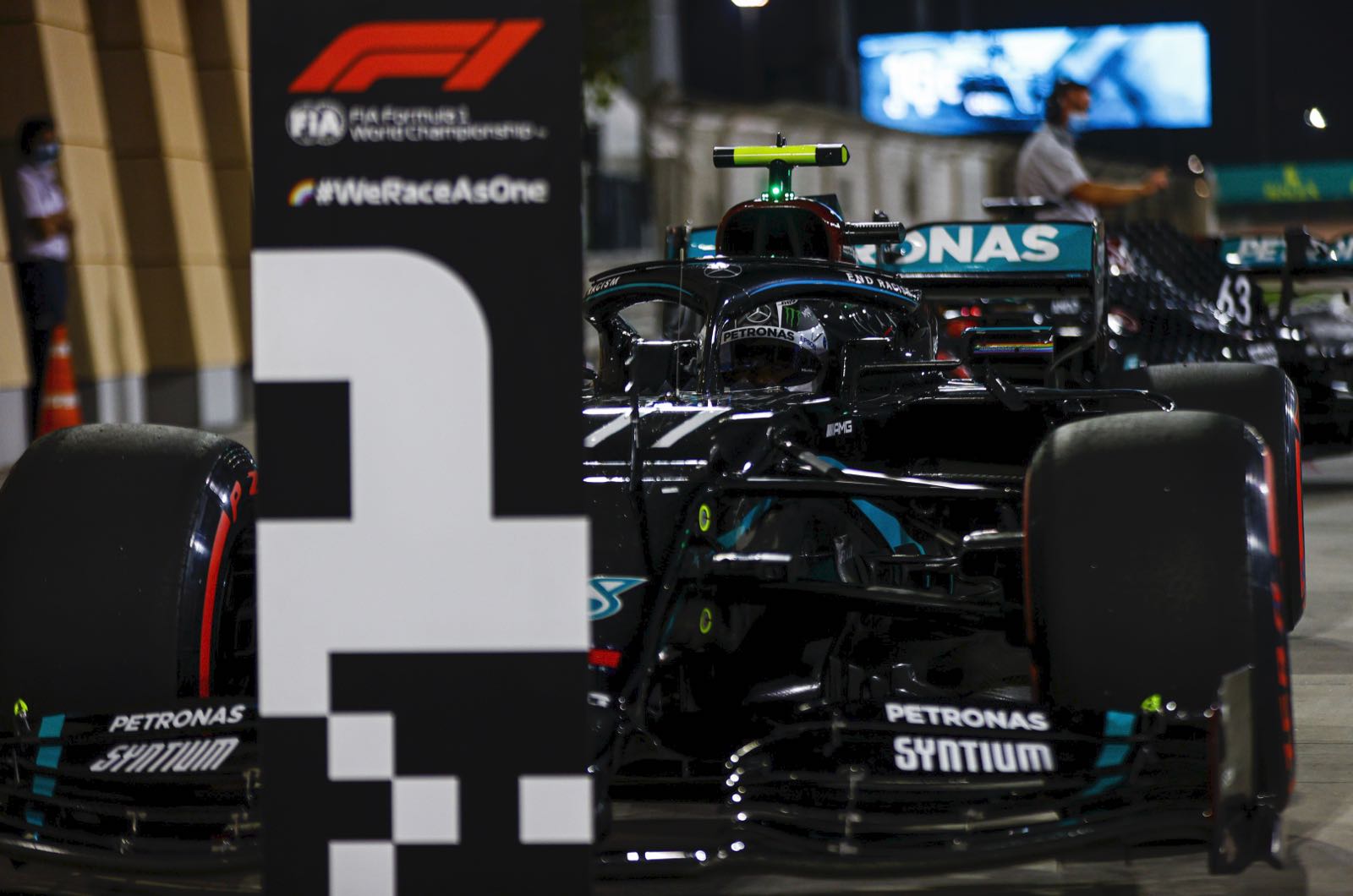 Valtteri Bottas earned the 16th pole of his F1 career after beating his new Mercedes teammate George Russell by the narrow margin 0.026 of a second in qualifying for the Sakhir Grand Prix.

Verstappen topped Free Practice 3 earlier in the day with a time of 54.064 seconds.

When there were six minutes remaining in Q1, Aitkin was 15th and on the cutoff line. Magnussen was 14th and Latifi was 16th. Verstappen, Perez, Ricciardo, Sainz, Stroll and Albon were out front.

But the cutoff line drivers kept changing, and the five drivers who were eliminated at the end of Q1 were: Magnussen, Latifi, Aitkin, Raikkonen and Fittipaldi.

All the drivers stayed in the garages when the 15 minute session began. But then Sainz took to the track.

The Ferrari and Mercedes drivers were on the medium compound Pirelli tires. So was Verstappen and the Renault drivers.

Russell slotted into second ahead of Verstappen and Kvyat. Perez rammed home a 0.53.787 to go ahead.

Tenth and on the bubble with five minutes to go was Ocon, and Ricciardo was ninth while Gasly was 11th. Perez, Bottas, Sainz, Russell, Stroll and Leclerc were the top six.

The five drivers who were eliminated at the end of Q2 were: Ocon, Albon, Vettel, Giovinazzi and Norris.

The fastest 10 drivers who moved on to Q3 were: Verstappen, Perez, Bottas, Sainz, Russell, Leclerc, Stroll, Kvyat, Ricciardo and Gasly. Everybody but Bottas and Norris had used the soft slicks in the end.

Q3 lasted 12 minutes. Bottas and Russell led the pack out of the pitlane.

Verstappen got to the top with a 0.53.591. Leclerc took second ahead of Bottas, Russell and Ricciardo.

Perez waited to go out and had a clear track and took fourth place.

The Mercedes guys went back out for a second run. Bottas rammed in a 0.53.377. Russell grabbed second at 0.53.519. So Verstappen, Leclerc, Perez and Ricciardo rounded out the top six.

But there was time for a final run. And afterwards the top 10 qualifiers were: Bottas, Russell, Verstappen, Leclerc, Kvyat, Ricciardo, Sainz, Gasly and Stroll.