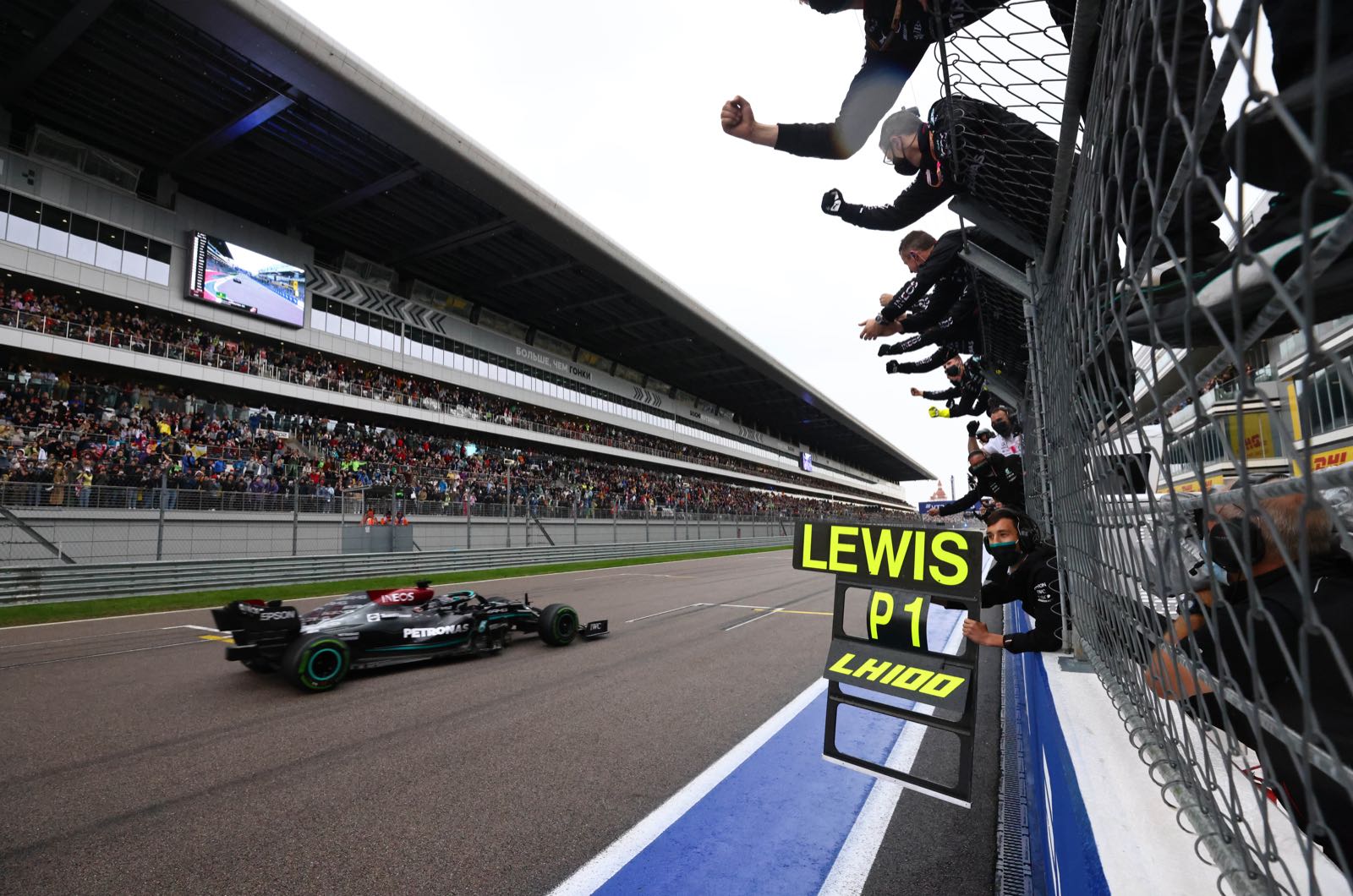 In a race that Lando Norris was leading in the closing stages, rain hit with 10 laps to go and Lewis Hamilton took his 100th Grand Prix victory in the Russian GP.

Max Verstappen, who started last, finished second in his Red Bull-Honda 53.271 seconds behind the winner.

Carlos Sainz in the Ferrari was third, 1m02.475 seconds behind the winner.

Hamilton retakes the Championship lead over Verstappen by two points.

Daniel Ricciardo (1m05.607s) in the McLaren-Mercedes finished fourth, followed by Valtteri Bottas (1m07.533s) in the second Mercedes was fifth, Fernando Alonso (1m21.321s) in the Alpine-Renault was sixth, Lando Norris in the second McLaren was seventh, Kimi Raikkonen (1m28.955s) in the Alfa Romeo-Ferrari was eighth, Sergio Perez (1m30.076s) in the second Red Bull was ninth and George Russell (1m40.551s) in the Williams-Mercedes took the final point paying position in tenth place.

Before the start Norris is on his first F1 pole, Sainz alongside on the front row. Russell and Hamilton starting on row 2, Ricciardo and Alonso on row 3, Stroll and Perez on row 4 and Ocon and Vettel rounding out the top 10. With engine penalties Bottas starts 16th, Leclerc 19th and Verstappen starting last in 20th. All on the top ten starting on medium tyres except Alonso and Perez on hard tyres.

At the appointed time the field came around and the lights went out and the race began with Sainz taking the lead over Norris with Russell, Strollm Alonso and Hamilton following.

Ricciardo passes Hamilton, then later in the lap past Alonso.

On lap 2 Hamilton passes Alonso on the outside for sixth..

A line is forming behind Russell, with Stroll, Ricciardo, Hamilton and Perez following close.

Leclerc tries to pass Vettel, but Vettel comes back and Verstappen follows him through.

On lap 13 Stroll pits from fourth for hard tyres and rejoins 15th.

On lap 13 Norris passes Sainz for the lead.

On lap 15 Sainz pits from second for hard tyres and rejoins in 13th ahead of Stroll.

The first ten yet to make a pit stop.

There is some rain sprinkles

Ricciardo pits from second for hard tyres with a slow stop, and rejoins in 14th.

Verstappen tells the team, “I can’t turn the car”, perhaps his tyres are used up.

On lap 29 Norris makes his pitstop from the lead for hard tyres and rejoins in fourth behind Leclerc.

Bottas pits for medium tyres and rejoins in 16th.

Ricciardo passes Stroll for eighth, Verstappen gets past Stroll as well.

Schumacher pits and retires his Haas.

On lap Hamilton passes Leclerc for fourth. Leclerc pits for medium tyres and rejoins in 13th.

Some talk of rain drops coming in 10 laps.

On lap 44 Hamilton trails Norris by under a second.

On lap 46 umbrellas are going up in the stands.

Sainz tell Ferrari to get ready to pit.

On lap 47 Norris goes wide and Hamilton is right on his tail.

Rain starts to fall harder and the drivers tip-toes around the track.Bottas pits for intermediates.

Vettel and Stroll touch but continue.

On lap 49 Ricciardo, Verstappen and Sainz all put.

On lap 50 Hamilton pits from second for intermediates and rejoins still in second, 25 seconds behind the leader.

Stroll spins into the outside wall.

On lap 51 Hamilton trails Norris by. 14.3 seconds, Norris is sliding all over the track.

Norris goes wide and Hamilton passes for the lead.

The rain in continuing to falls heavily.

On lap 52 Norris pits for intermediates and rejoins in seventh.