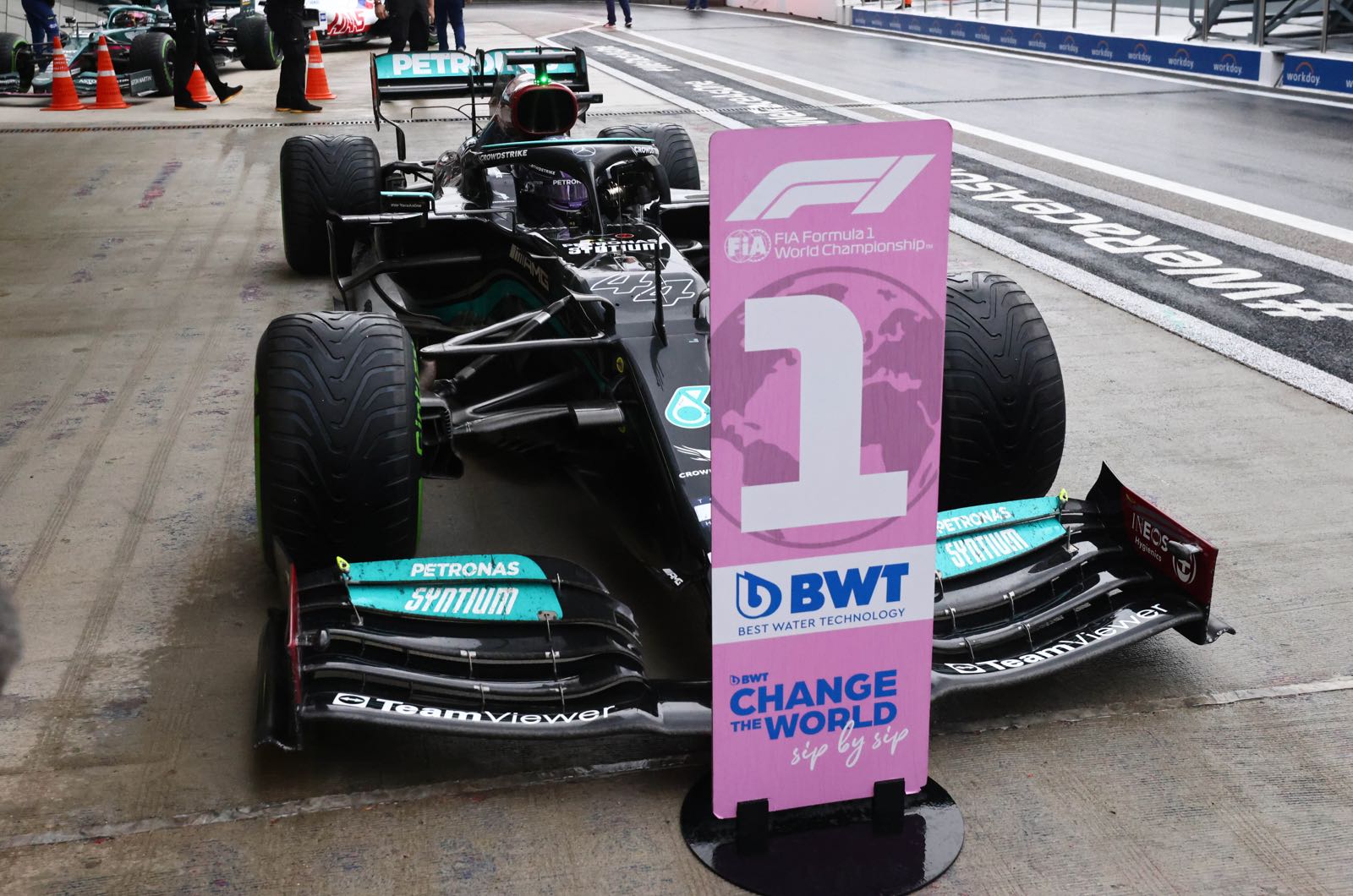 Lewis Hamilton won the 100th grand prix of his career after rival Lando Norris slid off in the rain. This is how Hamilton got his century.

Norris qualified his McLaren in the first slot – the first pole of his F1 career,

He is the 102nd driver to win a pole for a world championship F1 race.

After making several mistakes in qualifying, Hamilton could only qualify his Mercedes fourth.

Sainz took the lead at the start of the 53 lap race.

At the end of lap 1 the order was: Sainz, Norris, Russell, Stroll, Ricciardo, Alonso and Hamilton.

Prior to this Sainz had only led five F1 laps.

Lap 13 was a lucky one for Norris as he took the lead.

Norris pitted at the end of lap 27, handing the lead to Perez who had stayed out while others pitted.

Norris went back out front when Perez stopped at the end of lap 36.

Hamilton was now second and chasing hard after Norris.

Rain was looming and moved in over the Turn 5 area.

"Spitting quite a bit," Norris radioed on lap 45.

Verstappen, Sainz and Ricciardo pitted at the end of lap 48 to switch to intermediate rain tires.

Mercedes told Hamilton to pit at the same time, but he declined. However he pitted a lap later.

The problem was that half the track was wet and the other half was dry.

When McLaren asked Norris if he wanted to pit he said: "NO!"

At the start of lap 50 Norris had a 25 second lead over Hamilton, but the latter was closing fast.

On lap 51 Norris slid off the track and Hamilton took the lead.

Norris got back on to the track and finally pitted. He would finish seventh.

"Right at the end when the rain started, we made the call not to box and that cost us everything," Norris said. "We made the decision that was right at the time for the conditions at the time.

"It was my call, along with the information from the team, and together we need to review what we could've done better. It's incredibly disappointing of course, because we've been strong all weekend and I felt comfortable with the pace and the car today."

"This was a tricky but positive weekend for me, with a good quali and a strong race where I gave absolutely everything," Sainz said after finishing third.

Verstappen went from last to second.

"It was a crucial call to change to the inters," he said. "It was really slippery on track and we made a great decision with the timing and took the right lap to pit.

"A lot of things can happen when you're starting from the back of the grid, especially on the first lap when other cars are fighting each other, but we stayed out of trouble, kept it clean, and managed our race very well.

"The race itself was not very easy, it was difficult to pass other cars and once you got stuck it was easy to damage your tires but luckily in the end the rain helped us make the last jump in positions."

"Wow...100!" Hamilton said. "It's taken a long time and I wasn't even sure the 100th would come! Going to bed last night I wasn't the happiest with the job I did yesterday. I watched the replay over and over again; they were subtle mistakes but I was so determined to put things right when I woke up this morning.

"Today was tough - I lost a lot of ground at the start, just trying to stay out of trouble. I was patient and at the end, when the rain came, I didn't want to let Lando go by boxing. Of course I didn't know what the rain was doing, it was just my feeling but I'm incredibly grateful to the strategy team for the job they did today."

Hamilton retook the lead in the world championship from Verstappen.