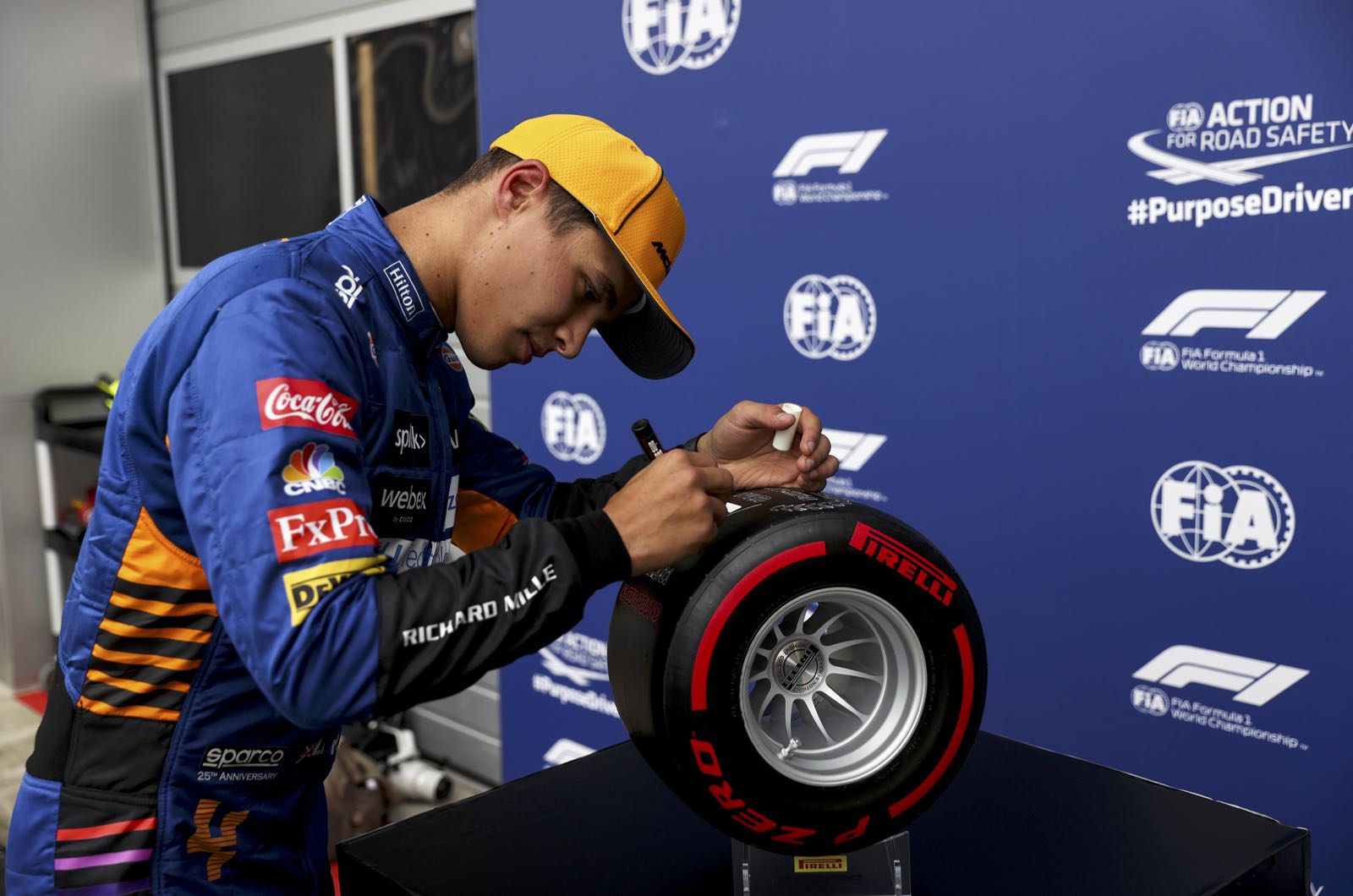 It feels amazing," Norris said. "It was quite a manic session. I risked quite a bit but it paid off." McLaren its first pole since

Heavy rain forced race official to cancel Free Practice 3, but a break in the weather meant that qualifying would go ahead on a drying track.

No matter where they qualified, Leclerc, Latifi and Verstappen would start at the back of the grid because they had new power units in their cars.

The drivers, except Alonso, headed out on Pirelli's intermediate wet rain tires in what was no doubt going to be a tricky 18 minute session. This was the first time ever that F1 cars had been on the Sochi track in wet conditions.

Verstappen did not bother to take the risks of doing a lap.

It was on of those sessions where the drivers stayed on track and the times got faster as that track dried out.

Hamilton posted a 1:46.937 to take the lead ahead of Bottas, Gasly and Leclerc. Giovinazzi had a quick spin.

The five drivers who were eliminated at the end of Q1 were: Raikkonen, Schumacher, Giovinazzi, Mazepin and Verstappen.

The track continued to dry but conditions were still tricky.

And, again, the order changed constantly. Hamilton was out front ahead of Norris and Gasly. Then Bottas took the lead.

Tenth and on the bubble with six minutes to go was Ricciardo, and Sainz was ninth while Alonso was 11th.

Then Hamilton went faster than Bottas. The key for some drivers was to pit for a new set of inters in the final minutes.

The five drivers who were eliminated at the end of Q2 were: Vettel, Gasly, Tsunoda, Latifi and Leclerc.

The fastest 10 drivers who moved on to Q3 were: Hamilton, Bottas, Alonso, Norris, Perez, Ocon, Stroll, Ricciardo, Russell and Sainz.

Q3 lasted 12 minutes and the racing line continued to dry out. But would it dry enough for the drivers to switch to slicks?

All the drivers were on inters at the start of the session as Hamilton took the lead ahead of Norris and Bottas.

Russell was the first to go on slicks. Norris, Sainz and Ricciardo did the same. And then the rest.

When Hamilton pitted he hit the wall and damaged the front wing.

And when it was over, Norris was on pole for the first time in his F1 career. Sainz qualified second. Russell, Hamilton, Ricciardo, Alonso, Bottas, Stroll, Perez and Ocon rounded out the top 10.