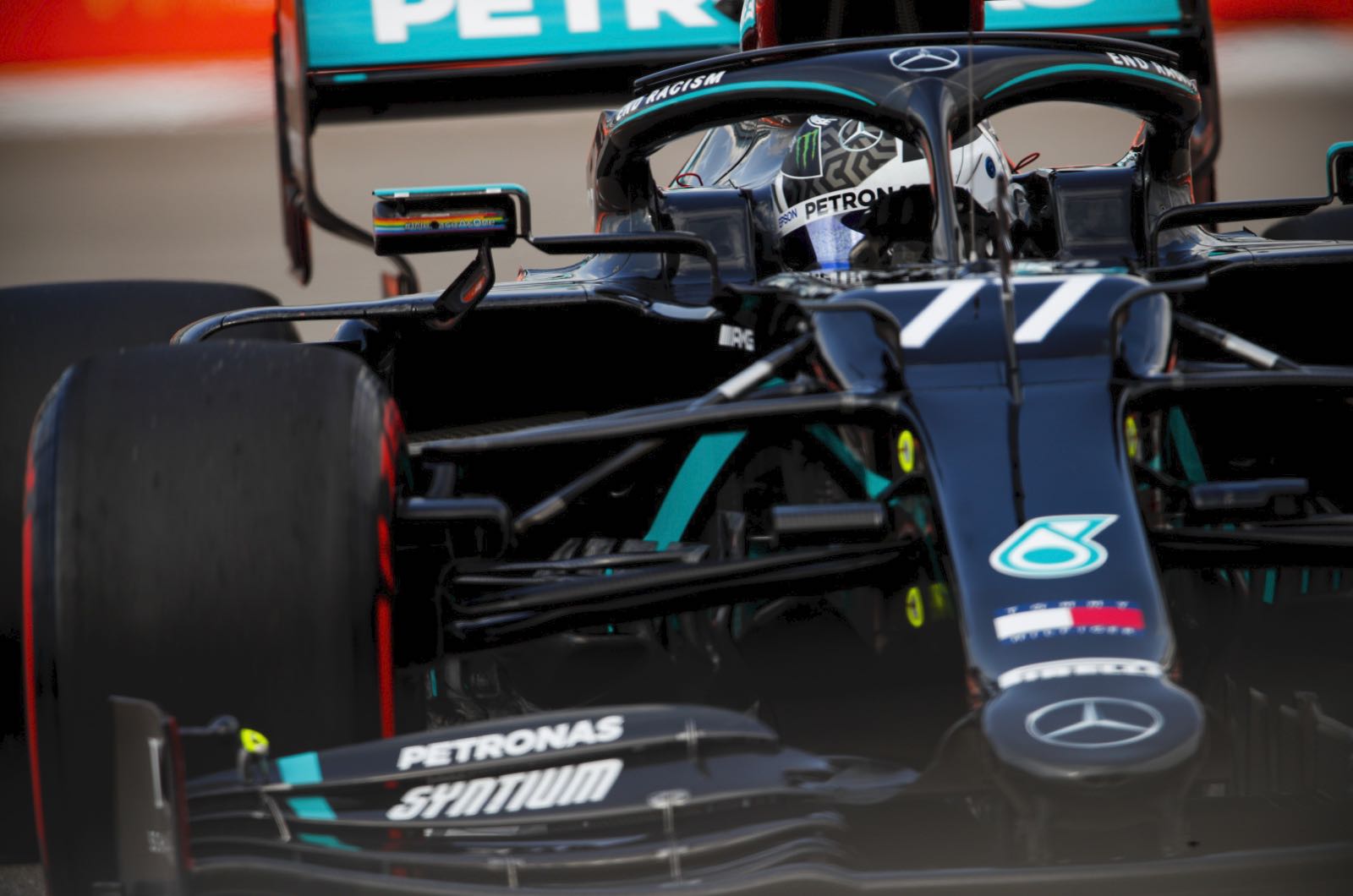 Valtteri Bottas won the Russian GP in Sochi in his Mercedes GP, 7.729 seconds ahead of second placed Max Verstappen in his Red Bull-Honda, and 22.729 seconds ahead of third placed Lewis Hamilton in the second Mercedes, after leading early on but receiving a 10-second penalty in the first pit stop.

The win is Bottas ninth of his career, and second in Russia, and second of the 2020 season. Mercedes has won eight of the ten races contested so far.

Before the start, Hamilton is on pole, with Verstappen alongside on the front row, Bottas and Perez make up the second row, Ricciardo and Sainz on row three, Ocon and Norris on row four and Gasy and Leclerc rounding out the top 10.

With Hamilton on soft tyres and Verstappen and Bottas on medium tyres, the question is whether he can keep them behind, and will he compromised for his stategy.

Also, in 4 out of the previous 7 races, there has been a safety car in the first part of these races.

The stewards are investigating in Hamilton made a practice start outside of the designated area.

At the apponted time the grid came round, the lights went out and Hamilton gets away first Bottas slots into second and gets slightly ahead on Hamilton on the outside of the first corner but can’t take the position, Verstappen goes wide at the first corner but continues and rejoins third, Ocon up to fourth, ahead of Ricciardo and Perez. Sainz spins and crashes. Later in the lap Stroll is spun from behind by Leclerc and crashes. The safety car is out.

At the start of lap 6 the race resumed with Hamiton contining in the lead.

On lap 7 Hamilton has a 1 second lead over Bottas.

Hamilton is handed a 5-second time penalty for making a pratice start outside the desigated start area during the pre-race period. How will the effect Hamilton’s chances?

Norris, Russell and Albon are all battling for 16th place. Russell locks up and Albon passes him for 16th, Norris passes Russell as well.

Mercedes tells both Hamilton and Bottas to up the pace.

On lap 16 Ricciardo pits from sixth, takes medium tyres and rejoins in 14th.

On lap 17 Hamilton pits from the lead, takes his 10-second penalty and changes to hard tyres and rejoins in 11th place.

Perez pits for hard tyres and rejoins in sixth.

Hamilton sounds frustated that he doesn’t think his tyres will last to the end of the race.

Verstappen pits from second for hard tyres and rejoins in fourth behind Kvyat, yet to pit.

On lap 26 Bottas pits from the lead for hard tyres and remains in front - Leclerc yet to pit is in second.

Leclerc pits from second for hard tyres and rejoins in seventh ahead of Ocon.

Kvyat pits for medium tyres and rejoins in eighth.

Gasly is challenging Raikkonen for ninth and passes him in the DRS zone.

On lap 37 Raikkonen pits for medium tyres and rejoins in 16th.

On lap 42 Vettel passes Grosjean for 14th place - the two touch but continue.

On lap 43 Gasly pits again for medium tyres and rejoins in 11th.

At the flag Bottas wins ahead of Verstapppen and Hamillton.