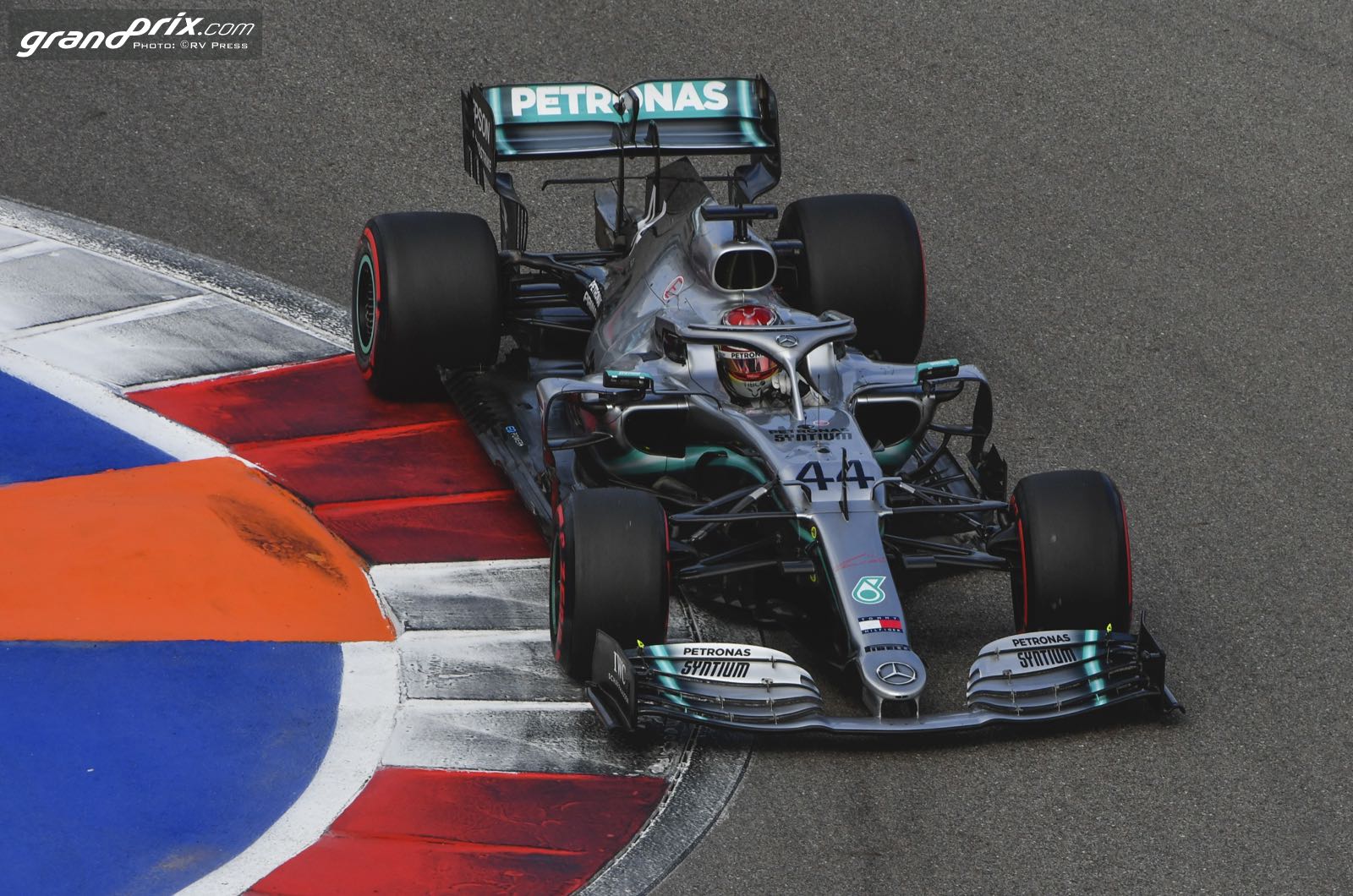 Lewis Hamilton won the Russian Grand Prix in his Mercedes GP, 3.829 seconds ahead of his team mate Valtteri Bottas in second. Polesitter Charles Leclerc finished third in the Ferrari, 5.212 seconds behind the winner.

All of the top ten started on soft tyres, except for the Mercedes of Hamilton from second and Bottas in fourth on the grid, both starting on medium tyres.

At the appointed time, the grid came around on the formation lap, the lights went off and the race started with Vettel getting Vettel made a run from third to first in the first corner taking the lead over Leclerc, Hamilton, Sainz, Bottas and Norris.

Ricciardo and Grosjean come together on the first lap, Grosjean ends up in the wall and the Safety car is out.

Kubica pits at the end of the lap and takes on hard tyres. Ricciardo pits for hard tyres as well.

The two Ferrari’s start to gain a gap over Hamilton. Ferrari tells Leclerc that Vettel will let him through the next lap.

Leclerc tells the team that he respected his part of the deal, and Vettel should let him through.

Ferrari tells Leclerc that Hamilton is too close and that they will do the swap later in the race.

Hulkenberg has a slow stop for medium tyres, and rejoins in 17th.

Albon is battling with Gasly over 11th place. Albon tells the team that he is having braking problems.

Hamilton tells the team that he is still pushing.

Norris pits, then Sainz pits the next lap, both for medium tyres.

On lap 22 Leclerc pits for medium tyres and rejoins in fourth.

On lap 23 Perez pits for medium tyres and rejoins in 13th.

Vettel tells Ferrari that his rear tyres are getting worn out.

Ricciardo retires in the pits with damage from his first lap contact.

On lap 26 Vettel pits from the lead for medium tyres, and rejoins in fourth behind his team mate Leclerc. Hamilton takes over the lead ahead of Bottas and Leclerc.

On lap 27 Vettel pulls off the track with an MGU-H problem, the virtual safety car is out.

Vettel says "Are you serious?"

Russell has a failure with his car and ends up in the barrier - the full safety car is deployed.

On lap 30 Leclerc pits for a set of soft tyres.

At lap 32 the race resumes with Hamilton in front with Leclerc close behind Bottas in second.

Verstappen locks up in the first corner, but continues.

Leclerc looks for a way past Bottas, but he is not close enough.

Leclerc has droped back a bit to cool his tyres, and is making another charge at Bottas.

Magnussen is handed a 5-second penalty for going wide off the track.

At the finish Hamilton crosses the line with the win over Bottas and Leclerc.