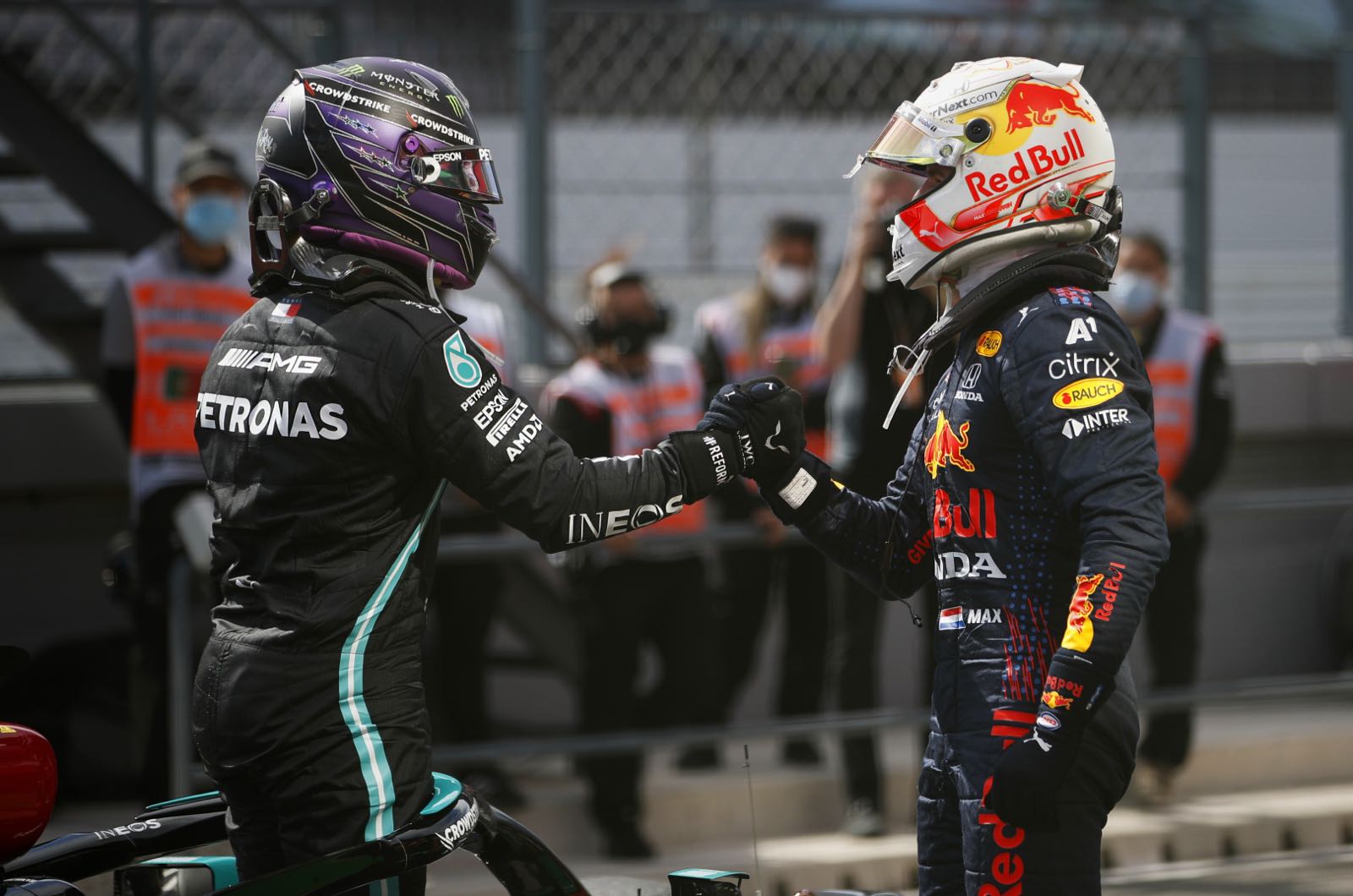 Lewis Hamilton won the Portuguese in his Mercedes GP, Max Verstappen in the Red Bull-Honda was second, 29.148 seconds behind, Valtteri Bottas in the second Mercedes was third, 33.530 seconds behind the winner.

The win in Hamilton’s second of the season, and his 97th career win. Hamilton now leads the World Championship by 8 points over Verstappen.

Sergio Perez (39.735s) in the second Red Bull, after a slow first few laps, made his way back up to fourth place, followed by Lando Norris (51.369s), in the McLaren-Mercedes finished fifth, Charles Leclerc (55.781s), in the Ferrari was sixth, Esteban Ocon (1m03.749s) in the Alpine-Renault was seventh, his team mate Fernando Alonso (1m04.808s) was eighth, Daniel Ricciardo (1m15.369s) in the second McLaren was ninth and Pierre Gasly (1m16.463s) in the AlphaTauri-Honda took the final point in tenth place.

Before the start of the third round of the world championship on a sunny day, Bottas is on pole, with Hamilton alongside on the front row, Verstappen and Perez on row two, Sainz and Ocon on row three, Norris and Leclerc on row four and Gasly and Vettel rounding out the top ten.

At the appointed time, the grid came round, the lights went out and the race began with Bottas takes the lead over Verstappen and Sainz. Ocon overtakes Norris, but Norris gets back sixth place later in the lap.

On lap 2 Kimi Raikkonen makes contact with his team mate and his front wing is broken - he goes off into the gravel trap at turn one, and the safety car comes out.

The field comes through the pitlane to avoid any debris.

Bottas reports to his team that his rear brakes are very hot.

Hamiton runs half a second behind his team mate Bottas.

Yuki Tsunoda is warned that he has been exceeding track limits.

On lap 20 Hamilton makes a run at Bottas with DRS, and passes on the outside of the first corner to take the lead.

Bottas start falling back into the clutches of Verstappen.

On lap 22 Sainz pits from sixth and takes on medium tyres, and rejoins in 15th place.

The next lap Norris, Ocon, Vettel and Giovinazzi all pit.

Norris and Sainz battling for tenth.

Hamilton tells the team, “there is definaty a lot of wear.”

On lap 26 Leclerc pits from fifth for hard tyres and rejoins in tenth.

Verstappen complains to the team that he is not able to use third gear.

On lap 36 Verstappen pits from third and changes to hard tyres and rejoins in fourth behind Perez.

The next lap Bottas pits from second for hard tyres as well and stays ahead of Verstappen. Into turn 5 Verstappen comes up the inside and takes third place.

The next lap Hamilton pits for hard tyres and rejoins in second ahead of Verstappen. Perez, yet to pit, takes over the lead.

On lap 40 Alonso pits from sixth for hard tyres and rejons in 11th.

Ricciardo pits for hard tyres and rejoins in tenth.

Toto Wolff urges Bottas that he is the quickest on track now.

Bottas is closing on Verstappen and trails him for third by 1.7 seconds.

Mazepin holds up Perez in lapping him, he leads by 3.9 seconds.

On lapp 51 Hamilton passes Perez for the lead.

Perez pits for soft tyres and rejoins in fourth, looking for a fast lap before the finish.

Bottas has a slow lap, and the team tells him he had a power unit sensor warning.

Alonso on hard tyres is closing on Sainz on medium tyres.

Bottas tells the team that he feels slow on the straights.

Ricciardo is closing on Sainz in ninth place.

On lap 64 Bottas pits for soft tyres to make a go at fast lap.

On lap 65 Verstappen pits for soft tyres as well.

Hamilton wins the race, followed by Verstappen and Bottas.

On the final lap Verstappen takes fast lap at 1m19.849s, but it is then deleted for exceeding track limits - the fastest lap goes to Bottas.

The circus will be back next week for the Spanish Grand Prix in Barcelona.