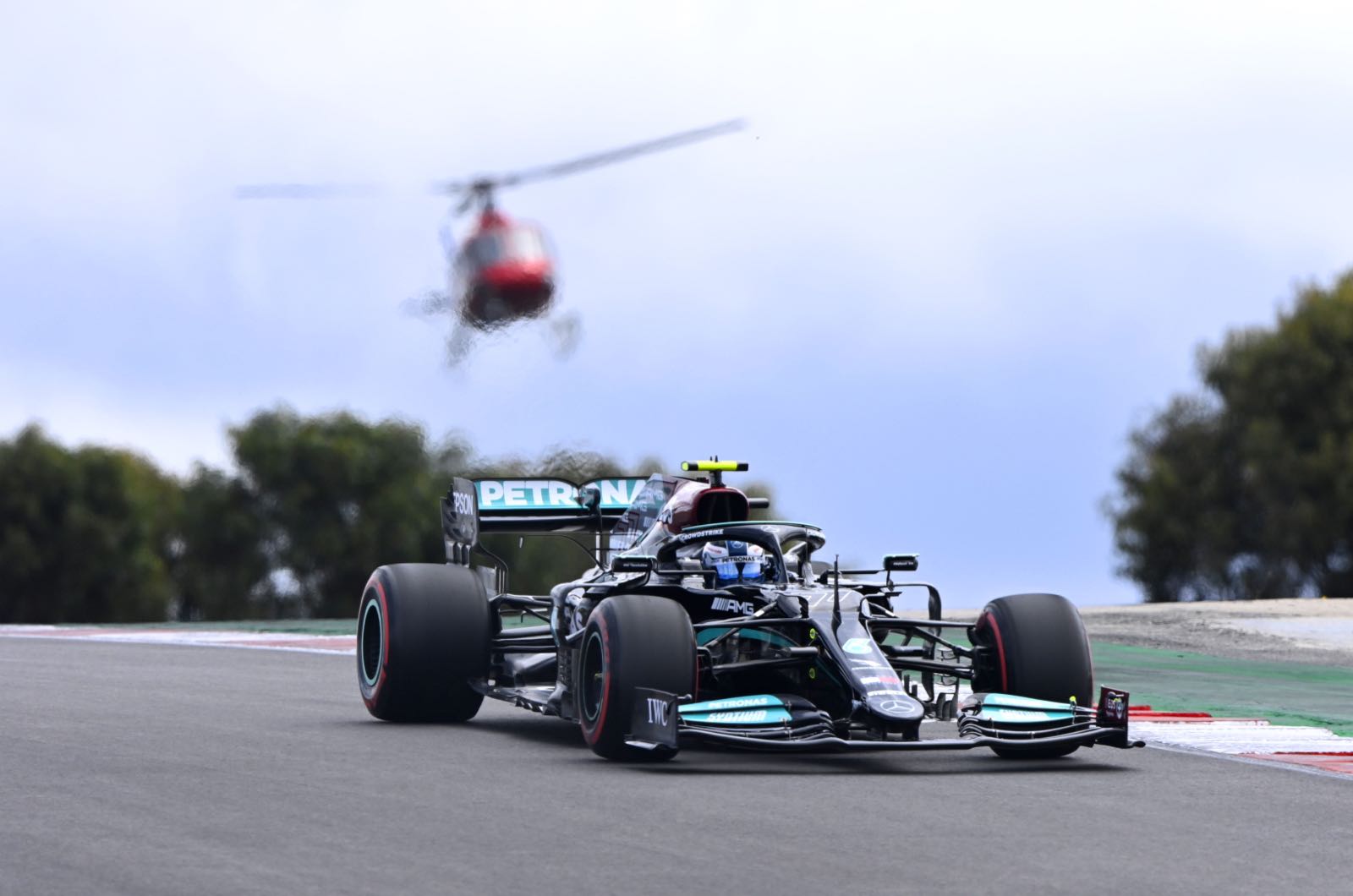 Lewis Hamilton could have earned the 100th pole position of his F1 career in qualifying for the Portuguese Grand Prix, but his Mercedes teammate Valtteri Bottas denied him that honor by taking the front spot.

"It is a good feeling to be on pole," Bottas said. "It puts me in a good position for tomorrow."

First out in the 18 minute session were the Haas drivers. Mazepin clocked the first time – a 1:27.493 – so he briefly topped the charts before Norris took over.

Sainz was the first of the top team drivers was Sainz who turned a 1:19.480. The session was half over when Hamilton ran out front with his time of 1:18.726. But that time was deleted because he exceeded track limits at Turn 1. Bottas, meanwhile, took over with a 1:19.205.

Hamilton stayed out for another lap and got fifth place. Perez, in third, had a spin at Turn 4.

When there were six minutes remaining in Q1, Raikkonen was 15th and on the cutoff line. Vettel was 14th and Tsunoda was 16th.

With five minutes to go 17 of the 20 drivers were on track. Norris jumped into the lead. Hamilton grabbed second, but then Bottas beat them both.

The five drivers who were eliminated at the end of Q1 were: Ricciardo, Stroll, Latifi, Schumacher and Mazepin

Sainz and Giovinazzi got things rolling in Q2.

Most of the drivers were out on the medium compound Pirelli tires. But Norris was on the softs as were Gasly and Tsunoda.

Tenth and on the bubble with five minutes to go was Alonso, who had switched to the soft tires, and Gasly was ninth while Russell was 11th.

Those drivers in jeopardy switched to the soft slicks for their final runs in Q2.

The five drivers who were eliminated at the end of Q2 were: Russell, Giovinazzi, Alonso, Tsunoda and Raikkonen.

The fastest 10 drivers who moved on to Q3 were: Hamilton, Bottas, Norris, Ocon, Verstappen, Leclerc, Sainz, Perez, Vettel and Gasly.

Q3 lasted 12 minutes, and first out for those minutes was Gasly. Vettel was the last of the 10 out.

Bottas went ahead at 1:18.348, which was 0.007 faster than Hamilton. Verstappen had his time deleted for exceeding track limits at Turn 4.

Perez was third ahead of Sainz, Norris, Leclerc, Gasly, Ocon, Vettel and Verstappen.

There was a lull in the action as the drivers prepared for their final runs.

Bottas and Hamilton headed back out on the medium Pirellis. The others stuck with the softs.

Neither Mercedes driver improved, so Bottas remained on pole. Hamilton was second ahead of Verstappen, Perez, Sainz, Ocon, Norris, Leclerc, Gasly and Vettel.