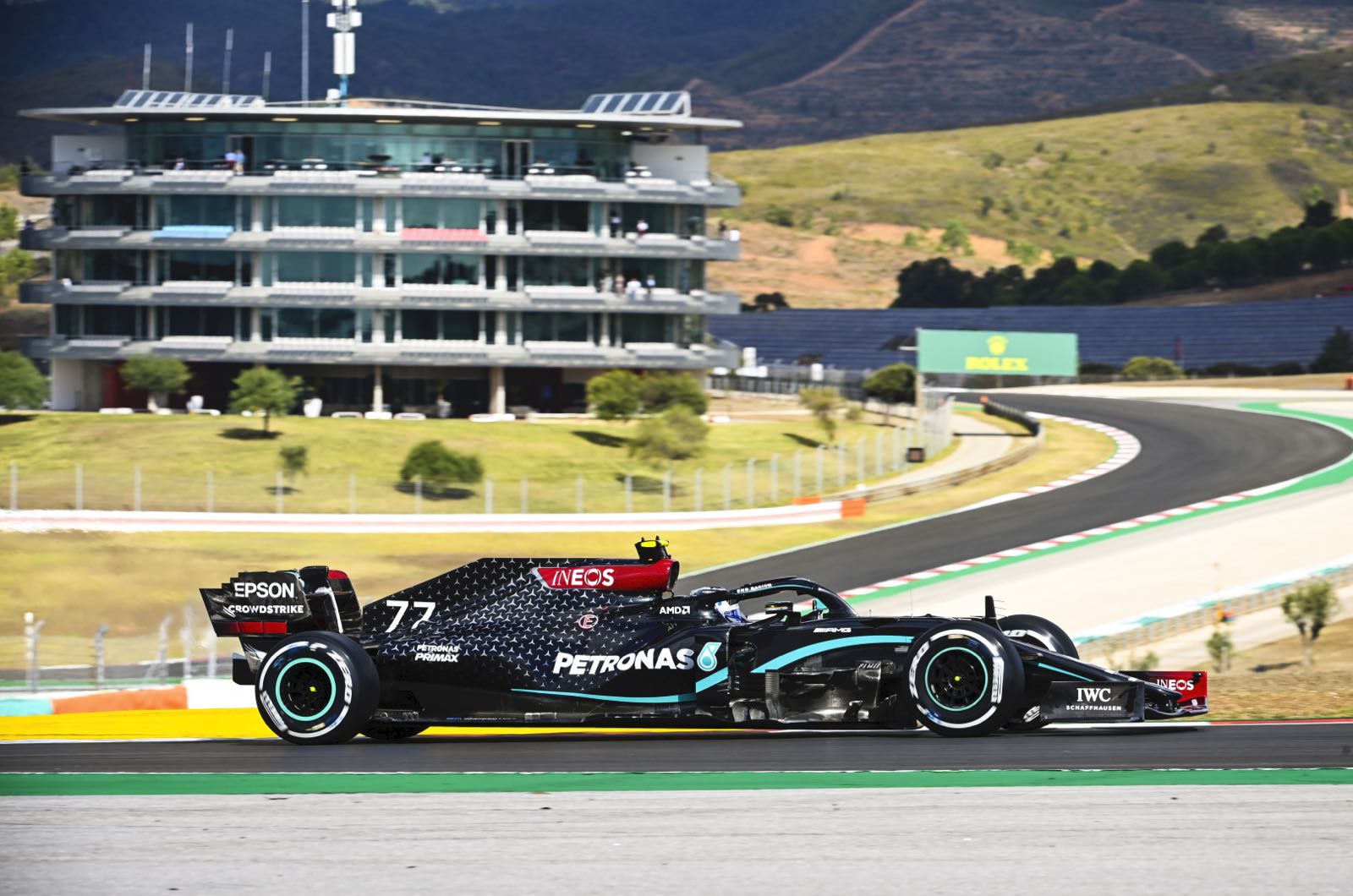 Valtteri Bottas clocked the fastest lap time in Free Practice 2 for the Portuguese Grand Prix during a session that was red flagged after Pierre Gasly’s AlphaTauri caught fire. The red flags came out again after Lance Stroll and Max Verstappen crashed in Turn 1.

The layout of the Algarve International Circuit, also known as Portimao, used for the weekend was 2.891-miles (4.653 km) and had 15 turns (nine right, six left).

“At one section of track you go up a hill almost blind where you feel like the car is going to take off,” Albon said, “and then it suddenly drops down a hill before rising again into a completely blind corner. You brake, turn in, and you don’t know where you’re going and then the corner just appears on your right, before dropping down massively again. It’s really impressive and it’ll be good because I think, as we saw in Mugello, new tracks are fun and make it interesting. They throw the dice a bit in terms of how teams are able to adapt to the circuit.”

The Alfa Romeo drivers were the first out in FP2.

All the drivers tried out Pirelli 2021 prototype hard compound tire in the first 30 minutes of the session.

Mario Isola, the Head of F1 and Car Racing at Pirelli, said: “As usual this will be a ‘blind’ test, so the drivers won’t know exactly what they are sampling."

Sainz had an early spin while Hamilton took an early lead with a time of 1:22.147. Then Bottas sliced 0.123 of a second off of that time.

Traffic was heavy because all 20 drivers were usually on track doing the tire testing.

Just before the half-hour mark Verstappen took the lead with a 1:21.575.

At the end of the “prototype” 30 minute session the top ten were: Verstappen, Bottas, Leclerc, Perez, Norris, Hamilton, Sainz, Ricciardo, Gasly and Ocon.

Many of the drivers complained about the lack of grip on the newly resurfaced track.

At the 40 minute mark Hamilton headed out on the soft compound Pirelli tires while Vettel had a spin and headed to the pits. Kvyat also had a spin. But it was Bottas on the softs who went ahead with his 1:17.940.

Halfway through FP2 Gasly’s car caught fire and he stopped on track. The marshals extinguished the blaze and the session was red flagged. The order was: Bottas, Verstappen, Leclerc, Vettel, Gasly, Russell, Albon, Norris, Ocon and Sainz.

The restart came with 29 minutes remaining. Bottas, on the soft tires, was the first out. Hamilton was next. A number of drivers, all on the softs, followed them on track.

Verstappen and Stroll tangled in Turn 1 and brought out the red flags with 25 minutes remaining because Stroll’s car was now parked in a gravel trap.

Just eight minutes remained when the green lights came on. Everybody except Stroll and Gasly headed out.

After the final flurry of laps the order at the end of the twice interrupted FP2 was: Bottas, Verstappen, Norris, Leclerc, Sainz, Vettel, Gasly, Hamilton, Ocon and Albon.