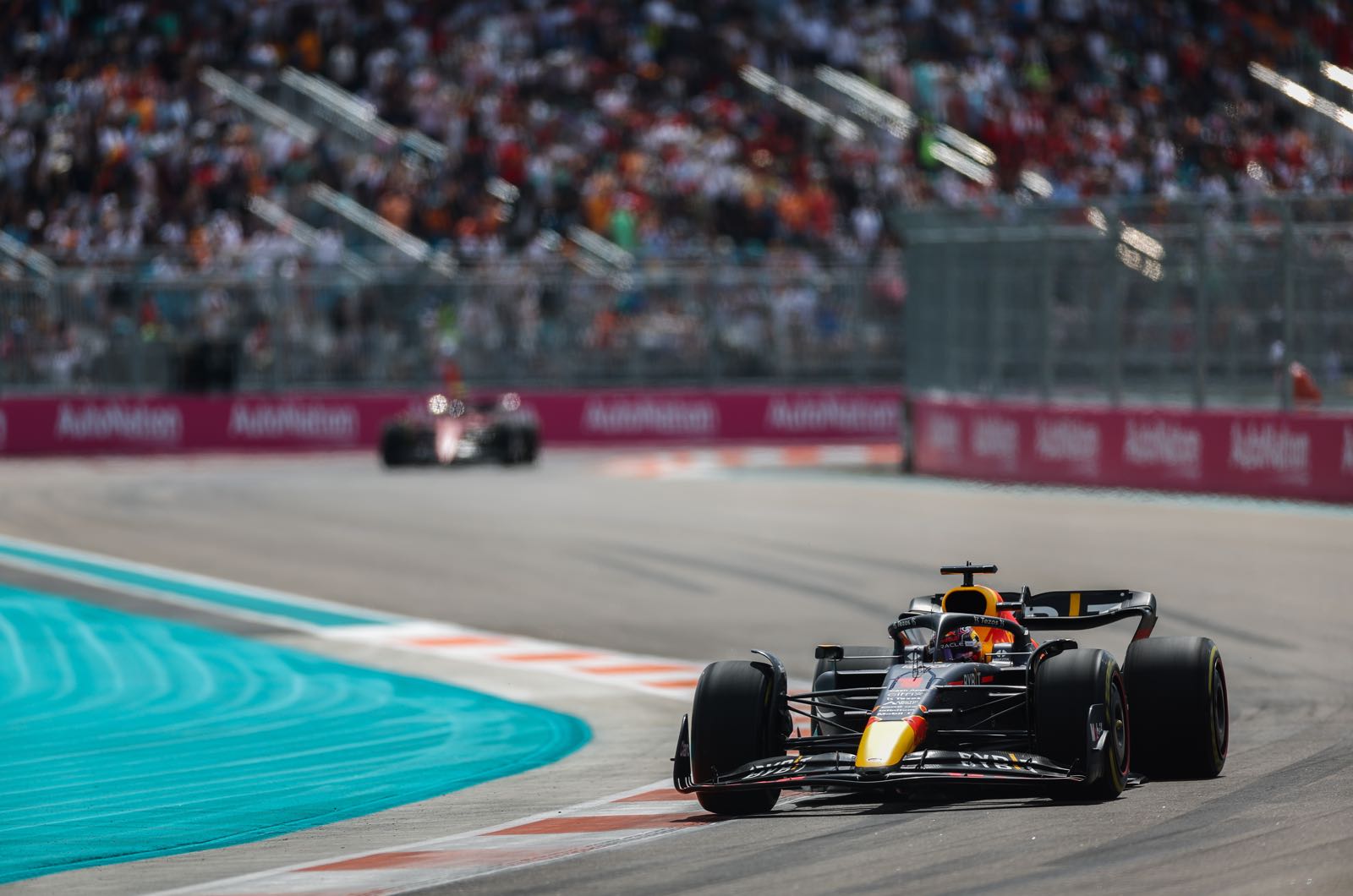 Max Verstappen won the first ever Miami Grand Prix in his Red Bull, 3.786 seconds ahead of pole sitter Charles Leclerc in his Ferrari. Carlos Sainz in the second Ferrari was third, 8.229 seconds behind the winner.

The win is Verstappen’s third of the season, and 23rd career win.

Before the start, with a chance of showers (40%) on a hot afternoon, the two Ferarri’s of Leclerc on pole and Sainz on the outside of row 1, Verstappen and Perez on row 2, Bottas and Hamilton on row 3, Gasly and Norris on row 4 and Tsunoda and Stroll rounding out the top ten.

Vettel and Stroll will start from the pitlane due to fuel temperature issues.

Tons of celebrities have turned out for the event.

At the appointed time the field came around the Miami circuit for it’s first race. The lights went out and the race began with Leclerc takes the lead, Verstappen passes Sainz for second into the first corner.

Alonso touched tyres with Hamilton in the first corner, and Hamilton reporting a potential problem.

Alonso is chasing Gasly for seventh.

On lap 9 Verstappen passes Leclerc for the lead in the DRS zone.

Gasly and Albon pit, both for hard tyres.

On lap 19 Norris pits for hard tyres, and gets past by Stroll, Vettel and Magnussen passing him as he rejoins the race.

Perez reports to the team that he is losing power.

Norris runs wide at a corner and Schumacher passes him for 15th.

Magnussen is chasing Vettel for 13th.

On lap 23 Hamilton pits from sixth for hard tyres and rejoins seventh.

On lap 25 Leclerc pits from second place for hard tyres and rejoins in fourth.

Latifi is chasing Tsunoda for 18th.

On lap 27 Verstappen pits from the lead for hard tyres and rejoins in second, Sainz takes over the lead.

On lap 28 Sainz and Perez both pit, both for hard tyres - Sainz has a slow stop, but still gets our ahead of Perez.

Hamilton is struggling with his tyres and has a lockup, but continues.

On lap 35 Magnussen runs wide and Schumacher passes him for 12th. Norris passes Vettel for 14th.

So teams are reporting to their drivers that there is some rain coming in the next 10 minutes.

Bottas has closes to under two seconds behind Russell, on his original hard tyres.

On lap 40 Norris and Gasly make contact, and the virtual safety car is out.

Russell pits. The full safety car is out. Perez and Ocon pit the next lap. Vettel, Ricciardo and Tsunonda all pit.

Alonso is given a 5-second penalty for his earlier contact.

At the end of lap 46 the safety car pulls in, and the race resumes with Verstappen in the lead followed by Leclerc, Sainz and Perez looking to get by on fresh tyres.

Leclerc is within a second of Verstappen in the lead.

Bottas runs wide e and and Hamilton and Russell pass him.

Russell then passes Hamilton for fifth.

Leclerc is still within half a second of Verstappen in the lead.

Perez continues to challenge Sainz for third, the two touch, Perez locks up, Sainz retains the position, and both continue.

Hamilton is back up to fifth ahead of Russell

Vettel and Schumacher come together, Vettel is out, Schumacher pits for a new front wing.

On lap 56 Verstappen stretches his lead to 2.5 seconds.

On the final lap Verstappen takes the chequered flag ahead of Leclerc and Sainz to win the first Miami Grand Prix.