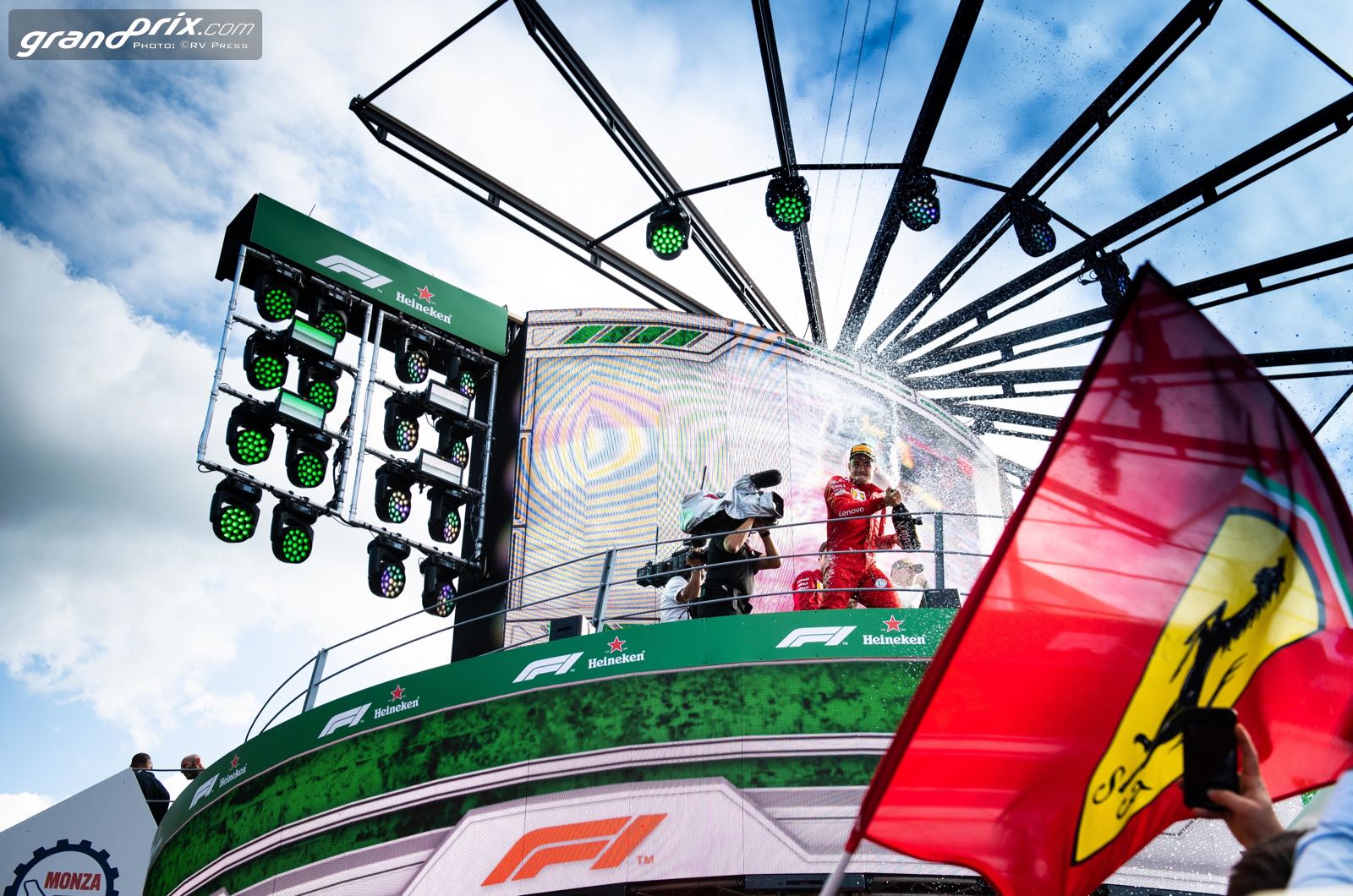 Ferrari's Charles Leclerc withstood challenges from Mercedes drivers Lewis Hamilton and Valtteri Bottas and went on to win the Italian Grand Prix much to the delight of the thousands of tifosi who cheered him on to victory at Monza. It was his second win in eight days. Here is how it unfolded.

THE FARCE IF NINE

Nine drivers drove around slowly and jockeyed for position in the final two minutes of qualifying. They were all trying to get into position to get the slipstream off the car in front while not being the car in front. The result was that all of them except Carlos Sainz failed to make it to the start/finish line before the checkered flag, and therefore they could not do their final fast laps.

Leclerc's Leclerc called that last lap farce "a mess" but he didn't really mind as his previous fast lap put him on pole for the fourth time this season.

Hamilton and Bottas were in the second and third grid spots.

Leclerc rocketed into the lead at the start of the 53-lap race. Hamilton was second and Bottas third. Only these three would be in contention for the win.

Vettel made sure he was not on contention by spinning on lap 6, running into Lance Stroll's car, pitting for a new wing, and getting a 10-second stop and go penalty for an unsafe return to the track. He finished 13th.

Hamilton kept close to Leclerc, about a second back, until the first pit stops.

Hamilton was the first to pit, coming in after 19 laps to switch from Pirelli's soft compound to the medium compound slicks.

Leclerc pitted a lap later, changing the softs for the hards.

Bottas led from laps 20 to 27 before pitting for the mediums. So he had fresher tires than the other two.

Meanwhile, on lap 23, Hamilton tried to pass Leclerc who would not budge. Hamilton was forced to bounce across the runoff area at the chicane.

"I knew he was on the right," Leclerc said. "He braked a little bit early which I think was probably on purpose because he didn't' want to try around the outside. I thought I had left a car width. I haven't seen the images to be honest. But I was pretty sure there was a car width."

Leclerc got a black and white warning flag for his robust defense.

Hamilton continued to put pressure on Leclerc, and the latter had to cut across the first chicane on lap 36. But Leclerc managed to keep his lead.

Hamilton made a mistake at the same chicane on lap 42, and that allowed Bottas to take second place.

Twice Bottas closed in on Leclerc, and twice Bottas made small mistakes and dropped back.

"I'm gutted," Bottas said. "I was trying everything I could to get him and there was no way past. Always when I was getting close enough, I started left-front locking, because of the lack of downforce and they are so quick in the straights as well. But I tried and I think it was the best I could do today."

"I did the best I could," Hamilton said after finishing third. "Obviously following so closely for such a long time the tires eventually just went off the cliff. Nonetheless, they were just quicker today - much quicker in a straight line, so even if we did get close, we couldn't pass. Not our day but still strong points for the team."

"It felt amazing," he said. "I've never been on a podium with so many people underneath it. And to see that the whole straight was full of people - mostly red - 99 percent red - was great to see. Hearing them cheering, singing was just…a lot of emotions."

It had been nine years since Ferrari's last victory at Monza - Fernando Alonso in 2010.