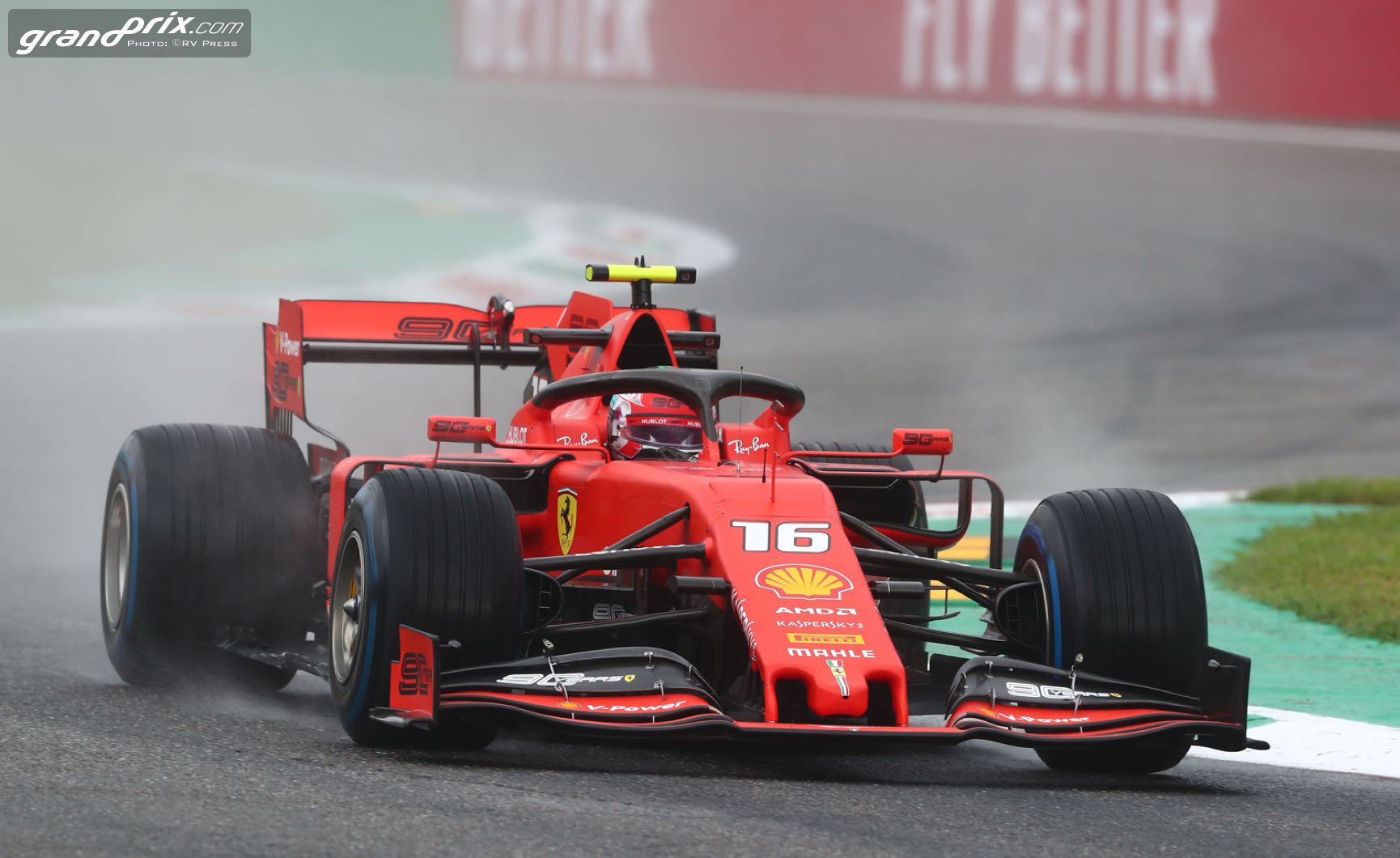 The rain that fell before the start of Free Practice 1 for the Italian Grand Prix left the track slick for most of the session. Drivers spun and crashed, and the session was red flagged no less than three times. In the final minutes the track dried enough for the drivers to go out on slick tires, and Charles Leclerc gave the Ferrari fans something to cheer about by posting the fastest lap.

"It is unique," Vettel said of the 3.599-mile (5.793 km) 11-turn Autodromo Nazionale di Monza. "You are racing with low downforce; you have got a lot of long straights and therefore it is difficult. The car is quite light and is moving around, with little wings on the car it is difficult to find the right braking spots. There are tight and narrow chicanes, it is tricky to find the right amount of curbing.

"It is not an easy one to set the car up for but if you do, and you get the car in the right place, it can make you really happy when you find the rhythm."

Grosjean was the first out onto the Autodromo.

It had rained earlier in the morning, and although it had stopped prior to FP1, the track was still very wet. Which Vettel discovered when he slid straight on at the first chicane.

Most drivers did a lap or two on Pirelli's full wet weather tires, and Norris was the only one to do any flying laps in the first 18 minutes. He posted a time of 1:36.544.

As the half hour mark approached, more drivers began circulating, including Kvyat who took the lead with a lap of 1:35.814.

Then, 26 minutes into FP1, the red flags came out after Raikkonen got stuck after spinning off at Turn 11, tagging the barrier, and getting stuck in the gravel trap.

Norris had also had a spin but was able to continue back to the pits.

The track reopened 33 minutes into the session. Verstappen slid off at Turn 2. Two minutes later the red flags came out again, this time after Perez spun and crashed at Turn 11.

The track reopened 43 minutes into the session. By now the track was dry enough for the drivers to switch to Pirelli's intermediate rain tires.

The lap times fell accordingly. Verstappen got down to a 1:33.800. Next, Gasly spun at the first chicane and caused red flag number three 49 minutes into the session.

Giovinazzi had a spin at the first chicane and got going again.

Neither Hamilton nor Bottas had posted a time with 25 minutes to go in FP1. When Hamilton finally got going, he popped up to second place with a lap of 1:31.884. But, like many other drivers, he went sliding off across the first chicane as well.

The order was now Hamilton, Bottas, Albon, Leclerc, Sainz, Kvyat, Norris and Gasly with 15 minutes to go. But not for long as Bottas did a 1:30.596 to move ahead of his teammate.

All the drivers were in the pits with 10 minutes remaining. Would the track be dry enough to warrant using slick tires in the final minutes?

The Ferrari drivers were the first to try the slicks, both of them on the medium compound Pirellis. Other drivers had the soft compound slicks fitted to their cars.

The top 10 at the end of FP1 were: Leclerc, Sainz, Norris, Hamilton, Albon, Kvyat, Verstappen, Vettel, Bottas and Gasly.