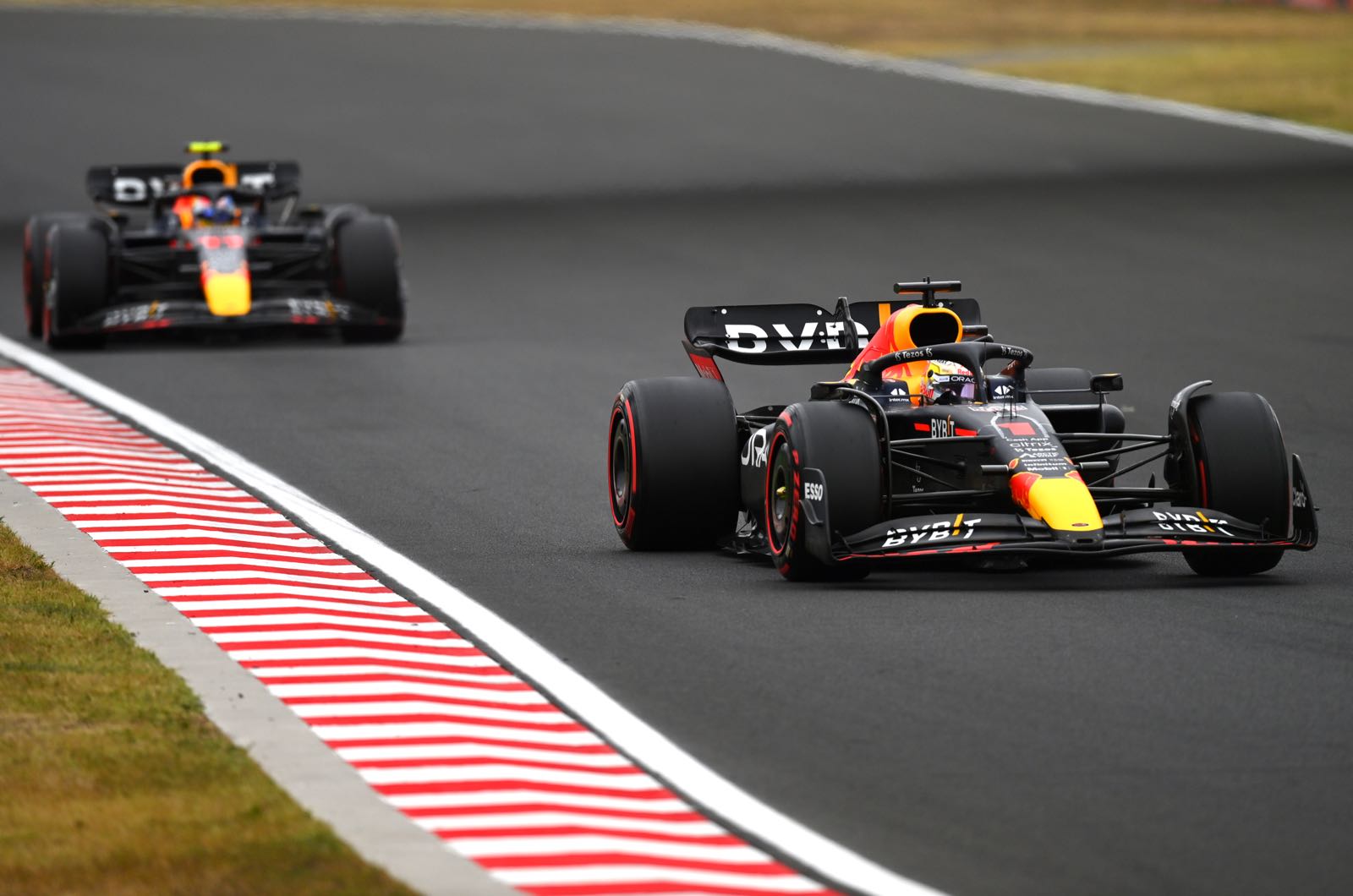 Max Verstappen won the Hungarian Grand Prix in his Red Bull, Lewis Hamilton in the Mercedes GP was secon, 7.834 seconds behind. Polesitter George Russell in the second Mercedes was third, 12.337 seconds behind the winner.

The win is Verstappen’s eighth of the season, and he extends his lead in the Drivers’ Championship.

Carlos Sainz (14.579s) in the Ferrari was fourth, followed by Sergio Perez (15.688s) in the second Red Bull was fifth, Charles Leclerc (16.047s) in the second Ferrari was sixth, Lando Norris (1m18.300s) in the McLaren-Mercedes was seventh, Fernando Alonso (1 lap) in the Alpine-Renault was eighth, his team mate Esteban Ocon in the second Alpine was ninth, and Sebastian Vettel in Aston Martin-Mercedes took the final point in tenth place.

Before the start Russell is sitting on his first pole position, with Sainz in the Ferrari alongside, Leclerc and Norris are on row 2, Ocon and Alonso make up row 3, Hamilton and Bottas on row 4, and Ricciardo and Verstappen round out the top ten.

The teams are expecting rain to hit just after the start.

Russell, Norris, Ricciardo and Vertappen starting on soft tyres, the rest of the top ten on medium tyres.

There are signs of spots of rain. Gasly starting from the pitlane.

At the appointed time the field came around on the formation lap to line up on the grid, the lights went out and the race began with Russell in the lead ahead of Sainz, Leclerc, Norris, Hamilton, Ocon, Alonso, Verstappen, Perez and Magnussen.

Magnussen has damage to his front wing. The virtual safety car is out for debris on the track.

On lap 3 the virtual safety car is over, and Russell jumps out to a 2.6 second lead over the two Ferrari’s of Sainz and Leclerc.

Perez reports that he hears a sound from his engine.

Mercedes reports to Russell that rain might come in half an hour.

On lap 9 Perez passes Ocon for seventh place at the first corner.

Cars on soft tyres are starting to struggle with their front tyres.

On lap 12 Hamilton passes Norris for fourth place. Verstappen quickly gets past Norris as well for fifth.

Verstappen reports to Red Bull that his clutch is slipping.

On lap 15 Norris pits and changes to medium tyres and rejoins in 16th.

On lap 16 Vettel and Ricciardo pit.

On lap 17 Russell pits from the lead changing to medium tyres, and battles with Ocon coming back onto the track. Ocon gets ahead in fifth.

Vertappen pits as well changing to medium tyres and rejoins in eighth.

On lap 18 Sainz pits from the lead for medium tyres and rejoins sixth.

On lap 19 Perez pits for medium tyres and rejoins

On lap 20 Hamilton pits from second place for another set of medium tyres and rejoins in seventh.

On lap 22 Leclerc pits for medium tyres and rejoins second.

Pm lap 24 Ocon pits, rejoins just ahead of Alonso. Alonso tries to get past Ocon, but Ricciardo passes both Alpines for tenth place.

On lap 27 Leclerc takes a look at passing Russell in the lead but stays behind.

On lap 28 Leclerc gets side-by-side with Russell, but still can’t get the position.

On lap 30 Russell and Leclerc continue to battle.

On lap 31 Leclerc passes Russell on the outside of turn 1 and takes the lead.

Sainz closes on Russell in second.

On lap 34 Stroll reports that he is seeing spots of rain.

On lap 35 Tsunoda spins in the chicane, and rejoins.

Drops of rain are visible at turn 2.

On lap 39 Verstappen pits from fourth and takes another set of medium tyres and rejoins in sixth.

On lap 42 Verstappen spins just before the final corner, and rejoins - Leclerc passes him for third.

Om ;a[ 47 Ricciardo. Stroll, Vettel and Gasly all pit.

On lap 48 leader Sainz has a slow stop for soft tyres and rejoins in fifth.

Hamilton, yet to pit, leads ahead of Verstappen and Leclerc.

Ricciardo is handed a 5-second penalty for his contact with Stroll.

Russell is close on the tail of Leclerc in third.

On lap 52 Hamilton pits for soft tyres and rejoins in fifth.

On lap 54 Russell passes Leclerc into the first turn for second place.

On lap 55 Leclerc pits for soft tyres and rejoins in sixth.

On lap 60 Hamilton closes to 1.1 seconds behind Sainz.

On lap 63 Hamilton passes Sainz in DRS to take third. Hamilton is 1.1 second behind Russell.

On lap 68 Bottas pulls off the track with a power issue.

The virtual safety car is out.

On lap 69 the virtual safety car ends, the race is back on, but rain drops are falling.

Verstappen wins over Hamilton and Russell.