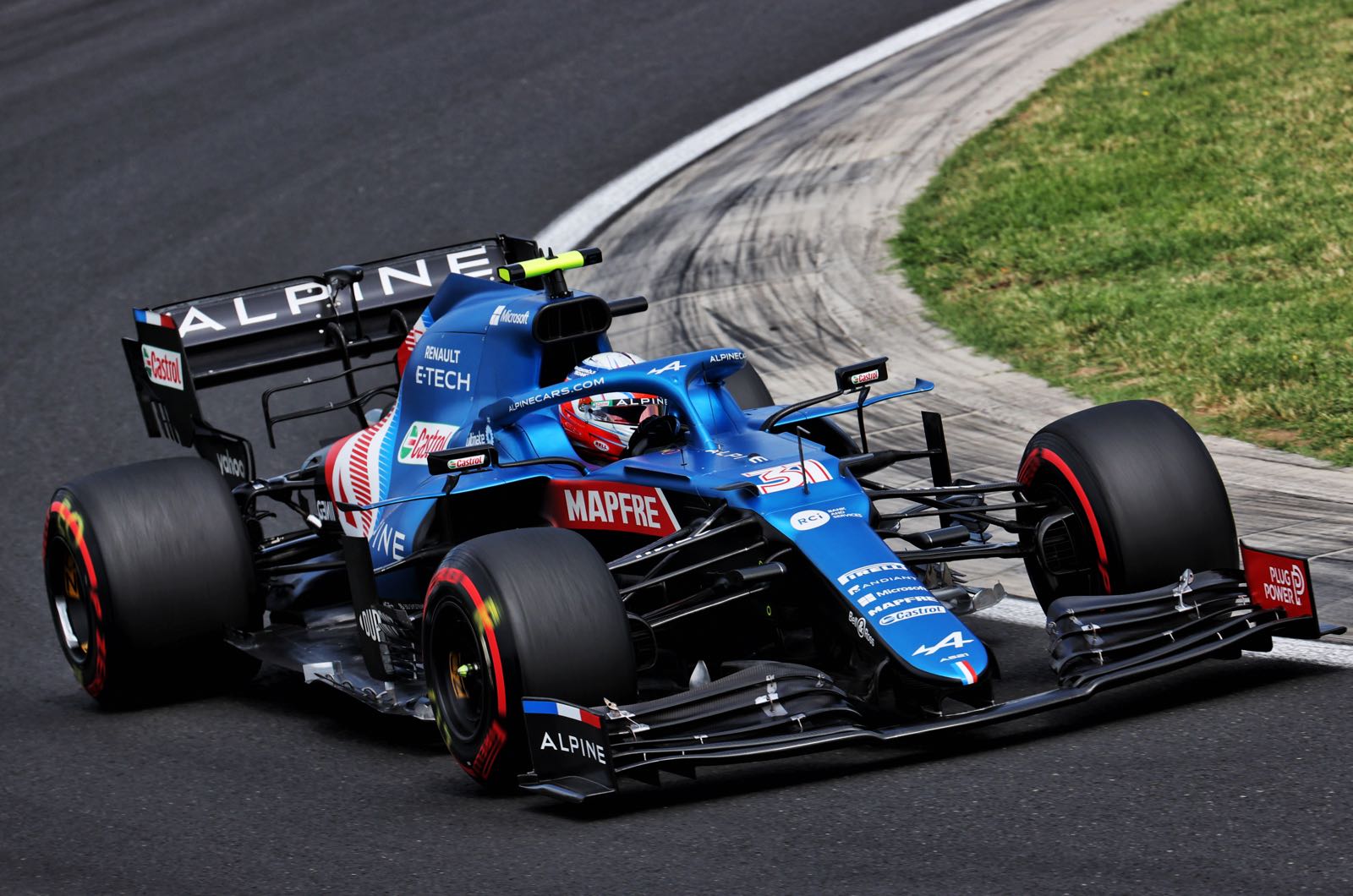 After a wild start, Esteban Ocon won the Hungarian Grand Prix in his Alpine-Renault, 1.859 seconds ahead of Sebastian Vettel in the Aston Martin-Mercedes. Lewis Hamilton in the Mercedes GP finished third, 2.736 seconds behind the winner.

It is Ocon’s second podium and first win in his 78th career Formula One race. His last win was in Formula 3 in 2015. Ocon is the 111th Grand Prix winner.

It is the first win for a French driver in a French car since Alain Prost in the 1983 French GP.

Hamilton overtook Verstappen in the Drivers’ Championship, leading by 6 points, Mercedes retakes the lead over Red Bull-Honda by 10 points.

Carlos Sainz (15.018s) in the Ferrari finished fourth, followed by Fernando Alonso (15.651s) in the second Alpine was fifth, Pierre Gasly (1m03.614s) in the AlphaTauri-Honda was sixth, his team mate Yuki Tsunoda (1m15.803s) was seventh, Nicholas Latifi (1m17.910s) in the Williams-Mercedes scored his first career points in eighth, his team mate George Russell (1m19.094s) was ninth, his first points score as well, and Max Verstappen (1m20.244s) in his damaged Red Bull-Honda took the final point in tenth.

Before the start the weather was dry, but there is rain expected before the start. Hamilton starts from pole alongside team mate Valtteri Bottas on the front row. Verstappen and Sergio Perez on row 2, Gasly and Lando Norris on row 3, Charles Leclerc and Ocon on row 4 and Alonso and Vettel rounding out the top ten.

With 20 minutes to go before the start, rain drops began to fall on the grid.

All drivers will start on intermediate wet tyres.

At the appointed time, with a wet surface on the track, the drivers came around to the grid, the lights went out, and the race started with Hamilton gets off in the lead, Verstappen in second, into the first corner Bottas hits the back of Norris, and then Norris slides into Verstappen, Bottas hits Perez, and others go off the track. Verstappen is able to keep going and then pits with damage to his Red Bull and continues. Lance Stroll hits Leclerc.

With debris on the track the race is red flagged.

Red Bull mechanics attack Verstappen’s car to fix as much as possible to his car.

McLaren will not restart Lando Norris, as his car has too much damage.

The officials announces that the race will restart at 34 minutes after the hour.

The rain has eased off, and the track is starting to dry out for the moment, with much of the track looking dry, many will stop for dry tyres after the start.

The drivers come around for another attempt at a standing start.

OnThe lights go out and Hamilton is the only one start.

Russell in second starts from

Hamilton pits for dry tyres and returns in 14th place.

Mazepin and Raikkonen made contact in the pits and Mazepin retires.

Giovinazzi is handed a 10-second penalty for speeding in the pits.

Raikkonen is handed a 10-second penalty for unsafe release.

On lap 16 Hamilton passes Schumacher for 11th. Raikkonen pits and serves his penalty.

Hamilton tells the team “I can’t get close to people."

Vettel continues to follow a second behind Ocon in the lead.

On lap 20 Hamilton pits for hard tyres and rejoins in 12th.

Tsunoda pits for medium tyres and rejoins in seventh.

On lap 23 Latifi pits from third for hard tyres and rejoins in seventh.

Hamilton is running 1m21s laps while those ahead of him are running 1m22s and 1m23s laps.

Alonso reports to the team that the sky is getting black.

On lap 31 Gasly pits for hard tyres and rejoins in eighth.

On lap 32 Hamilton passes Tsunoda for fifth. Sainz pits for hard tyres and rejoins in fourth ahead of Hamilton. Russell passes Schumacher for ninth.

On lap 37 Vettel pits from second place for hard tyres and rejoins in third place.

The next lap leader Ocon pits for hard tyres and rejoins in second place ahead of Vettel. Alonso takes over the lead.

Vettel is all over the back of Ocon, but Ocon keeps the position.

Hamilton tells the team that his tyres are going away.

On lap 39 Alonso pits from the lead for hard tyres and rejoins in fifth.

Hamilton tells the team that his "tyres got second wind.”

On lap 48 Hamilton pits from fourth for medium tyres and rejoins in fifth, 25 seconds behind the leader.

The team tells Hamilton “it is hammer time all the way” to the finish.

On lap 49 Hamilton sets fast lap at 1m18.715s, and is running 3 seconds faster than the leader, and trails the leader by 17 seconds.

Alonso trails Sainz by under a second.

Hamilton closes in on Alonso in fourth.

On lap 55 Alonso and Hamilton are battling, Alonso stays ahead.

On lap 57 Alonso and Hamilton continue to battle.

Hamilton tells the team that they need to give him more power.

The stewards announce that Valtteri Botttas will get a 5-grid penalty for the Belgium GP for his first lap incident.

Alonso and Hamilton continue to battle - Hamilton tells the team that Alonso moved over on him. Hamilton says “at that speed it’s dangerous”.

On lap 65 Alonso locks up into the first corner and Hamilton gets past for fourth place.

Hamilton with fresher tyres is all over Sainz in third place.

On lap 67 Hamilton passes Sainz for third place into the first corner.

At the line Ocon wins ahead of Vettel and Hamilton.