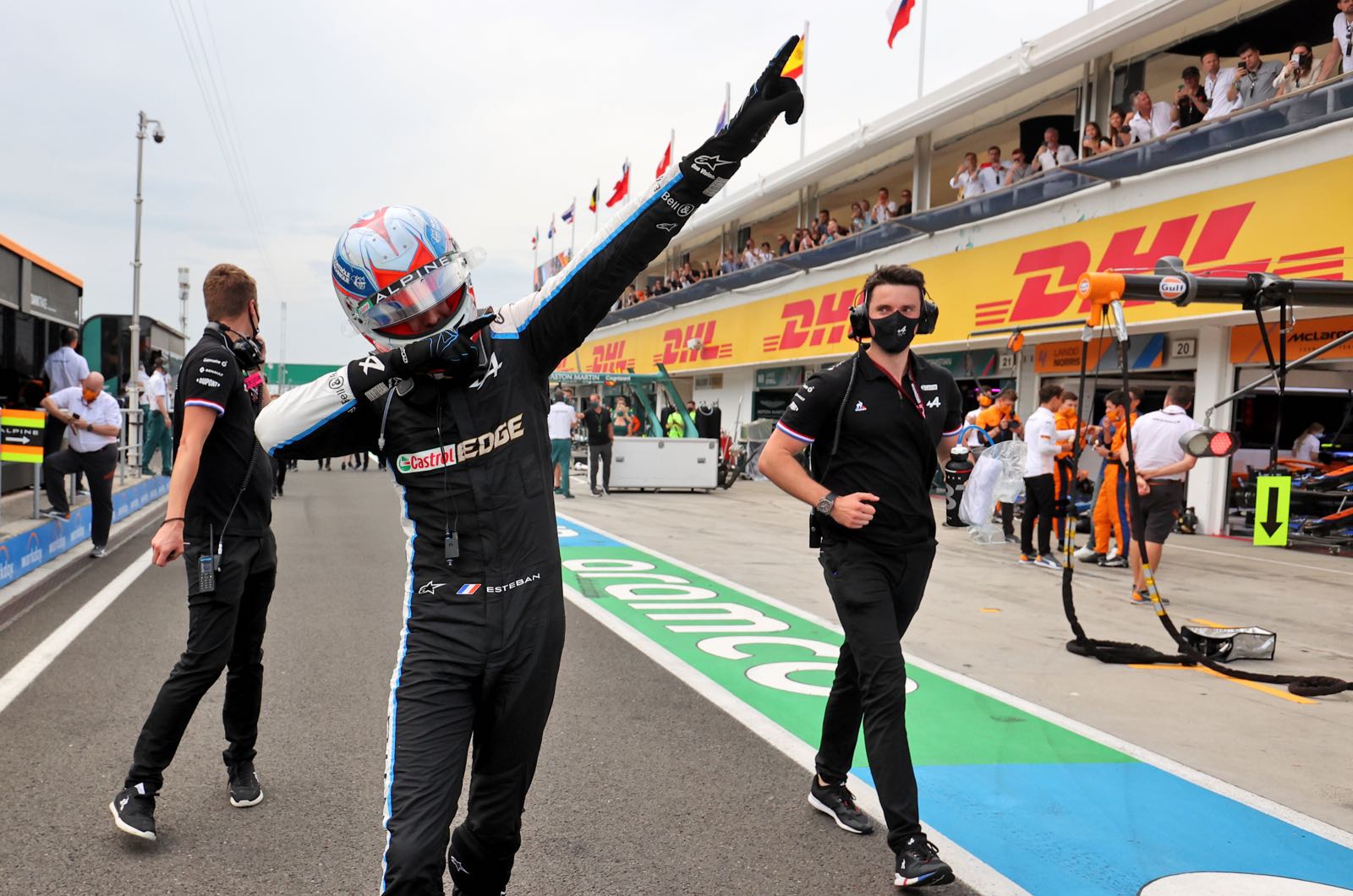 Esteban Ocon scored his first Formula 1 victory after a weird race in Hungary. This is how it happened.

A light rain started falling before the start of the 70-lap race.

All 20 cars were fitted with Pirelli's intermediate wet weather tires.

Hamilton took the lead at the start.

A multi-car crash broke out in Turn 1, triggered by Bottas and Lance Stroll (Aston Martin).

"I had a poor start with lots of wheelspin off the line, lost a couple of places and then into turn one, I was right on the gearbox of Lando and locked the wheels," Bottas said. "I misjudged the braking point - it's always difficult starting a race in those conditions, you're always 'guesstimating' grip levels and today I got it wrong."

Out of the race were: Bottas, Perez, Leclerc, Stroll and Norris. A number of other drivers had damaged cars.

The race was red flagged at the end of lap 2 so that the debris could be cleaned up.

During the 25 minute delay the sun came out and the track started to dry.

All 20 drivers were still on inters as they went around on the lap to the grid for the standing restart.

At the end of that lap 19 drivers pitted to switch to slicks. This led to the bizarre sight of Hamilton being the only driver on the grid for the restart.

"It's crazy to think we were the only ones on the grid at the start, but these things happen in an unpredictable race, and we will learn any lessons that need to be learnt," he said.

So Hamilton started first and then dropped to last when he pitted at the end of the lap to get slicks.

Ocon was now in the lead ahead of Sebastian Vettel (Aston Martin).

The leading pair ran in close formation for the rest of the race. Ocon made no mistakes, so Vettel never had a chance to pass him.

"I tried to take the lead for the entire 70 laps," Vettel said, "but it is so difficult to overtake here. I think we were quicker for most of the race, but there was not enough of a difference to make an overtake because it was very hard to follow in the dirty air. I tried to pressure Esteban (Ocon) into a mistake, but he did not make a single one."

Using a two-stop pit stop strategy, Hamilton was able to work his way up to third place.

"Formula 1 Grand Prix winner, it's unbelievable and it definitely has not sunk in yet," Ocon said. "What a moment. It was a crazy race from the very start to the end. There were a lot of decisions to make and the team executed that really well along with the crew who did a mega pit-stop, which was crucial to staying in front of Sebastian. I was happy to manage the pace as best as possible at the front and it all worked out well today.

Vettel was later disqualified because his car did not have the mandatory one liter of fuel remaining in the car.