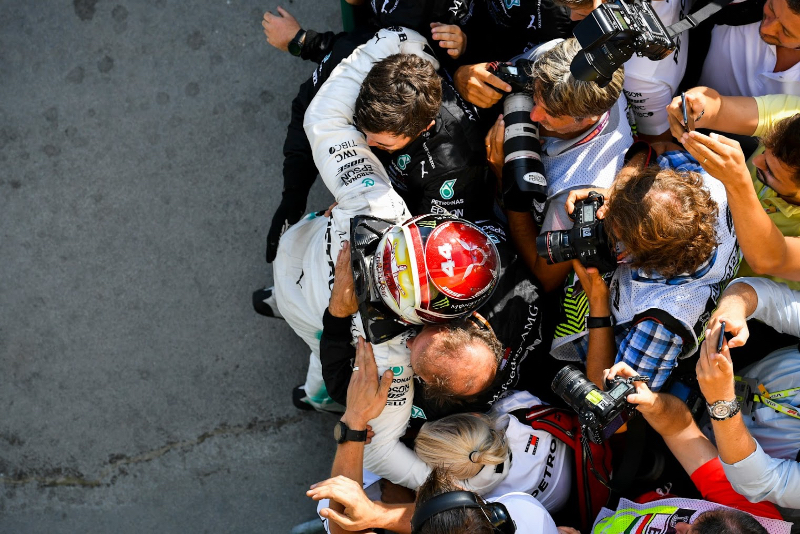 Lewsi Hamilton in his Mercedes GP had a tremendous come-from-behind run to beat Max Verstappen to win his seventh career Hungarian win.

Verstappen finsihed in second place in his Red Bull-Honda by 17.796 seconds, followed by Sebastian Vetel in his Ferrari in third,1m01.433 seconds behind the winner.

The win is Hamilton’s eighth of the 12 rounds of the 2019 season and his 81st career victory.

Charles Leclerc (1m05.250s) in the second Ferrari was fourth. followed by Carlos Sainz (1 lap) in his McLaren-Renault in fifth, Pierre Gasly in the second Red Bull in sixth, Kimi Raikkonen in the Alfa Romeo-Ferrari in seventh, Valtteri Bottas in the Mercedes in eighth, Lando Norris in the second McLaren in ninth and Alex Albon in the Toro Rosso-Honda in tenth place.

At the start Verstappen takes the lead from pole. At turn 3 Hamilton passes Bottas for second place, Botttas’ front wing is damaged with contact with Leclerc. Further through the lap Vettel and Leclerc both pass Bottas.

At the end of lap 5 Bottas pits to change his front wing and he switches to hard tyres and comes out last.

Bottas is in 20th, 48 seconds behind the leader.

Ferrari tells Vettel that they are on plan ‘B’.

On lap 14 Bottas is up to 18th place running the hard tyres.

Hulkenberg tells Renault that he is suffering power issues.

Bottas passes Stroll and Russell and is up to 16th place.

On lap 22 Kvyat pits from tenth and rejoins 16th.

Verstappen tells the team he is losing a lot of grip.

Hamilton has closed to under a second behind.

Hamilton tells the team that his tyres feel good, and that he can keep running for a while.

On lap 25 Verstappen pits fron the lead for hard tyres, and rejoins in second place ahead of the Ferraris.

Hamilton says he locked up under braking.

Norris pits for hard tyres and rejoins in 11th.

On lap 32 Hamilton pits from the lead, and rejoins in second place.

Hamilton followe\s the leader by under one second.

On lap 39 Ricciardo is in front of Verstappen. Hamilton batlles side-by-side, but runs wide and Verstappen stays in the lead. Hamilton backs off to cool his car and clean his tyres and runs 1.7 seconds behind. Hamilton asks the team, “what can I do?”

On lap 40 Vettel pits for soft tyres and rejoins still in fourth.

Verstappen tells the team, “you need to give me full power.”, and the respond, “you have full power”.

Mercedes tells Hamilton that his temps are getting better, he trails Verstappen by one second.

On lap 48 Bottas pits for medium tyres and rejoins in 12th.

On lO 49 Hamilton pits for medium tyres as well, and rejoins still in second place, 21 seconds behind the leader.

Verstappen is questioning the team that he should have pitted - the team tells him that Hamilton would have gotten by them.

Grosjean retires in the pits.

Hamilton has closed to 15 seconds behind the leader.

Mercedes is predicting that Verstappen’s tyres will be worn out at the finish.

Verstappen tells the team that his tyres are “dead”.

On lap 65 Hamilton is 3.2 seconds behind Verstappen.

On lap 65 Hamilton is now down to a 1 second gap, and is closing fast.

On lap 67 Hamilton passes Verstappnen for the lead into the first corner.

The next lap Verstappen pits for soft tyres, rejoining still in second place.

Albon passes Perez for tenth place. Bottas is closing on Raikkonen in seventh.

On lap 69 Vettel passes his team mate for third place.

On the final lap Hamilton cruises to the win ahead of Vertstappen and Vettel to take his seventh Hungarian GP win.