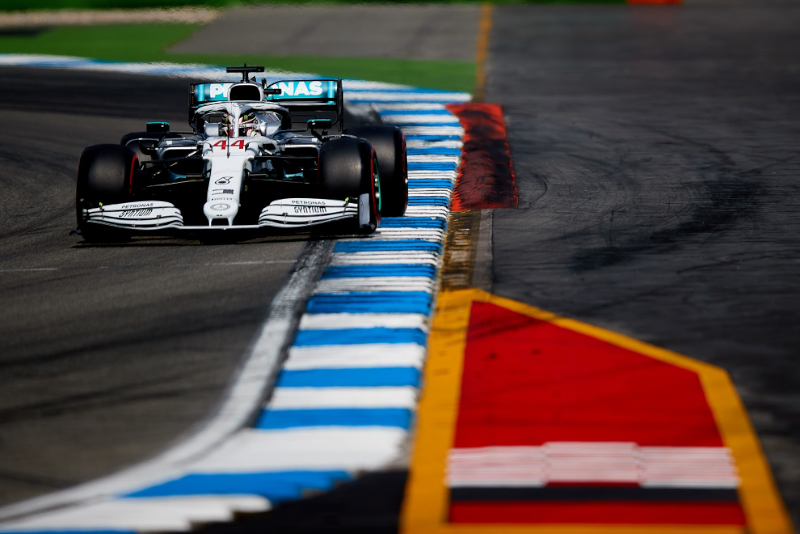 Qualifying for the German Grand Prix was a triumph for Lewis Hamilton as he won the pole for Mercedes' home race. After having the quickest car in all three practice sessions, qualifying turned into a disaster for Ferrari with the cars of Sebastian Vettel and Charles Leclerc breaking down at crucial moments. So Vettel will start last and Leclerc 10th.

Sainz set the early pace with a lap of 1:13.221, but it was not going to last long as the Ferraris and Red Bulls headed out with 10 minutes remaining. And then out came Hamilton and Bottas.

Meanwhile, Vettel was back in the pits with the engine cover off the car. Ominous.

On track, Hamilton was only 16th. It went better for Bottas who grabbed fourth.

With less than five minutes to go, Vettel had yet to set a time. And he would not as he climbed out of the Ferrari. It was a turbo problem.

Hamilton had another go and took third.

With three minutes remaining, Giovinazzi was 15th and on the cutoff line for drivers advancing to Q2. Perez was 14th and Albon was 16th.

The five drivers who were eliminated at the end of Q1 were: Norris, Albon, Russell, Kubica and Vettel.

Those that tried to use the medium compound Pirelli tires to set their best times in Q2 – and thus also be allowed to start the race on those tires – were: Hamilton, Leclerc and Bottas.

Others were now on their quick laps. But Verstappen got blocked by a Haas.

On the bubble with five minutes to go in Q2 was Perez. He was flanked by Giovinazzi in ninth and Hulkenberg in 11th.

Out front it was: Hamilton, Leclerc, Gasly, Bottas, Sainz and Grosjean.

Verstappen had not set a time yet. He started his flying lap with three minutes to go. And rocketed to fourth.

After the usual last-minute flurry, the five drivers who were eliminated at the end of Q2 were: Giovinazzi, Magnussen, Ricciardo, Kvyat and Stroll.

The fastest 10 drivers who moved on to Q3 were: Hamilton, Leclerc, Gasly, Bottas, Verstappen, Raikkonen, Sainz, Hulkenberg, Grosjean and Perez.

And then, disaster at Ferrari as Leclerc climbed out of the car! A problem with the fuel system.

Meanwhile Verstappen had slipped into second between Hamilton and Bottas. Gasly was fourth ahead of Grosjean and Sainz.

All nine drivers were on track in the last two minutes.

Hamilton's lap cost 1:11.793, but he kept the pole. Verstappen remained in second and Bottas third. Gasly wound up fourth ahead of Raikkonen, Grosjean, Sainz, Perez, Hulkenberg and Leclerc.