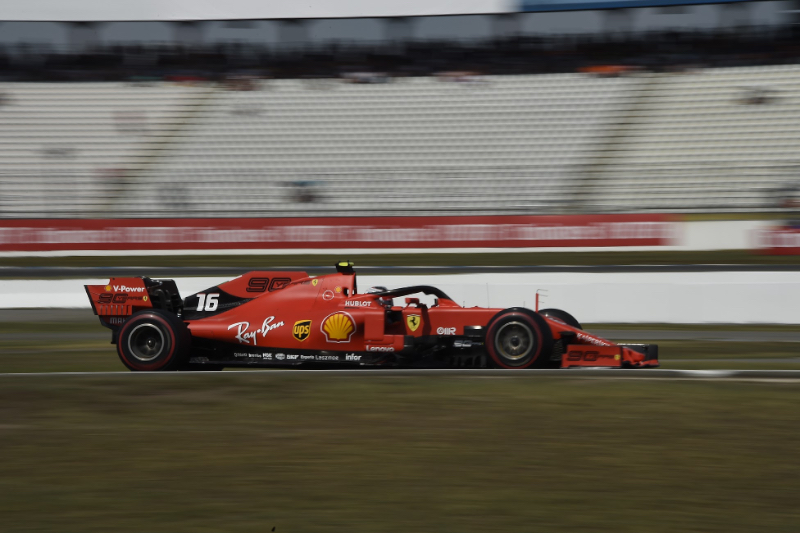 Charles Leclerc stayed hot despite cooling down. The Ferrari driver was fastest in the broiling conditions on Friday. With the forecast calling for cooler temperatures and possible rain on Saturday, Leclerc was worried about Mercedes and Red Bull. But he managed to beat them all in Free Practice 3.

Leclerc was fastest in the broiling Friday afternoon practice session with a lap 1:13.449.

Magnussen and Albon were the first out. The rain stayed away.

Hamilton, on the soft compound Pirelli slicks, clocked a 1:13.767 thirteen minutes into the session.

To celebrate 125 in motor sport, the Mercedes crew were wearing 1930s garb, and the front of the car was painted white like the Mercedes cars of the past.

Leclerc, driving for the historic Ferrari team, beat that with his 1:13.117. He also used the softs. His teammate Vettel slotted into second after clocking a 1:13.369. Hamilton improved his time but could do no better than third. Leclerc, meanwhile, trimmed his time down to 1:12.736.

The order as the halfway point of FP3 approached was: Leclerc, Vettel, Hamilton, Raikkonen, Albon, Verstappen, Hulkenberg and Norris.

A few minutes later Verstappen, on the mediums, moved up to third. Bottas was back in 10th.

And with about 22 minutes remaining, most of the drivers were in the pits preparing for their all-out qualifying sims on the soft compound slicks.

Bottas then clocked a 1:12.890, which put him third ahead of Verstappen and Hamilton. But then Verstappen did a flier on the softs and his 1:12.548 put him second.

Hamilton headed out with a dozen minutes remaining. But fourth was the best he could manage, so he was behind Leclerc, Verstappen and Vettel. But not for long because soon fourth belonged to Bottas. Then came Bottas, Magnussen, Sainz, Gasly, Raikkonen and Hamilton.

Hamilton's time had been deleted because he exceeded track limits. He kept his next lap and was now sixth behind Magnussen.

So Leclerc remained the hot driver in the cooler, albeit dry, conditions. Verstappen, Vettel, Bottas, Magnussen, Hamilton, Sainz. Gasly, Raikkonen and Grosjean rounded out the top 10.