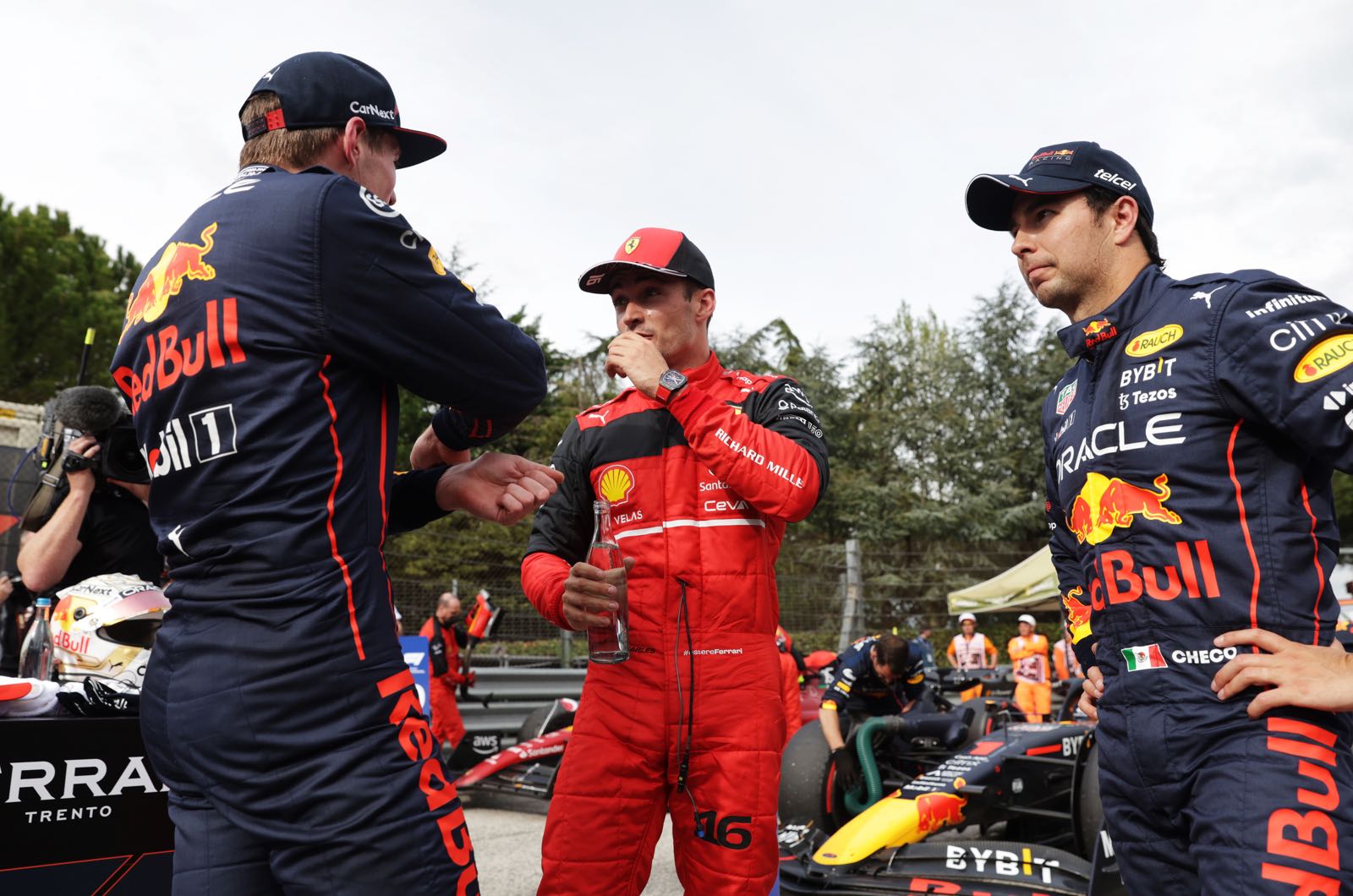 Q: Congratulations. It's not the start you would have wanted but you managed to turn it around talk us through it?

Max VERSTAPPEN: Yeah, that was very bad. I don't know exactly what happened or why it was so bad, just too much wheel spin, but after that we had to stay calm. And it initially looked like Charles was actually having a bit more pace but then I think he ran out of tyres and we could close the gap and go for the move into Turn 2. I know maybe tomorrow it might be again a bit different, but for sure today it worked out for us to be on this compound. So very happy to have a clean Sprint race at the end.

Q: Well, you were able to keep the pressure on Charles all race long and you showed that these cars can follow a lot better than they used to be able to. Will you have to be looking over your shoulder tomorrow?

Verstappen: Ah well, if I make a start like today for sure. But let's see, let's see tomorrow. I'm of course happy about today, but I know that tomorrow, you know, with also other tyre compounds coming into play it might be a bit different, but we had a good day.

Q: Well, despite what happened today, you’ve had great starts here in the history. So good luck tomorrow. Charles, congratulations, it obviously started a lot better for you than it ended but it's still a front-row start tomorrow. Talk us through the race today.

Charles LECLERC: Yeah, it's still a front-row start. We struggled with the tyres at the end, so we need to analyse that for tomorrow at the end the main race is tomorrow and we need to make sure that we are ready. But the pace was good until then and then we started to have some graining on the front left and lost it towards the end but it's fine, we will work and come back stronger tomorrow.

Q: Now, you may not be able to hear it but we definitely had the support that's in the crowd here for you. So maybe you can take this opportunity to share the love back with them?

Leclerc: Yeah, I mean it's incredible. Every time we are in Italy we have so much support and it's amazing to see so many people in the grandstands. Isperiamo domani si un altra fine. Grazie mille a tutti regazzi.

Q: Sergio, great race today. You certainly proved that it is possible to overtake on this track. What did you take off from the race today?

Sergio PEREZ: Yeah, I think it was important to minimise qualifying from yesterday you know it was… The red flags out there really, we did struggle a lot with that, so we didn't put a lap together when in mattered. But yeah, today we managed to recover and I think we are in a great position for the fight tomorrow.

Q: Well, you’re starting third on the grid tomorrow, with Max first. How much can you make a team effort tomorrow to maximise the points?

Perez: Yeah, it would be ideal, you know, to get a one-two. That would be great for us but probably not for the tifosi, but we will try.

Q: Welcome to the top three finishers of the F1 Sprint and our top three on the grid for Sunday's Emilia Romagna Grand Prix. In third place, Sergio Pérez. In second place, Charles Leclerc and our winner, who takes eight world championship points and will start first on the road on Sunday, Max Verstappen. Max, it was tense it was breathless. Talk us through it from the moment you let out the clutch at the start.

Verstappen: Terrible when I let the clutch go, just a lot of wheel spin and no traction. So my start was very, very poor. And then of course after the Safety Car restart it seemed like initially Charles was very quick and he was actually pulling away like a tiny bit lap after lap. But then at one point the tyre deg came into play and it seemed like from that point on, I could actually then close the gap again. And yeah, of course at one point… It's very tricky once you get around that one-second window to get super close. Of course with these cars it is better to follow but it's still very hard to pass because you still need to use up your tyres and especially with the deg we had on the soft, like getting in that DRS window was hard. But then, yeah, once I got into it, I think on the second attempt, we had a good little battle into Turn 2. Buy clearly the we had a bit more pace at the end of the race, yeah.

Q: You had a bit more pace was that as a result of you playing a bit of a waiting game early on in the race?

Verstappen: Well, I think we were pretty much flat out, you know, in the beginning. It's not many laps you have anyway in the race. But of course we knew that on these tyres it was going to be tough at the end of the race, like the last few laps, but yeah, it worked out for us.

Q: And this is the first battle for the lead that we've had in the F1 Sprint Just how much did you enjoy it?

Verstappen: Well, my opinion is still the same about the Sprint, but the battle is good. Yeah, it doesn't matter if it's in the Sprint or in the main race.

Q: Charles, coming to you now. You made a tremendous getaway at the start. Just talk us through the braking zone for Turn 2 when you and Max were side-by-side.

Leclerc: I had a very good start, so yeah, we ran side-by-side through Turn 1 and I could focus on my own race from that moment onwards. I tried to push at the beginning to get a bit of a gap and for Max not being the DRS zone, because I knew that I will have been vulnerable if it was the case. But I paid the price a little bit later on in the race and had some graining and really struggled in the last two, three laps. So, it's like this but it's only the sprint race and we'll learn from this to be better tomorrow.

Q: What are the main lessons - that's what I was going to ask you next - that you've learned today that will help you in the Grand Prix itself tomorrow?

Leclerc: Well, that we need to fix the graining most of all. It felt like we damaged the tyres a bit more, especially the front right for some reason. So, we'll focus on that for tomorrow's race.

Q: Checo, coming to you now, tremendous race from you to go from seventh to third, helped again by a great start.

Perez: Yeah, we had a really nice start. It got a bit messy into Turn 1 with Daniel, I think. I couldn't avoid him, so we touched. Luckily, there was no damage for both of us. And yeah, then there was a Safety Car. And it felt quite short that the time, the race, you know? Because we lost, I think, three laps. And yeah, at the restart was just about getting as further up as possible. So, I think P3 is, it's a great position for tomorrow.

Q: You did a lot of overtaking. Where was the car particularly strong this afternoon?

Perez: I think we looked after the tyre really well. I think that particularly, it's a good step, especially given the deg we've been having - but it's only a short race so we'll see tomorrow if we made the right steps.

Verstappen: Well, I mean, Lando had a decent start so there's no excuse. I mean my start was just terrible and yeah, I didn't have gear sync for whatever reason. I need to see exactly what went wrong.

Leclerc: I think the pace are quite similar. What made the difference at the end is the graining phase that I went through at the end of the race and if we managed to cure that for tomorrow, I'm pretty sure that we're in the fight for the win. If not, it's going to be a bit more difficult. But anything is possible for tomorrow, I think.

Verstappen: Yeah, like Charles said, I don't think it was because of the DRS, it was just because at the end, Charles was definitely struggling more with the graining, so then, of course, I could close up and, of course, use the DRS then to get by - but I think it was more just a bit of a waiting game because every lap, it just seemed like the gap or the difference in the two cars was getting bigger in terms of lap time and so on.