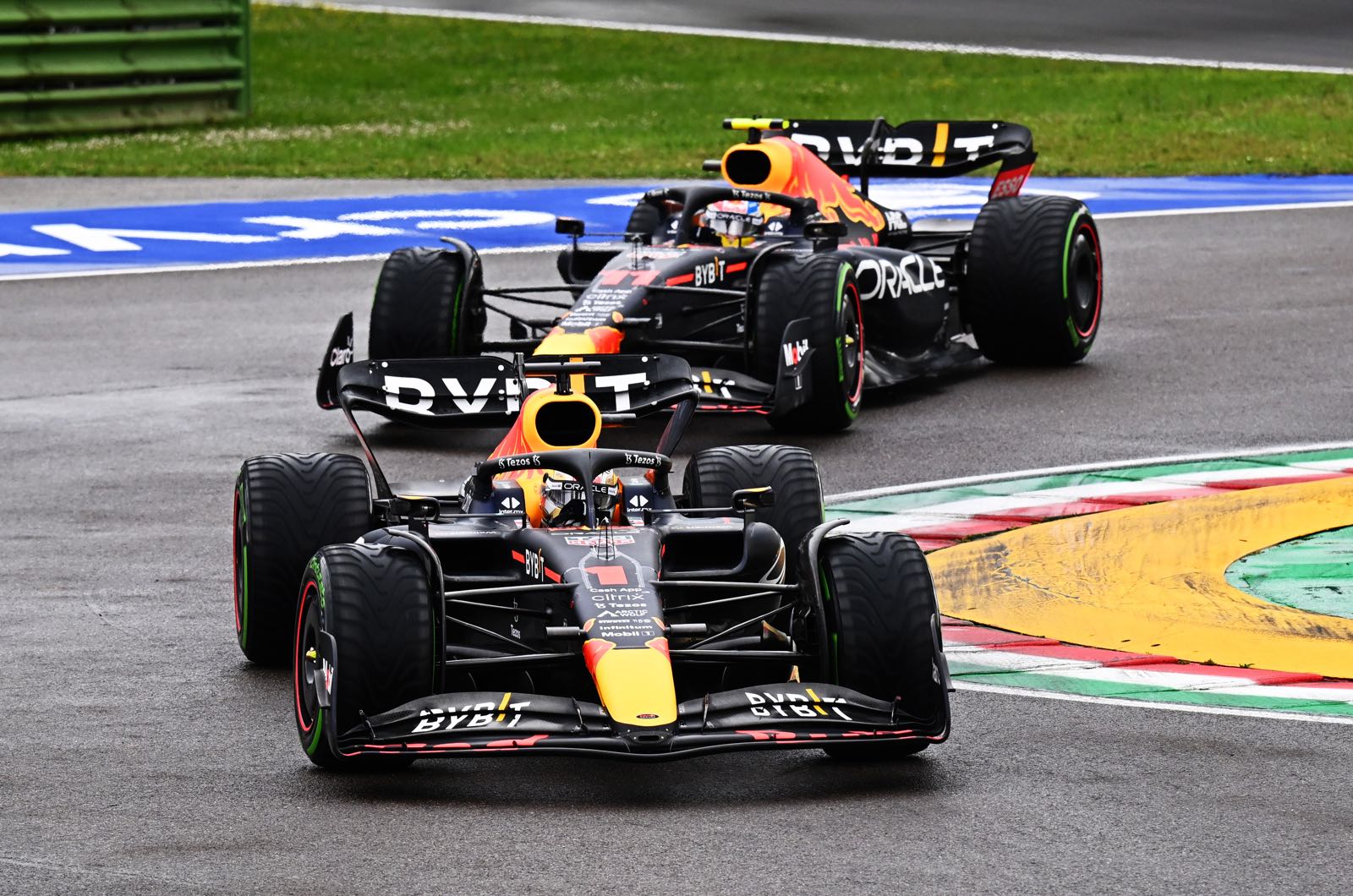 Max Verstappen took maximum points in race with drying conditions in his Red Bull to win the Emilio Romagna Grand Prix in Imola, 16.527 seconds ahead of his team mate Sergio Perez. Lando Norris finishes third, 34.834 seconds behind the winner.

Verstappen’s win is his second of the season and 21st of his careeer. It is the 77th win for Red Bull Racing.

Charles Leclerc continues to lead the Drivers Championship with 86 points, 27 points ahead of Verstappen in second place with 59 points, and Perez in third win 54 points.

Ferrari is still in front of the Constructors Championship with 124 points, over Red Bull in second with 113 points and Mercedes GP in third with 77 points.

George Russell (42.506s) in the Mercedes GP was fourth, followed by Valtteri Bottas (43.181s) in the Alfa Romeo-Ferrari was fifth, Charles Leclerc (56.072s) after a late race spin in the Ferrari while chasing Perez was sixth, Yuki Tsunoda (1m01.110s) in the AlphaTauri-Red Bull was seventh, Sebastian Vettel (1m10.892s) in the Aston Martin Racing-Mercedes was eighth, Kevin Magnussen (1m15.260s) in the Haas-Ferrari was ninth and Lance Stroll (1 lap) in the second Aston Martin took the final point in tenth place.

Lewis Hamilton in the second Mercedes struggled all day and finished a distant 14th place.

With a wet track before the start, the field got prepared for a wet-dry race.

All drivers starting on intermediates with more rain expected in the next half hour.

After yesterday’s Sprint Race, Verstappen is on pole with Leclerc alongside on the front row, Perez and Sainz start on row 2, Norris and Ricciardo on row 3, Bottas and Magnussen on row 4 and Alonso and Schumacher rounding out the top ten.

The field came around on the formation lap, the lights went out and the race began with Verstappen getting away well, with Perez getting past Leclerc. Norris gets past Leclerc as well. Sainz is touched by Ricciardo and spins and is out of the race. Schumacher spins as well, but continues. The safety car is out.

At the start of lap 5 the race resumes with Verstappen in the lead. Alonso falls back to 11th, and appears to have some body damage.

On lap 12 Russell gets past Magnussen, but runs wide and Magnussen gets back by. Later in the lap Russell makes the pass for fifth into the chicane. Bottas is chasing Magnussen and passes him for sixth.

There is talk of more rain in the next 20 minutes

On lap 17 Ricciardo pits and is the first to switch to medium dry tyres.

The next lap Verstappen, Leclerc and Norris pit as well and all drivers are on dry tyres. Leclerc has a slightly slow stop and Perez is able to pass Leclerc for second back on track.

Ocon is given a 5-second penalty for an unsafe release.

On lap 23 Perez sets fast lap at 1m22.583s. Leclerc is chasing Perez but has not been about make a move.

Stroll is challenging Tsunoda for ninth.

Leclerc has closed up on Perez once again after Perez cut across the chicane.

On lap 32 Ricciardo pits and changes to hard tyres.

On lap 34 the stewards enable DRS.

On lap 45 Hamilton takes a look at passing Gasly, but is bit able to make it.

Tsunoda is closing on Magnussen in eighth.

On lap 47 Tsunoda makes the pass on Magnussen in DRS.

On lap 50 Lelerc pits for soft tyres, Norris passes him as he rejoins the track. Perez pits the next lap.

On lap 51 Leclerc passes Norris for third. Verstappen pits for soft tyres as well, and rejoins in first.

On lap 53 Leclerc spins, touches the barrier, but continues and pits with wing damage. Leclerc rejoins in ninth.

There are reports of light rain falling with 3 laps remaining.

Bottas is chasing Russell in fourth.

On lap 62 Leclerc passes Tsunoda for sixth. Verstappen reports to the team that there is some rain.

At the finish Vestappen wins over Perez and Norris.