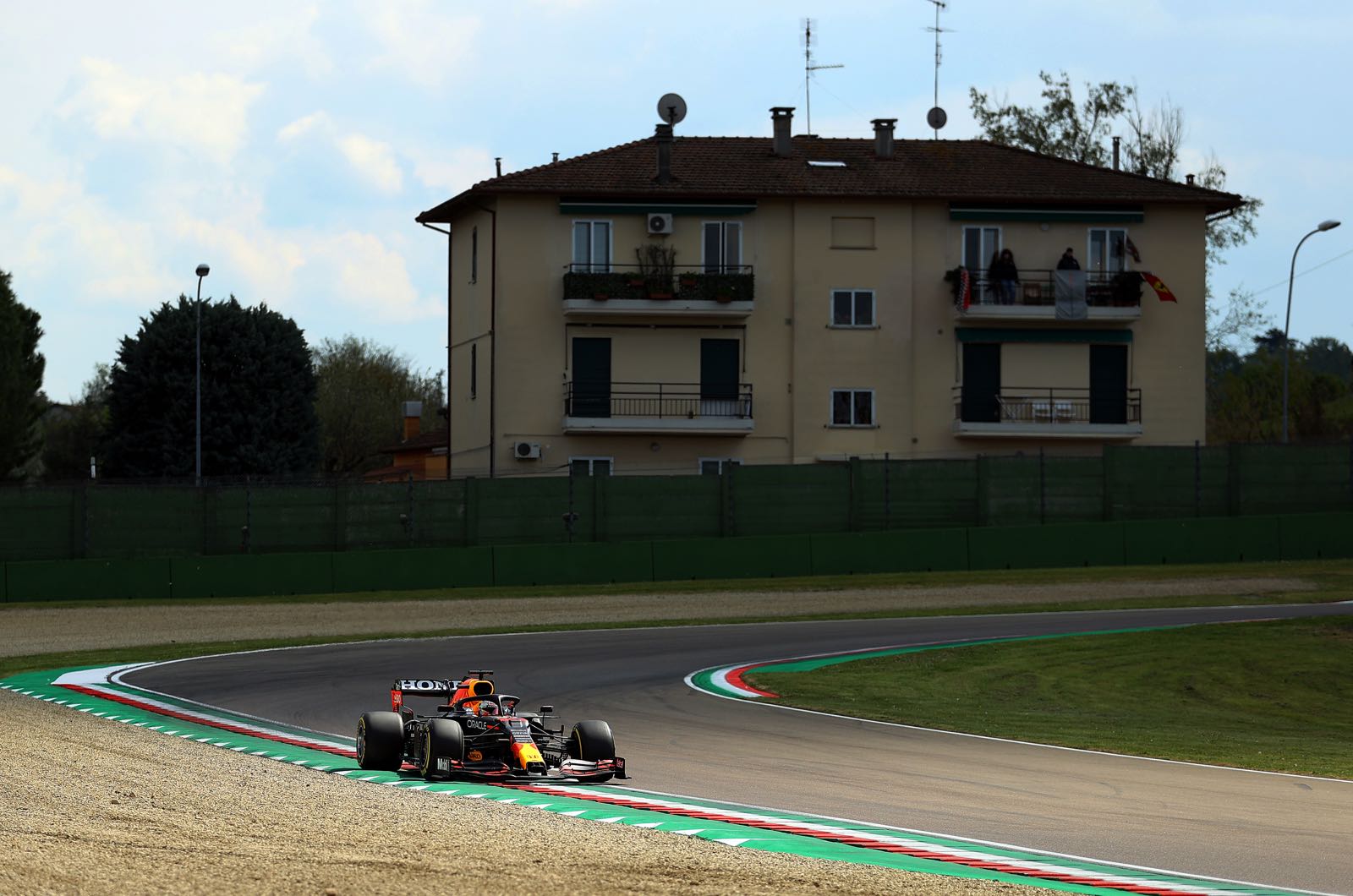 Max Verstappen in the Red Bull-Honda won the wet-drying race at Imola, 22.000 seconds ahead of the Mercedes GP of Lewis Hamilton in seond, and Lando Norris in third, 23.702 seconds behind the winner.

The win is Verstappen’s 11th of his career. Hamilton (44 points) holds on to the championship lead by one point over Verstappen, Norris is third (27), over Leclerc (20) and Bottas (16).

Charles Leclerc (25.579s) in the Ferrari was fourth, Carlos Sainz (27.036s) in the second Ferrari was fifth, Daniel Ricciardo (51.220s) in the second McLaren was sixth, Lance Stroll (51.909s) in the Aston Martin-Mercedes scored Aston's first point finish in seventh, Pierre Gasly (52.818s) in the AlphaTauri-Honda was eighth, Raikkonen (1m04.773s) in the Alfa Romeo-Ferrari was ninth and Esteban Ocon (1m05.704s) in the Alpine-Renault took the final point in tenth place.

It is damp as the race is about to start and drizzing. All drivers starting on some type of wet weather tyres. Sebastian Vettel starts from the pit lane.

On the formation lap Leclerc spins, but continues around to the start.

The lights go out and the race begins with Hamilton and Verstappen battling into the first corner, Verstappen taking the lead, Hamilton bumping over the curbs. Nicholas Latifi makes contact with Nikita Mazepin spins into the barriers and is out. The safety car is out. Ocon pits for intermediate wet tyres.

Hamilton has some front wing damage.

On lap 4 Mick Schumacher crashes while trying to keep tyres warm, and limps to the pits without a front wing, but the pit lane is closed, so he needs to do another lap.

The marshals clear up Latifi’s car. During the safety car period the rain is easing up a bit.

At the start of lap 7 the safety car comes in and the race resumes, with Verstappen in the lead, Hamillton and Leclerc behind.

On lap 8 Verstappen sets fastest lap at 1m32.925s. Norris repasses Gasly for sixth, Sainz gets by him as well for seventh place.

Perez is reporting a power steering issue. Gasly and Stroll are battling for eighth place.

Verstappen reports that it is raining harder.

Stroll passes Gasly, who is struggling on full wet tyres, for eigth. Hamilton sets another fast lap at 1m28.724s.

Perez is being handed a 10-second penalty

Sainz goes off the track, but continues.

On lap 22 Vettel pits and is the first to switch to medium dry tyres - Vettel also is handed a 10-second penalty for not having his tyres fitted in time before the start of the race.

Hamilton has closed up to two seconds behind Verstappen, and reports that his tyre grip is inproving.

Vettel is strugging on his dry tyres.

On lap 29 Verstappen pits from the lea d and takes on medium dry tyres, and rejoins third. Sainz and Ricciardo pit.

The next lap Hamilton and Leclerc pit. Hamilton has a slow stop and rejoins in second place behind Verstappen. Perez, Norris and Bottas all pit, all taking on medium dry tyres.

At lap 30 Hamilton slides off the track while getting by back-markers and spends a long time trying to get out of the gravel trap. He reverses back out onto the track and gets back running in seventh place.

On the fast section after the start-finish line, Russell makes a run to pass Bottas on the outside, the two come together and crash coming down into Tamburello. The safety car is out.

Hamilton pits for new tyres and a front wing change.

The race is red flagged at lap 34, as the race stewards are concerned about the integrity of the barriers, and are cleaning up the debris.

The cars return to the pitlane.

After a half hour the track is cleaned up and the teams get ready to resume the race.

The cars return to the track, running behind the safety car, and the race will restart with a rolling start.

Verstappen half spins behind the safety car, but saves it and continues.

On lap 35 the lap is resumed with Verstappen in the lead, Norris passes Leclercc for second. Tsunoda spins. Hamilton up to eighth.

Norris is under a second behind Verstappen.

On lap 38 Perez goes spins off from fourth, and rejoins 14th.

Hamilton is closing on Sainz in fourth.

Tsunoda is warned that he keeps going over the track limits.

On lap 49 Hamilton makes an attempt to pass Sainz, but cannot do it.

The next lap Hamilton passes Sainz for fouth place, and now chases after Leclerc.

Norris reports that he is feeling some vibrations from his car.

Hamilton is within a second of Leclerc, Norris a second further up the road.

On lap 55 Hamilton passes Leclerc under DRS and takes third place - Borris is a second ahead. Hamilton on medium tyres chases Norris on soft tyres.

Norris tells the team he is struggling for grip out of the corners.

Norris complains that his clutch is slipping as well - the team reports that he is knocking into the pedal with his foot.

On lap 59 Hamilton passes Norris in the DRS zone to take second place.

Mazepin spins but continues. Vettel retires in the pits.

Verstappen crosses the finish and wins the Emilio Romagna GP, Hamilton second and Norris holds on for third.