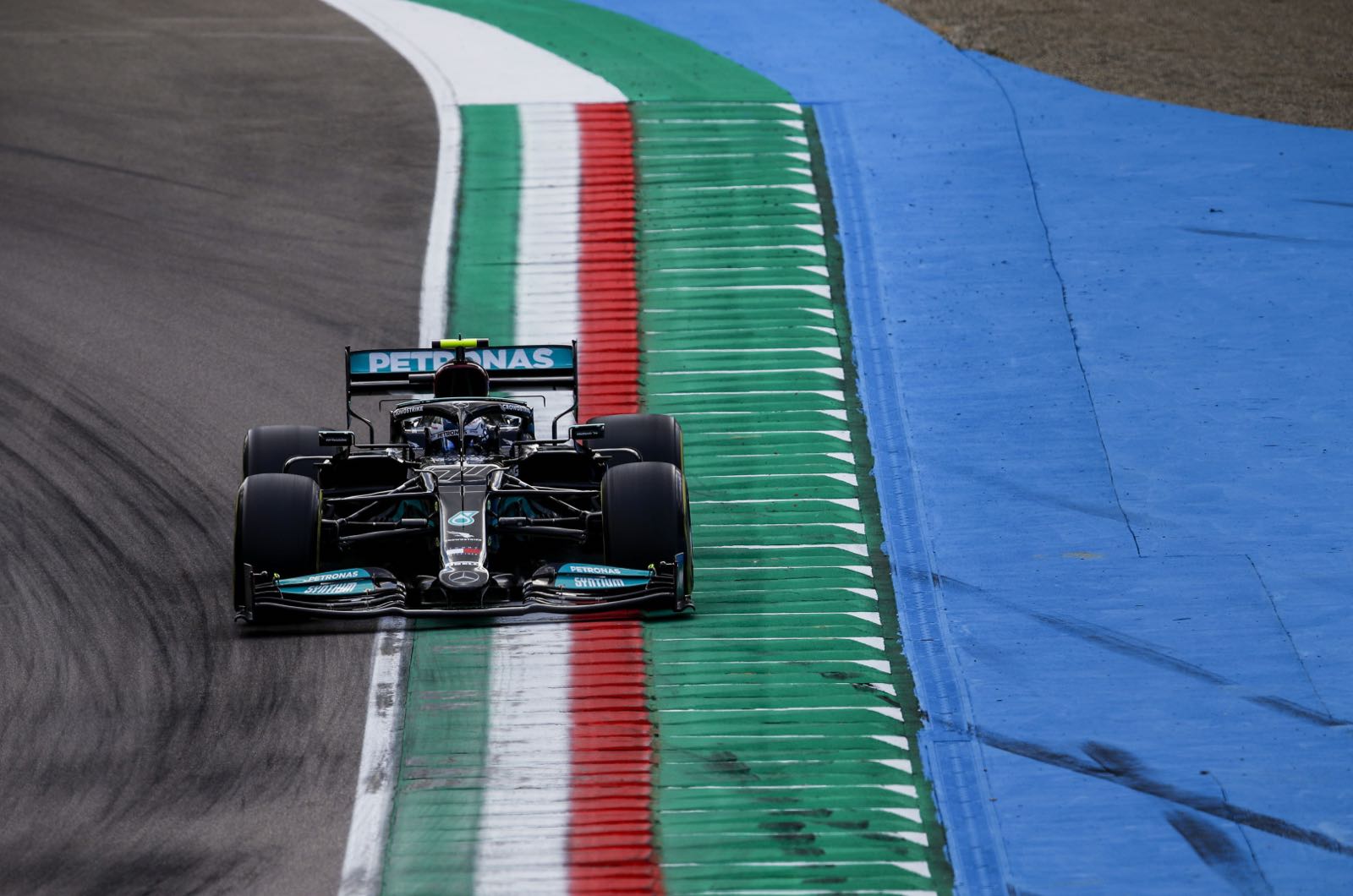 Valtteri Bottas edged his Mercedes teammate Lewis Hamilton by one-tenth of a second to post the fastest lap time in the second practice session for the Emilia Romagna Grand Prix. Chief rival Max Verstappen missed much of the session when his Red Bull broke down.

Bottas was quickest in FP1 with a time of 1:16.564. The session had to be red flagged for 10 minutes after Perez and Ocon tangled on the track.

Ocon slowed before Turn 5 in order to let Perez by, as well as moving entirely to the inside of the turn. Perez was on a fast lap. The two cars reached the apex at the same time, and just barely touched wheels. In the end, both drivers agreed in the hearing that it was an unfortunate miscommunication of timing between them, not helped by the fact that both drivers had limited or no communications with their teams at the time. Both drivers agreed that neither was at fault.

First out on the track were Russell, Ocon and Raikkonen. But it was Leclerc who set the early pace with a lap of 1:17.076 around the 19-turn Imola circuit.

Ten minutes into the session Verstappen slowed on the pit straight and then parked at pit exit when his car lost drive. “Something snapped,” he radioed.

With the early runs on the medium tires over, and with 20 minutes gone, most drivers were in the pits preparing for their qualifying simulations. The order was: Bottas, Hamilton, Sainz, Perez, Verstappen, Leclerc, Tsunoda, Ricciardo, Ocon and Norris.

First out on the Pirelli soft compound tires were the Ferrari teammates. Sainz turned a 1:15.834 which put him third. Leclerc had his lap time deleted for exceeding track limits.

The Mercedes teammates, meanwhile, remained in the pits until Hamilton went out on the softs with 35 minutes remaining. Bottas went out a few minutes later. But while Bottas did not improve he remained in first ahead of Hamilton (by one-tenth of a second), Gasly, Sainz, Leclerc and Perez.

Verstappen’s car had been returned to the garage, but could it be repaired in the final 25 minutes? The answer was no. He had completed only 5 laps.

The other drivers used those minutes for race simulations.

The top 10 at the end of FP2 were: Bottas, Hamilton, Gasly, Sainz, Leclerc, Perez, Tsunoda, Norris, Giovinazzi and Stroll.