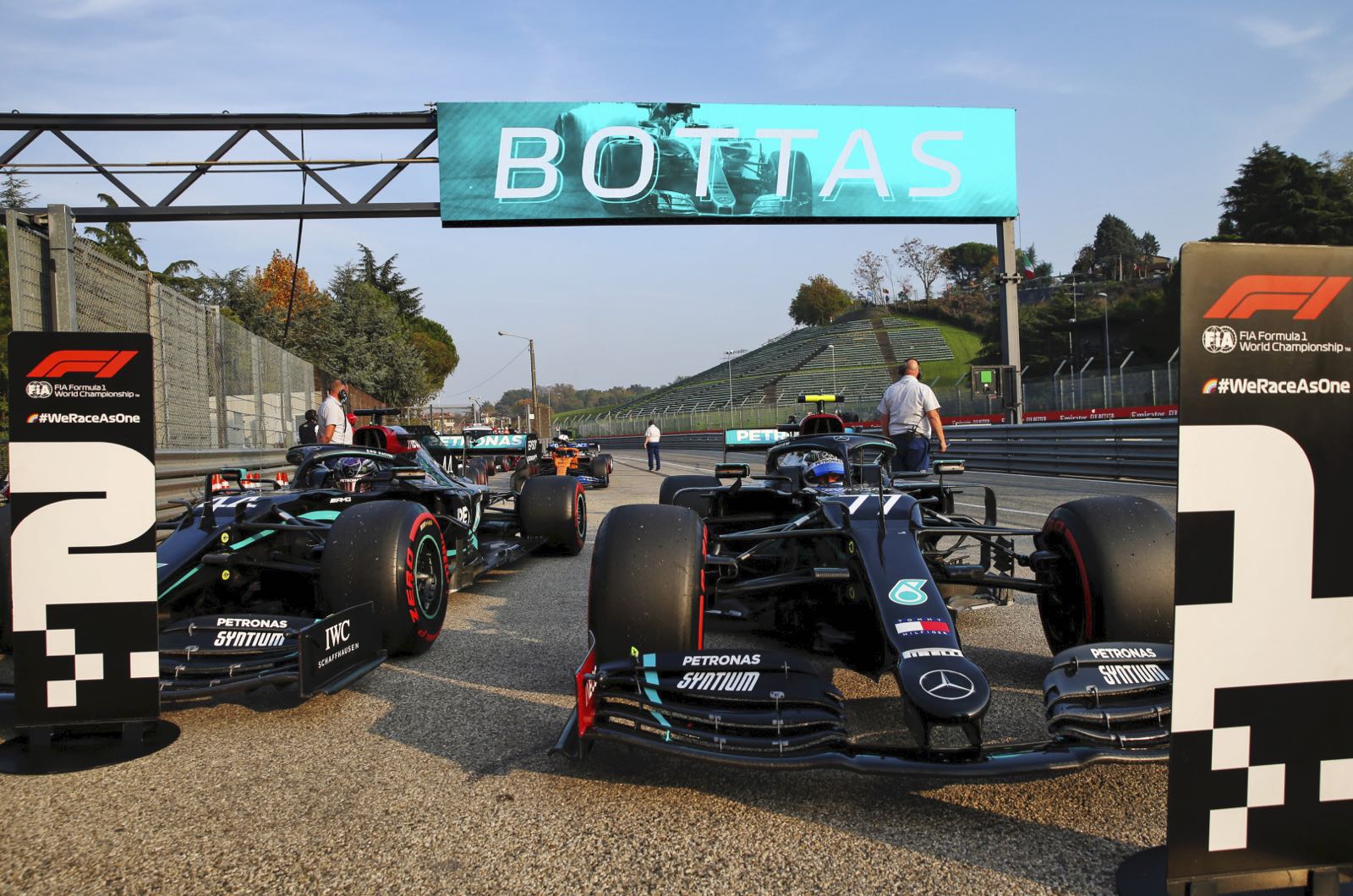 Valtteri Bottas edged out Mercedes teammate Lewis Hamilton by 0.097 of a second to snatch the pole for the Emilia Romagna Grand Prix.

"I knew I had to improve on the last lap to find those small gains," Bottas said after winning his 15th F1 pole.

When there were five minutes remaining in Q1, Giovinazzi was 15th and on the cutoff line. Sainz was 14th and Norris was 16th.

Bottas had been 20th but then jumped up to second behind Hamilton. Then Bottas went ahead at 1:14.221.

The five drivers who were eliminated at the end of Q1 were: Grosjean, Magnussen, Raikkonen, Latifi and Giovinazzi.

Leclerc, Bottas and Hamilton headed out on Pirelli's medium compound tires, as did Verstappen and Albon.

Hamilton turned a 1:14.643 but Bottas went 0.05 of a second quicker. So the order was Bottas, Hamilton, Gasly, Norris, Ocon and Kvyat with 10 minutes remaining.

Verstappen pitted, saying he had no power. Teammate Albon had a spin.

Tenth and on the bubble with five minutes to go was Leclerc, and Sainz was ninth while Albon was 11th. Verstappen had yet to set a time.

There was a flurry of activity on the track in the final couple of minutes. Verstappen, who had a spark plug replaced, was out there.

The five drivers who were eliminated at the end of Q2 were: Perez, Ocon, Vettel, Russell and Stroll.

The fastest 10 drivers who moved on to Q3 were: Bottas, Hamilton, Gasly, Albon, Ricciardo, Verstappen, Leclerc, Kvyat, Sainz and Norris.

Sainz was the first out and soon all 10 drivers were on track.

Hamilton clocked a 1:13.781. Bottas slotted into second, 0.031 of a second slower. Verstappen was third ahead of Gasly, Leclerc, Norris, Kvyat, Ricciardo, Sainz and Albon.

Everybody headed back to pits to gear up for a final run.