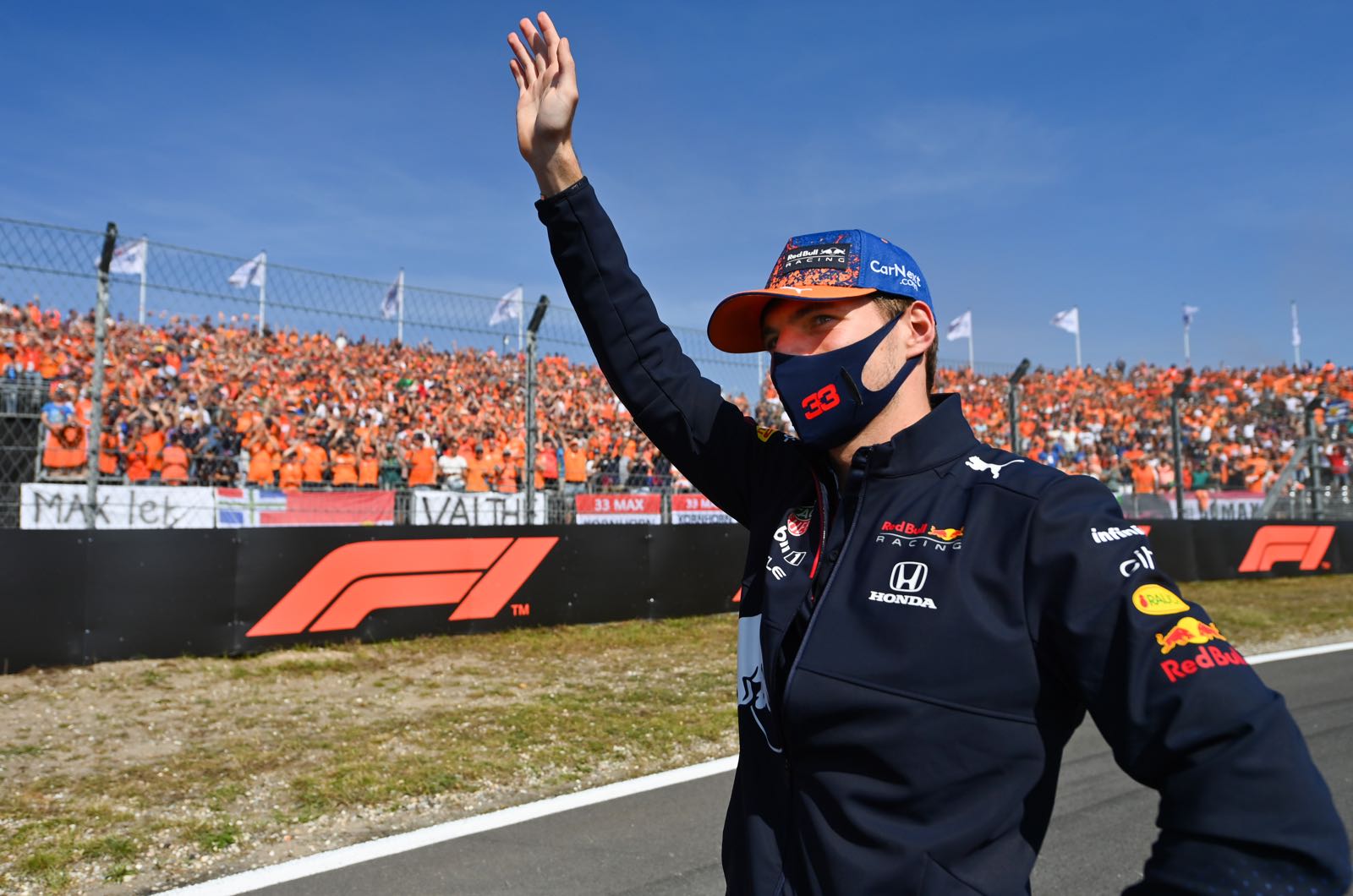 Max Verstappen won the Dutch Grand Prix at Zandvoort from pole in his Red Bull-Honda. Lewis Hamilton finished second in his Mercedes GP, 20.932 seconds behind. His team mate Valtteri Bottas finished third, 56.450 seconds behind the winner.

The win is Verstappen’s seventh win of the season, and 17th career win. Verstappen retakes the Drivers Championship lead over Hamilton.

Pierre Gasly (1 lap) in the AlphaTauri-Honda was fourth, followed by Leclerc in the Ferrari in fifth, Fernando Alonso in the Alpine-Renault in sixth, Carlos Sainz in the second Ferrari in seventh, Sergio Perez in the second Red Bull in eighth, Estabon Ocon in the second Alpine in ninth and Lando Norris in the McLaren-Mercedes taking the final point in tenth.

A sea of Verstappen fans surrounds the circuit at the Zandvoort circuit as he sits on pole for his first home Grand Prix. Hamilton sits alongside on the front row - the first time they are alongside since their altercation in Silverstone Bottas and Gasly make up row 2, the Ferraris of Leclerc and Sainz are on row 3, Giovinazzi and Ocon on row 4 and Alonso and Ricciardo round out the top ten starters.

The projected quickest strategy is to start on soft tyres, and then between lap 25-30 change over to hard tyres to the finish. The top ten starting on soft tyres.

At the appointed time the field came around to the grid, the lights went out and the race started the Verstappen gets in the lead ahead of Hamilton, Bottas, Gasly, Leclerc and Sainz, many in the field battling for position.

Ricciardo’s McLaren is smoking but continues.

Hamilton complains that he is going to struggle to keep pace on his soft tyres.

On lap 20 Hamilton pits from second place for medium tyres, and rejoins in third.

The next lap Verstappen pits from the lead for medium tyres as well, and rejoins in second ahead of Hamilton by 2 seconds. Bottas leads the race.

On lap 24 Gasly pits from fourth for medium tyres and rejoins seventh.

Bottas reports that his tyres are going off.

Verstappen is told that he needs to pass Bottas, if he can.

On lap 30 Verstappen passes Bottas for the lead. Bottas lets Hamilton through for second place.

Russell is handed a five-second penalty for speeding in the pits.

Leclerc pits from fourth for hard tyres and rejoins in fifth.

Mercedes tells Bottas to use his tyres to there best effect now.

On lap 36 Vettel spins but continues.

On lap 39 Hamilton pits for another set of medium tyres and rejoins still in second.

The next lap Verstappen pits from the lead, changing to hard tyres, rejoining in the lead, 2.9s ahead of Hamilton.

On lap 43 Norris finally pits for hard tyres and rejoins in 11th ahead of Russell.

Hamilton is worried that his medium tyres won’t last against Verstappen’s hard tyres.

Mazepin pulls into the pits and retires.

Ocon reports that he thinks he caught a plastic bag in one of his front brakes.

Hamilton reports to the team that he doesn’t think he can make it to the finish on his tyres.

On lap 49 Perez pits for soft tyres and rejoins in 12th.

Tsunoda pulls into the pits and retires.

On lap 55 Hamilton has closed the gap on Verstappen to 1.8 seconds.

Hamilton reports that "these tyres are starting to drop off man.”

On lap 68 Bottas pits and rejoins in third, going for a fast lap.

On lap 70 Hamilton pits for soft tyres and rejoins still in second.

On lap 72 Verstappen closes the finish in first, Hamilton finishes second 20.932 seconds behind, taking the fastest lap on the last lap at 1m11.097s. Bottas finishes third.

The crowd goes crazy as their local hero takes the win as he is draped in the Dutch flag.