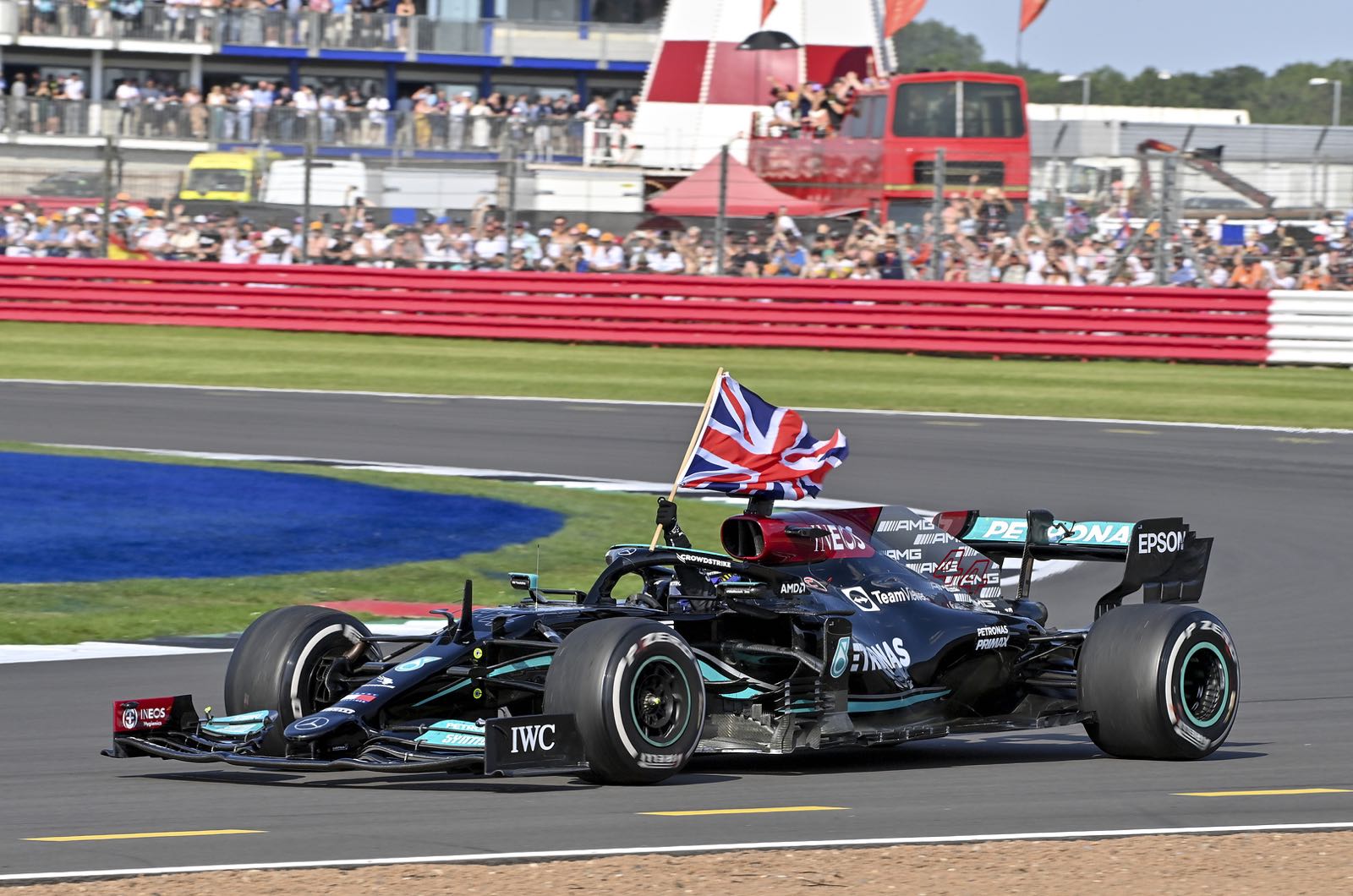 Lewis Hamilton won the British Grand Prix at Silverstone in his Mercedes GP, 3.871 seconds ahead of Charles Leclerc in his Ferrari. Valtteri Bottas in the second Mercedes was third, 11.125s behind the winner.

The win is Hamilton’s fourth win of the season, his eighth career British GP victory, and 99th career victory. Hamilton closes the drivers championship gap to 8 points behind Verstappen.

Lando Norris (28.573s) in the McLaren-Mercedes finished fourth, followed by his team mate Daniel Ricciardo (42.624s) in fifth, Carlos Sainz (43.454s) in the second Ferrari was sixth, Fernando Alonso (1m12.093s) in the Alpine-Renault was seventh, Lance Stroll (1m14.289s) in the Aston Martin-Mercedes was eighth, Esteban Ocon (1m16.162s) in the second Alpine was ninth and Yuki Tsunoda (1m22.065s) in the AlphaTauri-Honda took the final point in tenth place.

Before the start of the British Grand Prix the sun is shining and temperatures going up.

After yesterday’s first sprint qualifying race Max Verstappen starts on pole with Hamilton alongside on the front row, Bottas and Leclerc on row 2, Norris and Ricciardo on row 3, Alonso and Sebastian Vettel on row 4 and Ocon and Sainz rounding out the top ten runners.

Perez will start from the pitlane.

Tyre choice is open for the start of the race, with all drivers starting on medium tyres, except Sergio Perez on hard tyres starting from the pitlane.

At the appointed time the field comes around, the lights go out and the race starts with Verstappen in the lead with Hamilton in second, into Copse corner Hamilton and Verstappen battle into the corner and touch, Verstappen goes off into the tyre barriers - Leclerc takes the lead, Hamilton continues in second place - the safety car is out. Verstappen gets out of his Red Bull-Honda. The race is red flagged after two laps to repair the barriers.

Hamilton is under investigation for his incident with Verstappen.

The drivers get back in their cars - they are allowed to change their tyres.

The drivers come around to the grid, with Leclerc leading Hamilton and Bottas, the lights go out and the race resumes with Leclerc getting in the lead with ahead of Hamilton, Norris Bottas and Ricciardo. Vettel spins and down to the back.

Hamilton is handed a 10-second time penalty for his earlier incident with Verstappen.

On lap 13 Perez passes Giovinazzi for 12th place. Vettel up to 17th.

Hamilton tells the team, “struggling to get the rears down man, they aren’t stabilizing.”

Leclerc tells Ferrari, “the engine stopped, it started again, tell me what is happening!”

Hamilton closes to under a second and sets another fast lap at 1m32.291s.

On lap 19 Gasly, Perez, Raikkonen and Vettel all pit.

Sainz is closing on Ricciardo.

On lap 21 Ricciardo pits from fifth for hard tyres and rejoins in ninth.

Norris pits from third for hard tyres and rejoins in sixth.

Bottas pits from third for hard tyres and rejoins fifth.

The next lap Norris passes Alonso for fifth.

On lap 25 Alonso pits for hard tyres and rejoins in tenth.

On lap 28 Hamilton pits from second place for hard tyres and his ten-second penalty, and rejoins in fifth place, 35.1s behind Leclerc.

On lap 29 Sainz pits from second for

Gasly pits as well - both having slow stops.

On lap 30 Leclerc pits from the lead for hard tyres and rejoins still in the lead.

Sainz is closing on Ricciardo in fifth.

On lap 39 Perez pits from ninth for medium tyres and rejoins in 17th, and quickly passes Vettel for 16th.

Mercedes instructs Bottas to not hold up Hamilton.

On lap 42 Hamilton sets another fast lap at 1m30.160s, and 6.1 seconds behind the leader and hopes to catch Leclerc before the end.

Sainz is closing on Ricciardo in fifth.

Hamilton tells the team about Leclerc, "He’s picking up the pace man."

On lap 49 Hamilton is under a second behind Leclerc.

On lap 50 Hamilton goes down the inside of Leclerc at Copse corner, Leclerc goes wide and Hamilton takes the lead.

Hamilton crosses the finish first over Leclerc and Bottas.