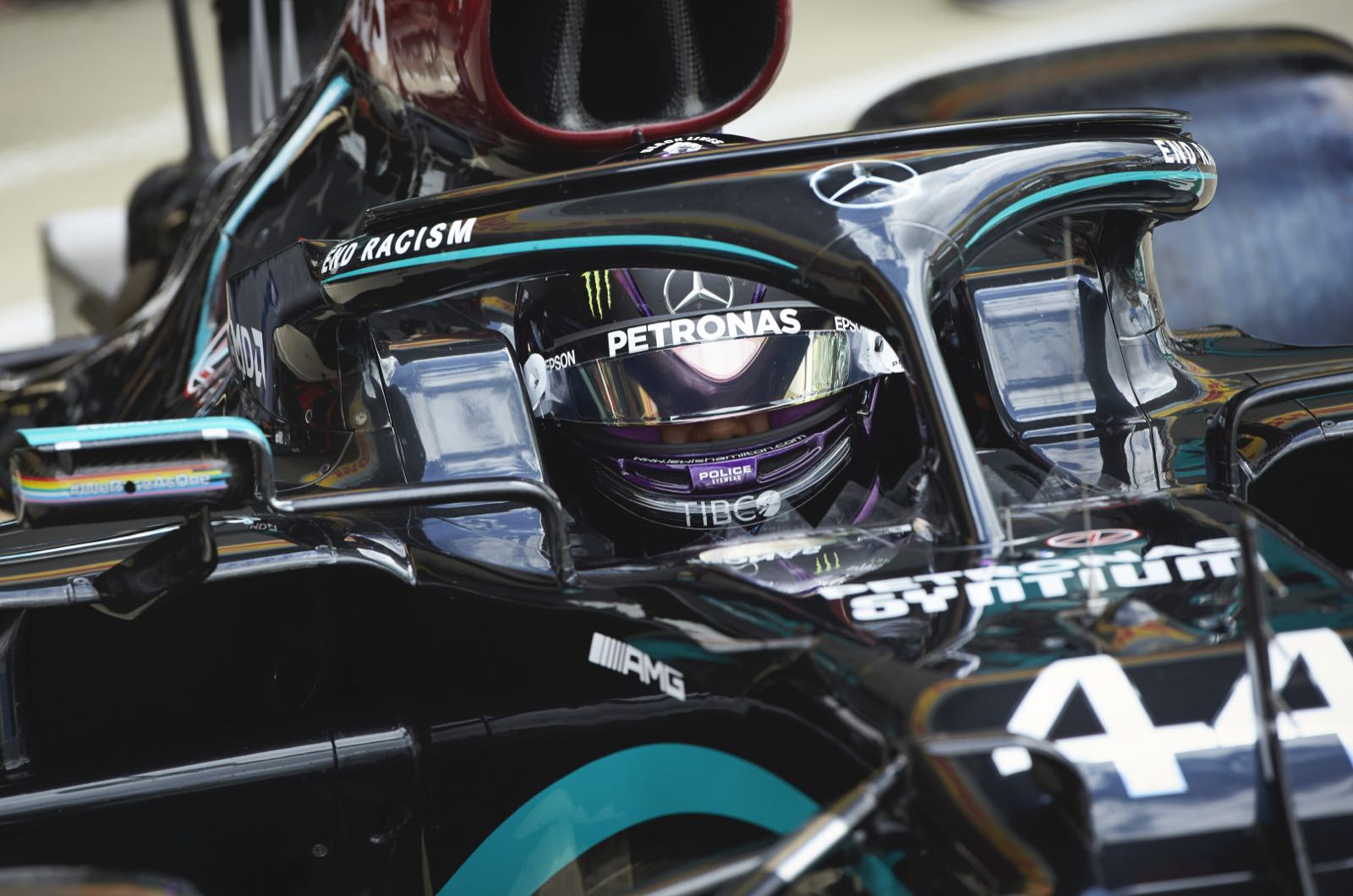 Lewis Hamilton won the British Grand Prix at Silverstone in his Mercedes GP. even though his front tyre failed on the last lap and his limped home to the checquered flag.

Max Verstappen in the Red Bull-Honda finished second, 5.856 seconds behind, and Charles Leclerc in the Ferrari finished a lonely race in third, 18.474 seconds behind the winner.

The win is Hamilton’s third win in a row, Mercedes GP taking their fourth win in a row opening the 2020 season. Hamilton has taken a record setting seventh win in the British GP, and takes a 34 point lead in the world championship.

Daniel Ricciardo (19.650s) in the Renault finished fourth, followed by Lando Norris (22.277s) in the McLaren-Renault was fifth, Estabon Ocon (26.937s) in the second Renault was sixth, Pierre Gasly (31.188s) in the AlphaTauri-Honda was seventh, Alex Albon (32.670s) in the second Red Bull was eighth, Lance Stroll (37.311s) in the Racing Point-Mercedes was ninth and Sebastian Vettel (41.857s) in the Ferrari scored the final point in tenth place.

Before the start, the weather was sunny, with Hamilton on pole with team mate Bottas alongside on the front row, Verstappen and Leclerc were on row two, Norris and Stroll on row three, Sainz and Ricciardo on row four, and Ocon and Vettel rounding out the top ten on the grid.

At the appointed time, the drivers came around to the grid and the lights went out and the race began with Hamilton leading from Botas, Verstappen, Lecleeerc, Sainz, RIcciardo, Norris, Stroll, Ocon and Vettel.

On lap 2 Magnussen and Albon touch, Magnussen spinning off into the gravel and the safety car is out.

At the start of lap 6 the race resumed with Hamilton still in the lead over Bottas.

Ocon makes an attempt to pass Stroll, but can’t pull it off.

On lap 7 Albon pits and changes to hard tyres and rejoins last.

Gasly in 11th is pressuring Vettel.

On lap 13 Kvyat crashes out at Maggets with a suspected tyre puncture, and gets out of the car unscathed.

Almost all drivers pit for hard tyres, Grosjean staying out on medium tyres, and while they clean up the track under the safety car, Hamilon leads Bottas, Verstappen, Leclerc, Grosjean, Sainz, Ricciardo, Norris, Stoll and Vettel in tenth place.

At the start of lap 19 the race restarts with Hamilton, Bottas and Verstappen pulling out in the front, Norris passes Ricciardo for seventh, and challenging his team mate Sainz. Albon is handed a 5-second penalty for causing the accident with Magnussen.

Sainz challenges Grojean and passes him for fifth place.

Stroll and Ocon continue to battle for ninth place.

Giovinazzi is handed a 5-second penalty for a safety car infringment.

On lap 37 Ricciardo passes Grosjean for seventh, and later in the lap Stroll does the same for eighth place - Grosjean pits for hard tyres and rejoins in 16th.

The Mercedes GP runners continue to put in fast laps but both Hamilton and Bottas have some graining on their front tyres.

On lap 46 Albon passes Russell for 13th place. Ocon continues to challenge Stroll and passes him for eighth.

Strolll is given a black and whilte flag.

Raikkonen loses part of his front wing but continues.

On lap 51 Bottas has a punctured left front tyre, and limps back to the pits, Verstappen passes him and pits for new soft tyres, and rejoins still in second place.

Bottas pits for soft tyres and rejoins in 12th behind Vettel.

Hamilton takes the win and crosses the finish line with a punctured tyre.