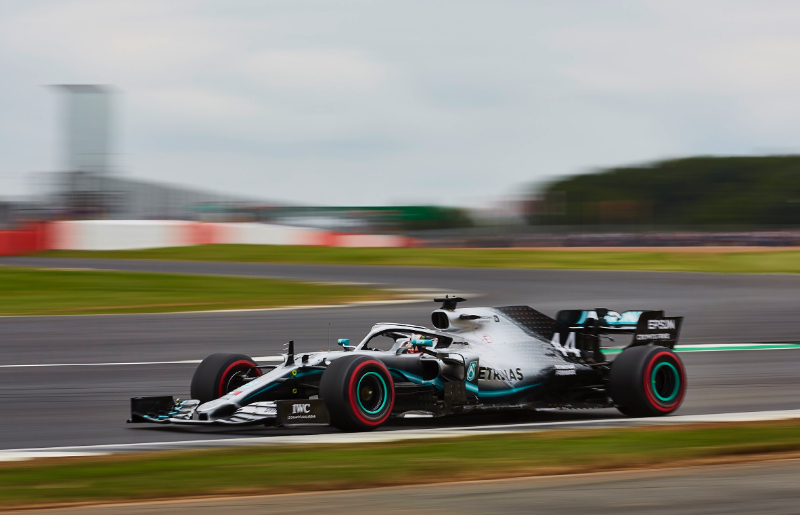 His team mate Valtteri Bottas was second, 24.928 seconds behind.

Charles Leclerc, after falling back to sixth after the safety car, came back to take third place in his Ferrari, 30.117s behind.

Pierre Gasly (34.692s) in the Red Bull-Honda posted his season best finish of fourth place, followed by his team mate Max Verstappen (39.458s), after a mid-race collision with Vettel, finised fifth, Carlos Sainz (53.639s) in the McLaren-Renault was sixth, Daniel Ricciardo (54.401s) in the Renault was seventh, Kimi Raikkonen (1m05.540s) in the Alfa Romeo-Ferrari was eighth, Daniil Kvyat (1m06.720s) in the Toro Rosso-Honda was ninth and Nico Hulkenberg (1m12.733s) in the Renault finished in the final points postion in tenth place.

Before the start Bottas was on pole ahead of his Mercedes team mate Hamilton on the front row.

At the appointed time the field came round and the lights went off and the race began with Bottas getting a good start and stayed ahead of Hamilton.

On lap 4 Hamilton makes an attempt to pass Bottas, gets ahead get goes into the corner too deep, and Bottas retakes the lead.

Hamilton continues to run just on the tail of Bottas in the lead.

On lap 11, Verstappen challenges Leclerc in third, but can’t pull it off. Bottas sets fast lap at 1m30.725s.

The next lap Gasly pits early and changes from medium to hard tyres and rejoins in tenth.

On lap 14 Leclerc and Verstappen both pit for medium tyres. The two come out of the pits side-by-side, Verstappen taking the position, but has no grip and runs wide, and Leclerc takes back the position.

On lap 16 Bottas pits from the lead for medium tyres and rejoins in third.

On lap 18 and 19 Verstappen keeps battling trying to pass Leclerc, but Leclerc keeps the position.

On lap 20 the safety car is deployed as Giovinazzi is stuck in the gravel trap. Hamilton pits hard tyres and keeps the lead. Verstappen pits as well for hard tyres. Vettel and Leclerc pit for hard tyres.

On lap 24 the race resumes with Hamilton leading. Perez and Hulkenberg make contact.

Perez pits for a front-wing change.

Leclerc asks Ferrari if something is broken on the left side, the team says no.

On lap 34 Leclerc closed on Gasly in fifth, Verstappen half a second behind Vettel in third.

On lap 36 Leclerc late-brakes and passes Gasly for fifth place.

On lap 37 Verstappen passes Vettel, Vettel tries to come back, but locks up into the next corner and hits the back of the Red Bull - the two spin off the track but continue. Vettel pits for a new front wing. Leclerc and Gasly go through into third and fourth.

Vettel is handed a 10-second penalty for causing a collision with Verstappen.

Bottas runs in second place, 20-seconds ahead of Leclerc, but still needs to make another pitstop.

On lap 44 Mercedes calls Hamilton to pit, but he doesn’t come in this lap.

On lap 46 Bottas pits for soft tyres and stays in second place.

At the end of 52 laps Hamilton wins ahead of Bottas and Leclerc.

Hamilton grabs a British flag in the car on his cool-down lap.