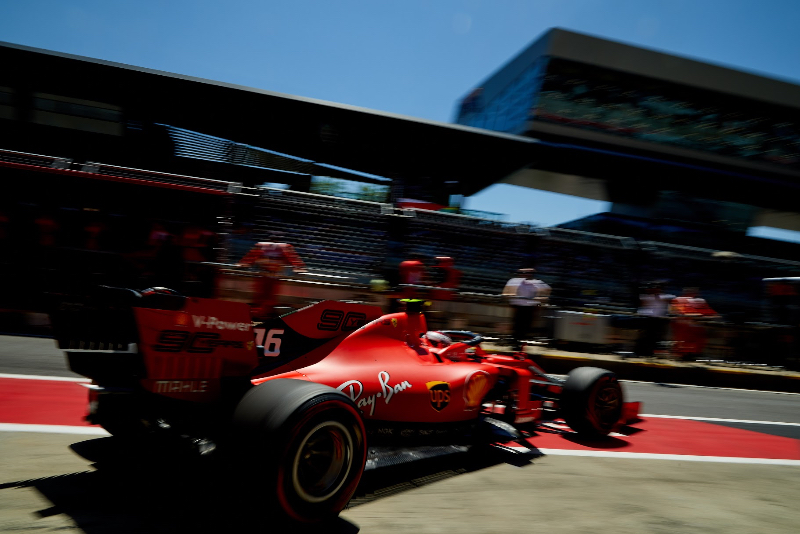 Light rain made the Silverstone circuit greasy for most of Saturday's Free Practice 3 for the British Grand Prix. But then the rain stopped, the track dried, and the lap times came tumbling down. And when the tumbling stopped, Ferrari drivers Charles Leclerc and Sebastian Vettel were at the top of the heap.

"The car seems quite well-balanced," he said after FP2, "but I think there's still room for improvement. It felt quick around the corners and there's plenty of corners in Silverstone, so that's a good thing. I still think it's going to be close again Saturday. It will be all about who finds the most performance tonight and tomorrow before qualifying, but it's nice to start the weekend on a positive note."

Local boy Norris was the first out in FP3.

Only six drivers did install laps in the early going. And only Russell did some flying laps and he clocked a 1:31.810.

Some drops of rain were falling fifteen minutes into the session as Leclerc did a lap on the intermediate Pirelli rain tires.

After sitting in the pits for 20 minutes, the Merc drivers, on inters, decided to go out. The Williams drivers joined them on track. A few other drivers also sampled the damp track using the inters.

But midway through FP3 only Russell, Bottas and Kubica had set lap times.

Hamilton and many others, however, then ventured out on the soft compound Pirelli slicks. The track was dry enough for the times to come tumbling down. Hamilton posted a 1:28.988. Leclerc beat that with a 1:27.446.

After that flurry of activity, most of the drivers were now in the pits with a dozen minutes remaining in FP3. The order was now: Hamilton, Bottas, Verstappen, Gasly, Leclerc, Vettel, Ricciardo, Norris, Sainz and Albon.

But not for long as Leclerc then posted a 1:25.905 to take the lead. Vettel grabbed second place with his 1:25.931. Hamilton improved but not enough to get out of third place.

The lap times further down the order were changing as well.