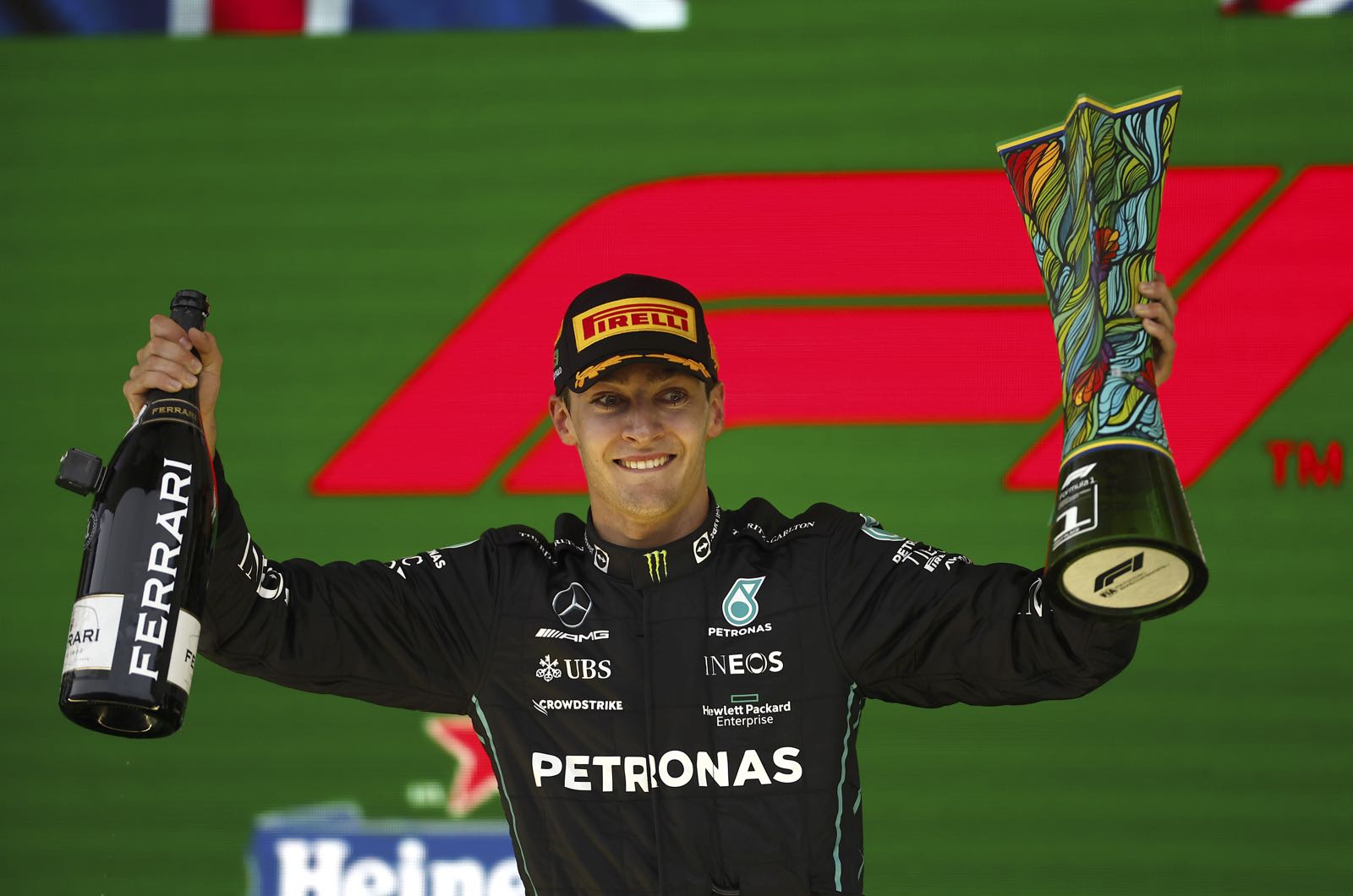 George Russell took his first career Formula One win, at today’s Brazilian Grand Prix in Interlagos in his Mercedes GP.

Lewis Hamilton, his Mercedes GP team mate, took a one-two finish for the team, 1.529 seconds behind the winner.

Carlos Sainz in the Ferrari took third place, 4.051 seconds behind the winner.

The win is Russell’s first win in his 80th race.

Charles Leclerc and Perez are now level in second place with 290 points. Mercedes closes to 19 points behind Ferrari in the Constructors’ Championship.

Charles Leclerc (8.44s) in the second Ferrari finished fourth, followed by Fernando Alonso (9.561s) in the Alpine-Renault was fifth, Max Verstappen (10.056s) in the Red Bull was sixth, his team mate Sergio Perez (14.080s) was seventh, Estabon Ocon (18.690s) in the second Alpine was eighth, Valtteri Bottas (22.552s) in the Alfa Romeo-Ferrari was ninth, and Lance Stroll (23.552s) in the Aston Martin-Mercedes took the final point in tenth place.

Before the start, with the weather looking good, Russell is on pole with his Mercedes GP team mate Hamilton alongside on row 1, the Red Bull’s of Verstappen and Perez on row 2, Leclerc and Norris on row 3, Sainz (pushed back 5-grid places) and Kevin Magnussen on row 4 and Sebastian Vettel and Pierre Gasly rounding out of the top 10 positions on the grid.

Yuki Tsunoda will start from the pitlane.

At the appointed time the field left the grid and took to the formation lap, the drivers lined up and the lights went out and the race began with Russell a good start with Hamilton, Verstappen, Perez, Lando Norris, Leclerc, Sainz and Vettel following.

Further on the lap Daniel Ricciardo tags Magnussen - Magnussen spins and hits Ricciardo. The safety car is out. Both drivers are out of the race.

On lap 5 Albon pits and changes from hard to medium tyres and rejoins last.

At the end of lap 6 the safety car pulls in and the race resumes with Russell in the lead, Verstappen tries to pass Hamilton, the two touch and they fall back. Leclerc and Norris touch, Leclerc spins and falls to the back.

Verstappen limps back and pits for a new front wing and rejoins 17th.

Hamilton then passes Gasly for sixth.

On lap 15 Hamilton passes Norris into the first corner for fourth place.

Alonso pits for another set of medium tyres.

On lap 18 Sainz pits from third and takes soft tyres and rejoins 11th. Sainz was complaining of brake problems and they removed a tear off in his brake duct.

On lap 21 Sainz passes both Stroll and Schumacher to take eighth place.

On lap 24 Perez pits from second and switches to medium tyres and rejoins sixth.

On lap 25 Russell pits from the lead for another set of soft tyres.

Norris, Bottas, Ocon and Schumacher all pit as well - Hamilton takes over the lead.

On lap 27 Vettel pits from fourth and switches to medium tyres and rejoins ninth.

Hamilton tells the team that the sky is getting quite dark.

On lap 30 Hamilton pits and changes to medium tyres and rejoins fourth behind Sainz.

On lap 36 Alonso pits for medium tyres, with a slow stop, and rejoins 16th.

Sainz pits from third for medium tyres and rejoins fourth.

Hamilton has closed within a second of Perez.

Hamilton is right on the tail of Perez.

On lap 45 Hamilton passes Perez into the first corner for second place, and trails Russell by 10.1 seconds.

Leclerc pits for medium tyres and rejoins in 14th.

On lap 46, Bottas and Vettel both pit. Norris pits as well.

On lap 49 Hamilton pits for soft tyres and rejoins in third behind Sainz and ahead of Perez.

Russell pits from the lead and gets a set of used soft tyres and rejoins still in the lead 1 second ahead of Sainz.

Norris pulls off on the side of the track - the virtual safety car is out.

On lap 54 Sainz pits for soft tyres and rejoins fourth.

On lap 55 with Norris still sitting on the side of the track, the Safety Car comes out.

Russell asks if they will be racing on the restart, the team responds “we are racing, but be respectful.”

Hamilton is worried about drivers with brand new tyres behind them.

On lap 58 the lapped cars are let past.

At the end of lap 59 the safety car is in and the race resumes with Russell in the lead with Hamilton right behind.

On lap 63 Sainz passes Perez in the DRS for third place.

Vertappen passes Ocon and Bottas into the first corner for seventh place.

On lap 64 Leclerc passes Perez for fourth. Alonso is all over the back of Perez.

Schumacher and Gasly battle for 13th.

On lap 68 Russell leads Hamilton by 1.2 seconds, Sainz 3.3 seconds behind the Mercedes.

Red Bull tells Verstappen that if he can’t pass Alonso that he should let Perez back through, to help his team mate with the points battle with Leclerc (which would give him two points over Leclerc).

Across the finish, Russell wins over Hamilton and Sainz.

At the finish Verstappen holds his position and doesn’t give the place to Perez. The team asks what happened, and Verstappen says, “I told you already last summer, you guys don’t ask that again to me, okay, are we clear about that. I gave my reasons - and I stand by it.”

After crossing the finish line Red Bull apologizes to Perez for Verstappen’s actions. Sergio responds, “yeah, it shows who he really is.”

On the podium, Russell says, "What an amazing feeling. it's been an emotional rollercoaster this season, even this race. Lewis was super fast and when I saw the Safety Car I thought Jesus, this is going to be hard. On the in-lap, the memories come flooding back, starting with my Mum and Dad in go-karting…”