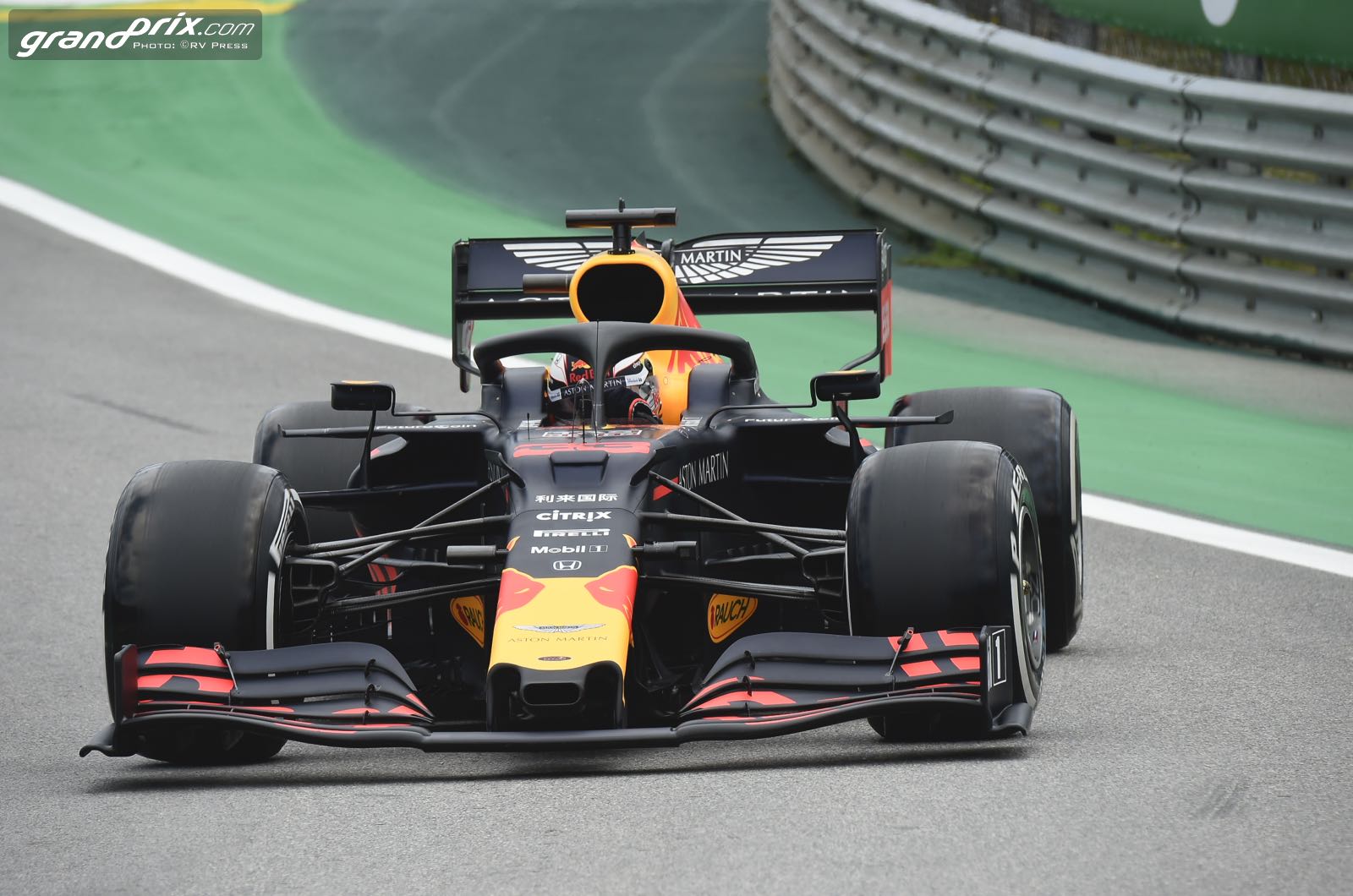 Max Verstappen won the Brazilian Grand Prix in his Red Bull-Honda, 6.077 seconds ahead of Pierre Gasly in the Toro Rosso-Honda in second place, and Lewis Hamilton in the Mercedes GP in third, 6.139s behind the winner.

The win is Verstappen’s third of the season and eighth career victory.

On the last lap Hamilton was chasing Alex Albon for second place, and dove down the inside of a corner trying to take the position, but Hamilton touched Albon, who spun, and didn’t finish. So after the race the stewards gave Hamilton a five-second penalty. So Carlos Sainz (8.896s) was promoted to third place, in his McLaren-Renault - and although he didn’t get to celebrate on the podium, it was his first career podium finish. It was the McLaren team’s first podium finish since 2013.

Kimi Raikkonen (9.452s) in the Alfa Romeo-Ferrari was fourth, his team mate Antonio Giovinazzi (10.201s) was fifth, Daniel Ricciardo (10.541s) in the Renault was sixth, Lewis Hamilton (6.139s + 5s penalty) was classified seventh, Lando Norris (11.204s) in the second McLaren was eighth, Sergio Perez (11.529s) in the Racing Point-Mercedes was ninth and Daniil Kvyat (11,931s) in the second Toro Rosso was tenth, in the final points paying position.

Before the start the skies were clear, and the weather warm. Verstappen starts on pole, with Vettel alongside on the front row, Hamilton and Bottas in the Mercedes’ start on the second row, Albon and Gasly make up row three, Grosjean and Raikkonen are on row four, and Magnussen and Norris round out the top ten. Leclerc, after his grid penalty starts in 14th. The top ten drivers starting on soft tyres, Ricciardo, Hulkenberg, Leclerc, Kvyat and the two Williams starting on medium tyres. Pirelli expecting a one stop-strategy, but with the warmer weather will the tyres hold up?

Verstappen says before the race "It's warmed today so will be harder on tyres for everyone. I think we have good pace."

At the appointed time the drivers came around to the grid, the lights are out and the race begins with Verstappen takes the lead from pole, Hamilton swoops into second ahead of Vettel in the first corner, followed by Vettel, Bottas, Albon, Gasly, Grosjean, Raikkonen, Magnussen.

Leclerc get up to tenth in the first two laps, Ricciardo and Norris battling.

On lap 6 Verstappen leads Hamilton by 2.2 seconds,ahead of Vettel and Bottas.

On lap 7 Leclerc passes Raikkonen for seventh place into the first corner.

On lap 8 Ricciardo tries to pass Magnussen, the two touch and Magnussen spins, Ricciardo has front wing damage and pits.

On lap 10 Leclerc passes Gasly for sixth into the first corner.

Verstappen reports, “I just picked up some vibration on the left front.”

Ferrari reports to Vettel, “we are on plan A plus two.”

Ricciardo is handed a five-second penalty for his collision with Magnussen.

Hamilton reports that his tyres are still good.

On lap 18 Perez pits and switches to medium tyres and rejoins in 17th.

Verstappen tells the team, “these tyres are going to go.”

On lap 20 Hamilton pits from second place for another set of soft tyres, and rejoins in sixth place behind Leclerc.

The next lap the leader Verstappen pits for soft tyres, Verstappen is slowed on the pit exit by Kubica rejoining the track and rejoins behind Hamilton in sixth place.

On lap 23 Hamilton passes Leclerc for fifth, Verstappen follows him past Leclerc.

At the end of the lap Verstappen dives down the inside of Hamilton and takes the position.

Albon pits and switches to medium tyres and rejoins in seventh place.

On lap 25 Vettel pits and switches to medium tyres and rejoins in fifth.

The next lap Bottas pits for hard tyres and rejoins in fifth place.

Leclerc running third has yet to pit.

Hamilton tells the team that he thinks they went to the wrong tyre, that they should have switched to medium tyres.

Kubica is given a 5 second time penalty for unsafe release.

Hamilton reports that he is feeling it become more windy.

On lap 41 Bottas pits for medium tyres and rejoins in sixth.

On lap 43 Hamilton pits and changes to medium tyres and rejoins in third place.

On lap 44 Verstappen pits from the lead and changes to medium tyres and rejoins in second place behind Vettel, and just ahead of Hamilton.

On lap 47 Gasly and Raikkonen both pit.

Verstappen closes on Vettel in the lead.

On lap 49 Vettel pits and changes to medium tyres and rejoins in fourth.

On lap 52 Bottas car apperars to be smoking, and pulls off the track to retire.

Hamilton as closed to 1.1 seconds behind Verstappen.

On lap 54 the safey car is deployed to collect Bottas’ car.

Verstappen pits and changes to soft tyres and rejoins in second. Leclerc pits for soft tyres as well.

Hamilton complains that the safety car is going too slow, and his tyred are getting cold.

At the end of lap 59 the safety car pits and the race resumes. Verstappen takes the lead into the first corner, Albon takes third from Vettel.

Verstappen the next lap has a 2.2 second lead.

On lap 63 Vettel tries to pass Albon into the first corner, but can’t pull it off.

On lap 66 Leclerc battles with Vettel, the two touch and Vettel has a rear tyre puncture, Leclerc has front damage. Both the Ferrari’s are out - the safety car is deployed.

The order behind the safety car is Verstappen, Albon, Gasly, Hamilton, Sainz, Raikkonen, Giovinazzi, Ricciardo, Norris and Perez in tenth.

At the end of lap 69 the race resumes and Hamilton dives down the inside of the first corner to take third place.

After the finish Hamilton said, "I massively apologise to Albon, I went for a move and the gap just closed. Completely my fault. I took a lot of risks today.”

On his second place finish Gasly said, "I don't know what to say, it's so emotional. I'm so happy for Toro Rosso, these guys. They've given me a great car since I came back.”