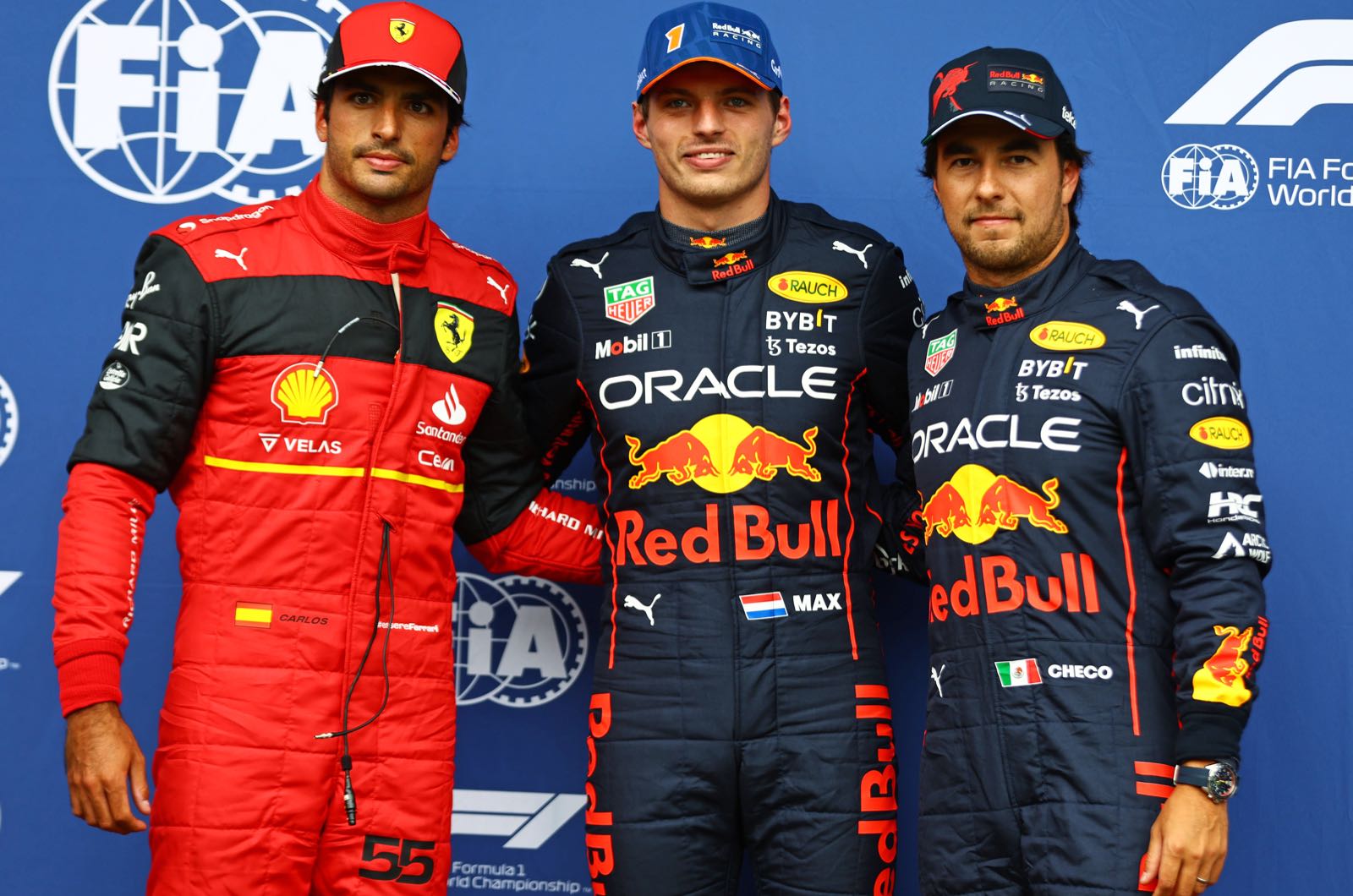 Q: Max, massive congratulations. That was an incredible lap, over six tenths to Sainz and in front of your home crowd. How did it feel?

Max VERSTAPPEN: Yeah, it was an amazing qualifying but I think already the whole weekend we've been on it. The car has been working really well and just basically trying to fine tune it and it all came together in qualifying. Of course, I had to be a bit careful with the amount of tyres I was using. Also looking for tomorrow, you know, starting in the back, but yeah, very happy with my lap and it's great to be here. It's an amazing track, amazing fans around and yeah, I hope you had a good day.

Q: Well, you mentioned it there, there are a lot of penalties on the grid tomorrow. You'll be starting 15th, with Charles hot on your heels, but with such a comfortable lead in the championship, how do you approach tomorrow's race?

Verstappen: We need to move forward. I think especially with a car like this, it would be a shame not to be on the podium.

Q: We wish you the best of luck, Carlos, congratulations, you've been promoted to first grid spot tomorrow. How was that for you?

Carlos SAINZ: It was OK. I mean, happy to be starting on pole, obviously not so happy to see the gap to Max this weekend and the gap that Red Bull has on us. We need to see why Red Bull is so fast around this track and why we are trailing them but to start from pole is a good place to start and we will try and win from there tomorrow.

Q: Well, there seemed to be a real team effort there on the last lap but it just didn't make the difference. How do you plan to stay ahead of Checo in tomorrow's race?

Sainz: Yeah, my Q3, run one was cleaner. The out lap was a bit of a mess, playing with the tow, seeing who wanted to lead and in the end I had to lead and I had no tow and I had to take the lead there. But in the end it was a bit of a mess and the first lap was good enough for P2, which I knew was going to give me the pole. But yeah, still a big puzzle, you know, to see this big gap to Max and to see the big gap to Red Bull, which makes me wonder what's going to happen tomorrow in the race because I think our race pace is a bit better than our quali pace but there's definitely something to find.

Q: Well, first grid spot is certainly something to smile about. Congratulations and good luck tomorrow. Checo, well done today. Tomorrow, you’ll be starting on the front row of the grid. What are your expectations tomorrow?

Sergio PEREZ: Yeah, certainly. I mean, P2 is not the worst place to be around here. I think if I'm able to get a good run to Carlos then it can be different I can be on the other side of the road, so looking forward for tomorrow, I think there will be a great race ahead of us.

Q: There are a lot of penalties on the grid, but you certainly are in the best position here to gain an opportunity. You're just five points behind Charles. So how do you maximise that tomorrow?

Perez: Yeah, it will be very important, you know, to get a good start and try to do our own race from the beginning and I think that will be the key for tomorrow.

Q: Max, many congratulations. No one could touch you for pace today. Tell us about your point-six-of-a-second margin over the field. How good was the car?

Verstappen: Straights… corners! It's been good! It felt really good in the car.

Q: Is this the best the car has been in qualifying trim this season?

Verstappen: I mean, it depends also bit on the track layout. You know, sometimes it's a bit easier to nail a lap than other tracks where, if you have a tiny lock-up big, big lap-time losses and stuff. But yeah, I would say it's definitely one of the best ones.

Q: Let's throw it forward to tomorrow, you're going to be starting further back due to grid penalties of course. What are the goals for this grand prix?

Verstappen: Well, I think with the pace we have in the car, I want to move forward and I want to be at least on the podium.

Q: Carlos, we'll come to you now. You'll be starting on pole position tomorrow, your best start here at Spa. How good was your car today?

Sainz: In terms of overall feeling it was okay. We don't have any big balance issues. Of course, the whole weekend, we just have a pace deficit to Red Bull and Max. It's a bit puzzling because we we've been on the pace all year. You know, we've been fighting for pole all year, but for some reason at this track, this weekend, I don't know if it's temperatures, the efficiency of their car or whatever it is putting them with a healthy - very healthy - margin ahead that is making our life a bit more difficult. But even like that, we executed a good Quali as a team and we managed to put ourselves on pole for tomorrow and we will try and win from there.

Q: You've said already, a little bit earlier, that there was more to come on that second lap of Q3. Had that been a clean lap, how close to Max do you think you could have got?

Sainz: Not much quicker. Already Q3 run one was a pretty clean lap. Obviously, with a tow from Charles, I missed a bit my braking into Turn 5-6-7 and lost a bit there. But there was no more than a tenth in it. So, when you see the gap to Max, it makes you wonder where that… how much was it, I don’t even know, seven-tenths or eight-tenths? It has been there all weekend because FP3, FP2, he was just always more than half a second ahead of us in every compound, in every situation. So, some homework to do there. And if not, I do believe that in race trim, we can be a bit more competitive.

Q: Well, given the mixed-up grid tomorrow, do you see this race as a straight battle between yourself and Checo?

Sainz: Not entirely, no - especially with the pace Max has. I think, as soon as there's either a Safety Car that can help him close the gap, or even with the pace that he has, that if you translate it into 44 laps, it’s… he can come back, and we've seen him do it before. I mean, that will not be my focus, obviously, the first and second stint it will be a straight battle with with Checo and the Mercedes, if they have the race pace, and we will try and pull away for sure but I wouldn't discard the two guys at the back making it through.

Q: Just to clarify, Carlos, do you think Max can challenge for the win tomorrow?

Sainz: Yeah, I think so, yeah. If I would have done his lap that he did today I would be also confident that I… and that as soon as something happens at the front, or there’s a safety car to close the gap that he can make it.

Q: Checo, let's talk about your session. How good was the car how good was your fastest lap?

Perez: Yeah, it was going well. Q3 wasn't as straightforward. On my first lap, I ended up being the lead car, basically, and without any circulation around here you can lose a bit. Still, the lap wasn't very, very clean so there was more to come and then on my second lap we ran out of time. There was a lot of traffic ahead. Yeah, I just ended up too close to the cars ahead and I had no grip so I ended up going straight into turn five.

Q: What about the long run pace of your car? Do you think it's going to be as effective in the race tomorrow as it has been over one lap?

Perez: Yeah, we definitely have at least a good idea on where to put the car for tomorrow. It was very useful, the long run with it today, we learnt a lot. And hopefully tomorrow we are able to translate that into race pace.

Q: Now what about this opening lap tomorrow? If you look through the history books, very often second place has been a better place to start this Grand Prix than pole position. How do you view the opening lap?

Perez: Yeah, I think certainly you don't want to be leading into Eau Rouge if there's a car behind, really close by. But yeah, hopefully we can make the most out of it, get a good start and get the lead from Carlos early on.

Q: (Rodrigo Franca - Car Magazine Brazil) Max, starting 15th, but together with Leclerc, do you think there's a different race? The media is saying it’s like a reverse grid race for tomorrow? How do you approach that race?

Verstappen: Yeah, survive, of course, lap one, that's the most important, but then after that I need to pass a few cars, before, of course, you get into a competitive position. But it's a bit like Hungary as well. Of course, it's a bit further back now but the basics are the same.

Q: Max, how does the gravel on the exit of Turn 1 affect things on the opening lap tomorrow?

Verstappen: Yeah, you don't want to hit that. It's not a rally car we are in so you have to stay off that.

Q: But do you think we'll see people being a little more conservative going into Turn 1?

Verstappen: I think so. You could see already in the F3 race that normally in the old spec of the track, people would just run wide and then come back because it lets you. Of course now you can't so now everyone will be a bit more cautious.

Q: (Bastien Dauby) Checo, you have the opportunity tomorrow to get second in the championship in front of Charles, so how do you manage to do your race tomorrow? Will you attack very much or will you be more conservative?

Perez: No, definitely I think there is a good opportunity for tomorrow, starting P2, especially around here, around this place it's always a great opportunity. And so I will go for it. I really hope very early on, I'm able to do my own race, that will be key for my hopes tomorrow.