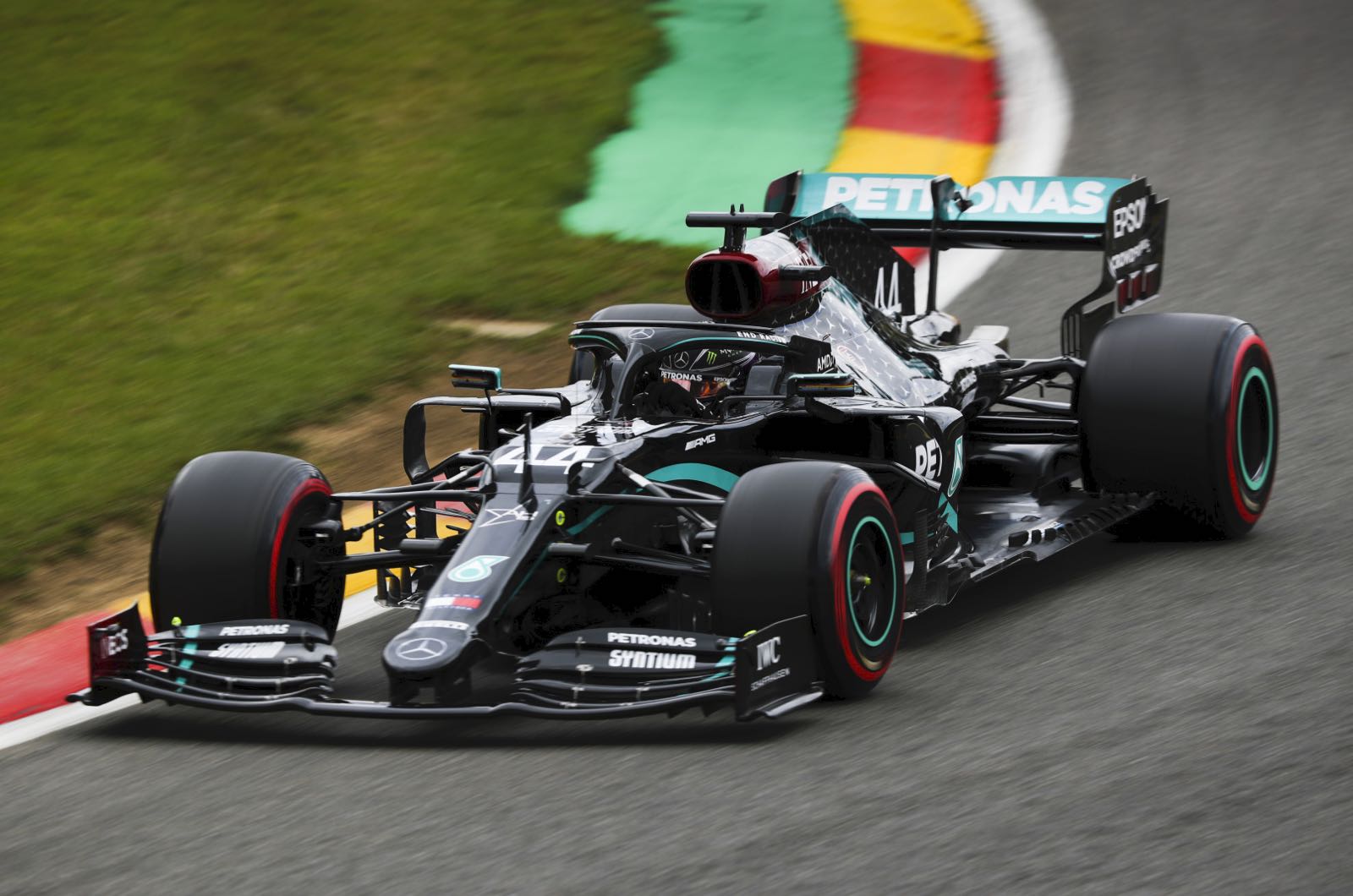 Lewis Hamilton won the Belgian Grand Prix at Spa Francorchamps, leading from start to finish in his Mercedes GP, 8.448 seconds ahead of his team mate Valtteri Bottas in second place. Max Verstappen in the Red Bull-Honda finished third, 15.455 seconds behind the winner.

The win extends Hamilton’s lead in the championship, and is his fifth win in seven races this season, and his fourth Belgian GP win.

Daniel Ricciardo (18.877s) finished fourth in the Renault, followed by his team mate Esteban Ocon (40.650s) in fifth, Alex Albon (42.712s) in the second Red Bull was sixth, Lando Norris (43.774s) in the McLaren-Renault was seventh, Pierre Gasly (47.371s) in the AlphaTauri-Honda was eighth, Lance Stroll (52.603s) in the Racing Point-Mercedes was ninth and his team mate Serio Perez (53.179s) finished in the final points position in tenth place.

Before the start, Hamilton is on pole with Bottas alongside on row 1, Verstappen nd Ricciardo on row 2, Albon and Ocon on row 3, Sainz and Perez on row 4, and Stroll and Norris rounding out the top 10.

Carlos Sainz will not start, as he had an exhaust failure on the way to the grid.

The quickest stategy the teams are considering is for a one-stop race, starting on soft tyres and switching to hard tyres after 26 laps.

The first three starters on medium tyres, the rest of the top ten starting on soft tyres.

There is a 40% chance of rain during the race.

At the appointed time the cars came around, the lights went off, and the race began with Hamilton in the lead over Bottas, Verstappen and Ricciardo. Leclerc up to eighth on the first lap.

On lap 4 Gasly passes Leclerc - Perez gets by as well.

Gasly on hard tyres is closing on Stroll in seventh.

On lap 11 Giovinazzi spins and hits the barriers, and collects Russell as well, blocking the track - the safety car is out.

All the other cars pit the next lap for hard tyres, except for Gasly and Perez who haven’t stopped.

Ferrari tells Leclerc they are considering plan B or plan C, presumably a two stop strategy.

At the start of lap 15 the race restarts with Hamilton still in the lead.

On lap 18 Albon passes Perez on the outside of the Bus Stop chicane.

Mercedes tells Bottas that it will be a long stint on this set of tyres.

Leclerc challenges Vettel for 12th but can’t make the pass.

On lap 19 Perez pits and switches to hard tyres and rejoins in 17th.

On lap 21 Ricciardo passes Gasly up the hill to get back in fourth place.

Alon passes Gasly, who is still running since the start on hard tyres for fifth place.

Leclerc pits again for medium tyres and runs in 17th.

Gasly pits and switches to medium tyres and rejoins 16th.

Vettel complains his tyres are going off - he is lapping in the 1m51s, three seconds ogf the pace of the leaders.

Gasly passes Raikkonen up the hill for 11th place.

Ocon is closing on Albon in fifth.

Gasly comes by his team mate for tenth place.

Hamiltomn locks up and goes wide at the chicane but continues in the lead, 5 seconds ahead with 5 laps remaining.

Bottas locks up into the bus stop chicane as well, teams worrying whether the tyres will last until the finish.

Ocon is challenging Albon for fifth.

Hamilton crosses the line and wins over Bottas and Verstappen.

Ricciardo sets the fastest lap on the last lap at 1m47.483s.