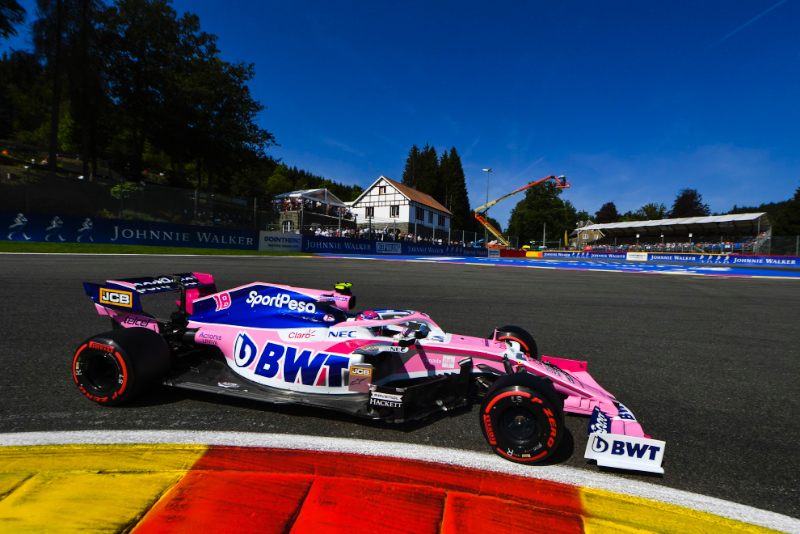 Christian Horner, Sporting Director: "The tragic death of Formula 2 driver Anthoine Hubert at Spa today is a reminder of just how cruel motorsport, the sport we love, can be sometimes. In his rookie season, Anthoine was demonstrating to be a star of the future having already won races in Monaco and France this year. On behalf of Aston Martin Red Bull Racing, our thoughts are with Anthoine's family, Renault and the BWT Arden team, which is close to my heart. Our thoughts are also with Juan Manuel and his family at this time."

Cyril Abiteboul, Managing Director: "Our thoughts are with Anthoine's friends and family at this tragic time. Anthoine was a bright young man. His performance and conduct on and off track was that of a true gentleman and it was a pleasure and honour to have had him within our Academy. He will be sorely missed by our teams at Enstone and Viry. His spirit will remain with the team and we will race in his memory."

Kevin Magnussen (10th, 1:45.086): "I would say we can be happy today. After yesterday we didn't expect to have any pace today, but on the other hand, you do have it in mind that things can turn on their heads overnight because these tires, for us at least – as we all have the same tires, it's very difficult. We don't seem to be able to work the tire in the right way for whatever reason, I don't think it's a lack of tire knowledge really, because I'm not sure anyone completely understands these tires, I think it's just something somewhere in our car that doesn't suit them. It can make all the work you do in the background a little bit irrelevant, as you can turn around with different results every day, every session. It's a little bit frustrating, but today going P10, starting P8 tomorrow, we'll take that."

Romain Grosjean (11th, 1:44.797): "We got the best of the car today, both drivers, so that's great. Since the beginning of the weekend we haven't really been comfortable with the car. I think this weekend has showed some of the weakness we have, but that's good as we have a very clear vision of where we need to go for the future – that's the positive part. On the more negative side, I think our race pace isn't there, so I'm a bit worried for tomorrow. We have an issue with tire usage, not because of the tires – we know they have limitations, but when you don't have the downforce to go with it, it just makes things worse. Hopefully the changing weather will be to our advantage."

Guenther Steiner, Team Principal: "I would have signed on for today's qualifying positions if you'd offered me them yesterday as we were struggling. The team did a good job to get the car back. I don't think there was a lot more in the car other than what we took out of it today. So, we will start eighth and ninth, which is fantastic compared to where we were yesterday. Tomorrow the weather will change and maybe we'll get a little bit of attrition, and maybe we can take some points home."

Lando Norris (12th, 1:44.847): "I'm happy with qualifying, happy with my performance and what we could do as a team. We were struggling a bit to find a good direction for the car throughout yesterday and today. I think we made a good step forward coming into qualifying from FP3. It was a bit hard to know how it was going to go, but we seemed at our most competitive in quali because so far we've been a bit behind everyone else. I think we made some steps forward but not enough to get into Q3. So, I'm happy with my lap and how everything went, but the grid position we'll be starting from won't be as good as we wanted."

Carlos Sainz (17th, 1:46.507): "Disappointing day. Another flag on a Saturday that doesn't give us the chance to show our pace. There was definitely some lap-time left in the bag there at the end of Q1. We did the first run with the used rubber, and when we put on our new set of tyres and the engine mode for the second and final run, we had to abort due to the red flag. Together with the engine penalty it's a frustrating day, but there's nothing I can do about it. I prefer to look forward and fully focus on the race tomorrow. We'll fight until the chequered flag as always."

Andreas Seidl, Team Principal: "We've been struggling to get more performance out of our package and couldn't make any steps forward throughout the practice sessions. Therefore, qualifying outside Q3 was not unexpected. We were unlucky with the red flag for Carlos which denied him a second shot at Q2. We now switch our focus to race preparation, and we're expecting a difficult race tomorrow. Still, we're here to fight and with several grid penalties applied to various cars tomorrow, we could be back in a position to challenge for points."

Otmar Szafnauer, Chief Operating Officer: "It's almost impossible to find the right words at moments like these, but we are all devastated to hear the tragic news from today's Formula 2 race. Anthoine was a wonderful person and a tremendous racing talent who had already enjoyed great success in the sport. We extend our sincere condolences to his family, friends, and supporters."

Franz Tost, Team Principal: "Sadly today, motorsport has experienced a tragic loss with the passing of Formula 2 Driver Anthoine Hubert. This is a terribly sad moment for the entire motorsport community. On behalf of Scuderia Toro Rosso, I would like offer our deepest condolences to his family and friends at such a difficult time. Our thoughts are also with Juan Manuel Correa in the hope that he makes a full recovery."

Jody Egginton, Technical Director: "The team is shocked by the news that Anthoine Hubert has passed away following his accident in the Formula 2 race. It has shaken the motorsport family and all our thoughts are with Anthoine's family and friends at such a tragic time. As for our Qualifying, the setup changes we made overnight had improved the car and as such, we were able to set more competitive lap times in FP3. Although Dany was not able to close his best lap due to encountering some traffic, Pierre did, and we went into Qualifying with the expectation of having a reasonable performance. Unfortunately, this has not been the case. Following poor first runs from both cars due to an issue with Dany's car, and Pierre struggling with tyre temperatures, there was no opportunity to improve with the second runs due to the red flag. We now have a lot of work ahead of us tonight to try and recover as best as we can from the situation we find ourselves after Qualifying, making sure we are in a position to maximize any opportunities which may come our way."

Toyoharu Tanabe, Honda F1 Technical Director: "We are deeply saddened to learn of the death of Anthoine Hubert on the opening lap of the F2 race this afternoon. On behalf of the Honda Motor Company, I offer our sincere condolences to his family and friends. Our thoughts are also with Juan Manuel Correa, injured in the same incident. The two Toro Rosso cars got no further than Q1, unable to do their quickest lap because of the red flag after Giovinazzi had a problem. Kvyat was using the new Spec 4 PU as from yesterday, which means they have to start from the back of the grid, so today, they focussed mainly on race preparation rather than qualifying. This will be our first race running Spec 4 on what is a very demanding track for the PU, so our first target is to finish the race with all four cars. This is a track where overtaking is possible, so we hope they can move up the order."

George Russell (19th, 1:47.548): "We knew before the weekend it was going to be a very different story to Hungary. It was a bizarre qualifying, I was only able to get one lap in due to the red flags in the session. It is how it is, and we will make the most out of it. We will be starting higher up the grid due to penalties, but it will still be a tough race."

Robert Kubica (20th, No Time): "I felt a lack of power on the back straight, but there was no strange noise. At first, I thought it was a deployment issue, but then I realised in the mirror that there was smoke. Unfortunately, that's how it is in motorsport, it can happen. It's a big shame because some other cars are taking grid penalties, so we could maybe have started further up. Now it's important to evaluate what happened and move forward."

Dave Robson, Senior Race Engineer: "FP3 was a quiet session and we completed our planned programme with only a very minor interruption due to the red flag. Both drivers were happier with their cars this morning and only very minor changes were made ahead of qualifying. The qualifying session was very difficult with two red flags interrupting Q1. Of course, the first was for Robert's power unit issue, which will mean that we fit a different power unit to his car for tomorrow. The second red flag meant that George, like everyone else apart from Verstappen, was unable to complete his second timed lap. We always knew that Spa would be a challenge for us and so it has proved. Although we will find ourselves further up the starting grid tomorrow due to a variety of penalties, it will nonetheless be a difficult race for both drivers."