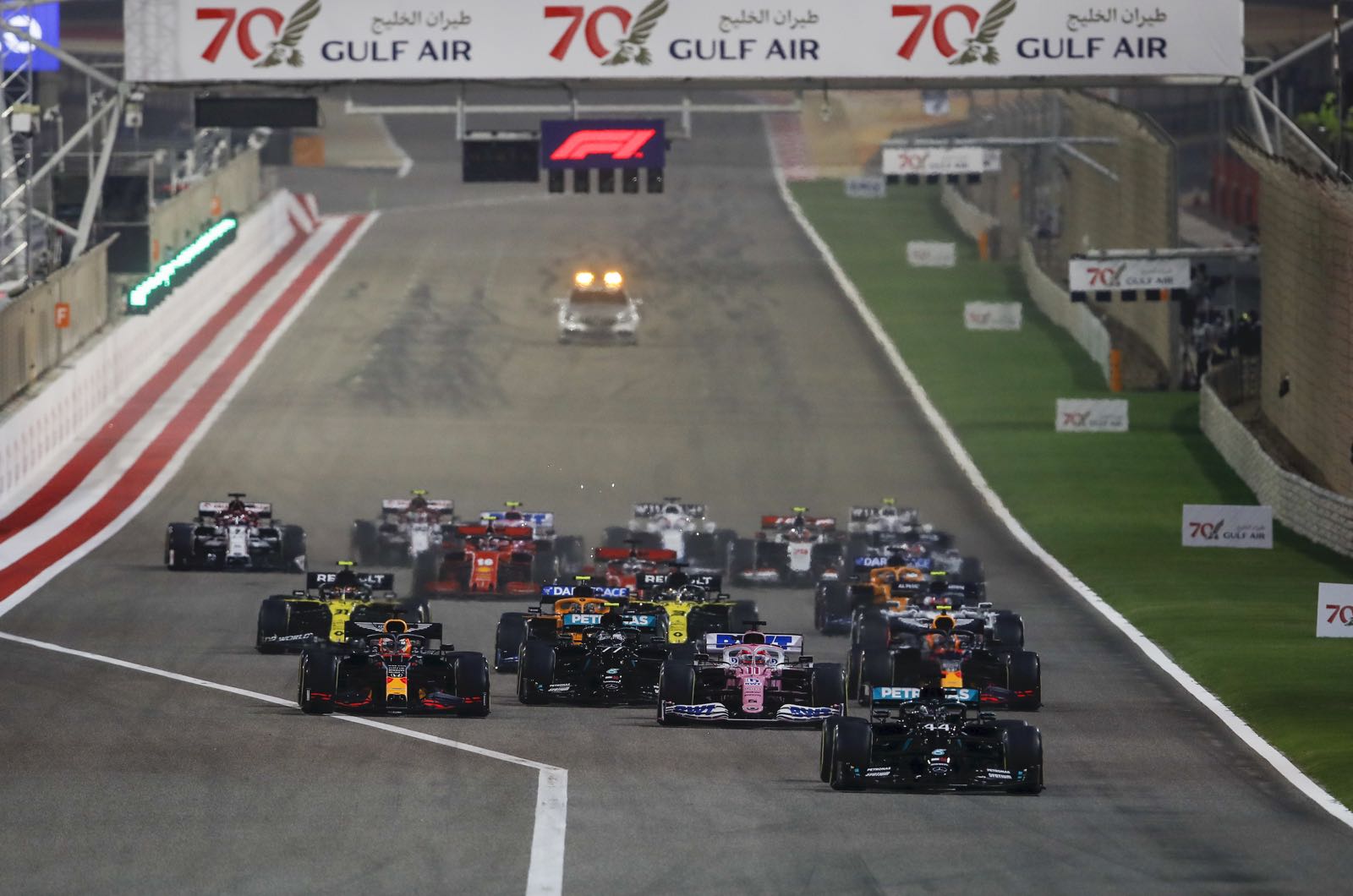 Lewis Hamilton won the Bahrain Grand Prix – a race in which Romain Grosjean had a miraculous escape from a horrifying accident. Here is how Hamilton won.

Hamilton put his Mercedes on the pole for the 10th time this year. It was also his 98th career F1 pole.

Teammate Valtteri Bottas joined him on the front row – the 11th front row lockout for the team this season.

Hamilton took the lead at the start of the 57 lap race.

Heading down the straight between the third and fourth turns, Grosjean cut to his right. And into the path of Daniil Kvyat's AlphaTauri.

That pitched the Haas into the steel barriers on the right side of the track.

The Haas speared through the barriers, broke in half, and caught fire.

After about 20 seconds Grosjean emerged from the flaming wreck. Marshals were already on the scene and fighting the fire, as were the FIA's medical director and the medical car driver.

Of course the race was immediately red flagged.

It took just over 90 minutes to clean up the mess, replace the barriers, and remove the wrecked car.

The drivers did a lap behind the safety car and lined up for the standing start restart.

Hamilton again shot into the lead.

Kvyat tangled with Lance Stroll, and his Racing Point was flipped and he landed upside down.

The safety car came out and stayed out until the end of lap eight.

Hamilton stayed ahead of Verstappen, Perez, Albon, Lando Norris (McLaren) and Ocon on the restart.

Bottas had to pit with a deflating tire. That put him out of contention for a podium finish.

This would be a two pit stop race for most drivers.

Verstappen pitted three times. The last was for a fresh set of Pirelli's medium compound tires. They gave him the speed to turn the fastest lap of the race, and get the extra championship point.

"Physically it was such a demanding race," Hamilton said after winning. "Max pushed me all the way and he had a lot of speed today. I was struggling a little bit with the car sliding around, but I just had enough to be able to respond to Max's quick laps when it mattered.

"I was a little cautious how it would play out at the end of the race once Max pitted, but I'm so thankful to my team because they made the right calls all day on the strategy. What a privilege it is to be able to get another result like this."

"I tried everything I could to stay with Lewis and there wasn't much left to give," Verstappen said after finishing second, "but unfortunately we were just a bit too slow. I think we could maybe have put Mercedes under a bit more pressure but overall I think second is where we belong today with the pace of the car."

After running third for much of the race, Perez had an engine blow up on lap 54 of 57.

"It's really hard for both myself and the team to take today's result, but in the grand scheme of things, it almost becomes irrelevant after Romain's crash at the start," he said. "At the end of the day, it's either one more or one less podium or trophy for me, but the important thing is that Romain is still with us and that he's ok."

Albon, who was fourth, inherited third.

"Of course there's a bit of luck involved today," Albon said, "and Sergio drove a good race but we were there to capitalize on anything happening ahead and that's exactly what we did so I'm really happy."

Grosjean was flown to a hospital. His only injuries were some burns on his hands.

"Hello everyone, just wanted to say I'm okay, well, sort of okay, thank you very much for all the messages," Grosjean said on Instagram from the hospital just a few hours after the race. "I wasn't for the Halo some years ago but I think it's the greatest thing we brought to Formula 1 and without it I wouldn't be able to speak to you today, thanks to all the medical staff at the circuit, at the hospital, and hopefully I can soon write you quite some messages and tell you how it's going."