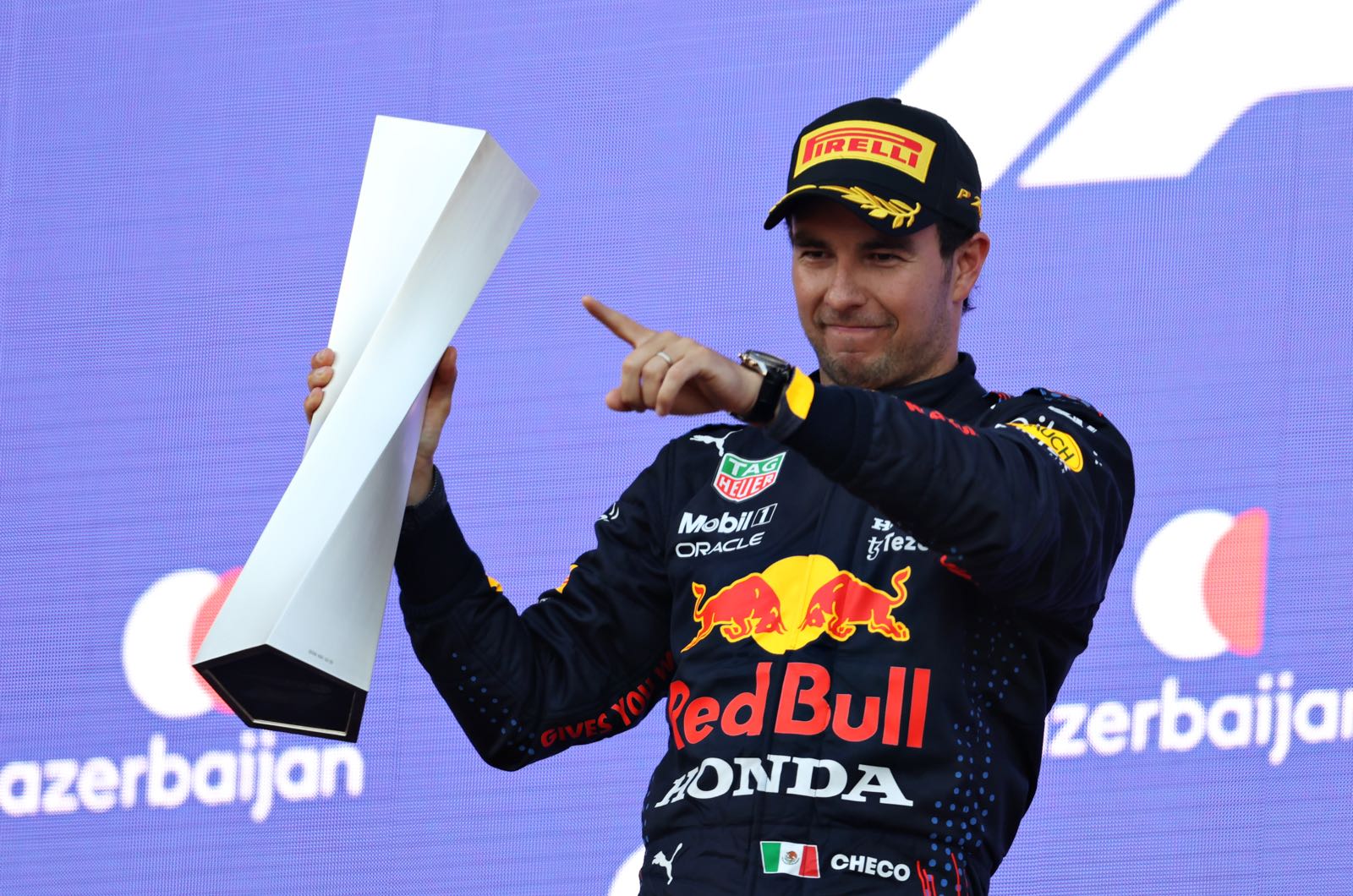 Sergio Perez won the Azerbaijan Grand Prix in his Red Bull-Honda, after a late race tyre failure crashed Max Verstappen out of the lead.

After a red flag at lap 49 the race finished with a two-lap shootout to the finish.

Sebastian Vettel finished second in his Aston Martin-Mercedes, 1.385 seconds behind. It is the first podium for Aston Martin in modern times.

Pierre Gasly in the AlphaTauri-Honda was third, 2.762s behind the winner.

With neither of the top title contenders scoring points, Verstappen still leads Hamilon by four points, while Perez moves up to third, ahead of Norris in fourth and Leclerc in fifth in the World Championship. In the Constructors Championship Red Bull-Honda continues to lead Mercedes, Ferrari, McLaren and AlphaTauri.

The win is Perez’s first for Red Bull, and second of his career.

Vettel has never finished in the Azerbaijan GP out of the top four positions.

Charles Leclerc (3.828s) in the Ferrari was fourth, after starting on pole, followed by Lando Norris (4.754s) in the McLaren-Mercedes was fifth, Fernando Alonso (6.382s) in the Alpine-Renault was sixth, Yuki Tsunoda (6.624s) in the second AlphaTauri was seventh, Carlos Sainz (7,703s) in the second Ferrari was eighth, Daniel Ricciardo (8.874s) in the second McLaren was ninth and Kimi Raikkonen (9.576s) in the Alfa Romeo-Ferrari picked up the final point in tenth place.

Before the start Verstappen is allowed to replace the soft tyres he ran with in qualifying yesterday with a similar set of soft tyres.

Leclerc took his second pole in a row and leads the field with Hamilton alongside on row one, Verstappen and Gasly are on row two, Sainz and Perez on row three, Tsunoda and Alonso on row four and Norris and Bottas rounding out the top ten starters.

The fastest potential tyre strategy for Pirelli is a one-stopper starting of soft tyres, switching at around lap 15 to hard tyres for the run to the finish at lap 51. The top 13 starters are on soft tyres.

At the appointed time the field came around the circuit, the lights go out and the race began with Leclerc with a fast start, Hamilton and Verstappen following. Perez gets ahead of Sainz and Gasly to fourth. Alonso up to seventh. Vettel and Schumacher touch in the first corner

On lap 2, Hamilton passes Leclerc for the lead on the straight.

Estebon Ocon pits with an engine problem and retires.

Perez is closing on Leclerc.

Alonso and Norris both pit for hard tyres.

Sainz pits for hard tyres. Norris passes Alonso for 13th. Hamilton is complaining that his tyres are going off.

Sainz goes off a corner run-off but rejoins.

On lap 12 Verstappen pits for hard tyres and rejoins in third ahead of Hamilton.

On lap 14 Perez pits from the lead for hard tyres, and has a slighly slow stop and rejoins in third ahead of Hamilton.

Vettel yet to pit, leads in his Aston Martin.

On lap 19 Vettel pits from the lead for hard tyres and rejoins in seventh.

Sainz is pressuring Giovinazzi and passes him for 13th place.

Nikita Mazepin goes down an escape road, but contines.

Lance Stroll, who started on hard tyres, in fourth is yet to pit.

On lap 31 Stroll has a tyre failure and crashes and the safety car is out.

On la 35 Alonso, Giovinazzi, Russell and Schumacher all pit under the safety car, Alonso for soft tyres.

At the end of lap 35 the safety car comes in and the race restarts. Vettel passes Leclerc for fifth.

Verstappen gets a 2.3 second lead over Perez and Hamilton.

On lap 38 Hamilton sets fast lap at 1m45.215s, and is challenging Perez in second place.

Hamilton tells the team, “I am not getting closer.”

On lap 46 Verstappen’s left rear tyre fails, and he crashes out of the lead. The safety car is deployed.

Under the safety car Latifi does not follow the field through the pitlane, and is under investigation.

On lap 48 the red flag comes out and the race is stopped. The cars come to a stop in the pitlane, all cars are allowed to change tyres.

The track is cleaned up, as the drivers are expecting to restart for a two lap shootout.

Hamilton’s front wing is damaged and the team can replace it under red flag rules.

The race will resumed at 6:10p local time.

Vettel has a new set of soft tyres for the restart.

The FIA announces that they will restart with a standing start.

Latifi will be penalized a 10-second stop-go penalty after the race resumes.

The cars roll out of the pits and follow the safety car around to the grid, the lights go out, and the race restarts.

Perez gets in the lead, Hamilon alongside, but Hamilton locks up and runs down the run-off at the first corner.

Norris is up to fifth.

Gasly and Leclerc are battling for third. Norris is on their tails.

Perez wins ahead of Vettel and Gasly,

After the race Perez said, "I'm sorry for Max, he had a tremendous race and deserved the win. But in the end it was a fantastic race for us. It was close, but we just managed to finish the race. [Hamilton] pushed me, I had so much pressure from him. But at the restart, I was like, I'm not going to lose it."