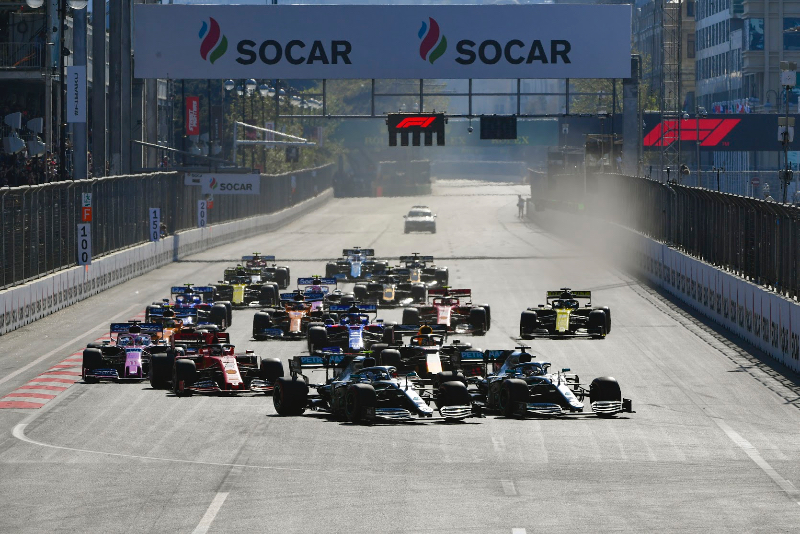 Bottas retakes the lead in the drivers championship by one point over Hamilton. Bottas and Hamilton have both taken two wins for the season, Mercedes winning all four races of the season so far.

Max Verstappen (17.493s) in the Red Bull-Honda was fourth, Charles Leclerc (1m09.107s) in the Ferrari was fifth, Sergio Perez (1m16.416s) in the Racing Point-Mercedes was sixth, Carlos Sainz (1m23.826s) in the McLaren-Renault was seventh, Lando Norris (1m40.268s) in the second McLaren was eighth, Lance Stroll (1m43.816s) in the second Racing Point was ninth and Kimi Raikkonen (1 lap) in the Alfa Romeo-Ferrari took the final point position in tenth place.

Charles Leclerc took the point for fastest lap on the 50th lap of the race.

Before the start Bottas starts on pole for his eighth time, with Mercedes team mate Hamilton alongside, Vettel in the Ferrari and Verstappen in the Red Bull on row two, Perez and Daniil Kvyat on row three, and Norris and Leclerc (after his qualifying crash) on row four, Sainz and Daniel Ricciardo rounding out the top ten in qualifying.

Bottas and Hamilton got off side-by-side Bottas taking the lead over Hamilton, Vettel, Perez, Verstappen, Norris, Kvyat, Sainz, Ricciardo, and Leclerc falling back to tenth.

On lap 2 Bottas pulls a 2.4 seconds lead over Hamilton, and 6.3 seconds ahead of Vettel in third.

On lap 4 Leclerc has passed Ricciardo and then Kvyat and runs in eighth.

Verstappen closing up on Perez in fourth.

Verstappen complains that “the engine braking

On lap 11 Vettel pits from third for medium tyres and rejoins in fifth.

Bottas tells the team, “I’m happy to stop when needed…”

On lap 12 Bottas pits from the lead for medium tyres and rejoins in fourth.

The next lap Hamilton pits for medium tyres and rejoins in fourth. Leclerc takes over the lead.

Robert Kubica is handed a drive-through-penalty.

On lap 15 Verstappen pits from second place for medium tyres and rejoins in sixth place.

Mercedes tells Bottas that he has a long way to go, and to save his tyres.

Ricciardo passes Raikkonen and then Stroll and now run-in 13th.

On lap 22, Bottas closes to 5.2 seconds behind Leclerc and is lapping one-second quicker per lap.

Kubica pits. Grosjean locks up and goes off track, but continues. He is still yet to pit.

On lap 27 Bottas has closed to 2.5 seconds behind leader Leclerc.

On lap 29 Bottas closes to 1.2 seconds behind Leclerc.

On lap 31 Bottas passes Leclerc for the lead.

Leclerc lets Vettel through for third place, Ferrari fearful that when they switch Leclerc off the medium tyres for soft tyres that they will not last long.

On lap 35 Leclerc pits and switches to soft tyres, and rejoins just behind Gasly in sixth.

Leclerc gets past Gasly for fifth place.

Norris is closing on Perez in seventh place.

On lap 39 Gasly slows and retires in a runoff area. The virtual safety car is out.

Grosjean retyres in the pits.

On lap 41 the virtual safety car ends, and the race continues.

Hamilton closes to under a second behind Bottas.

Bottas crosses the line with the win over Hamilton and Vettel.