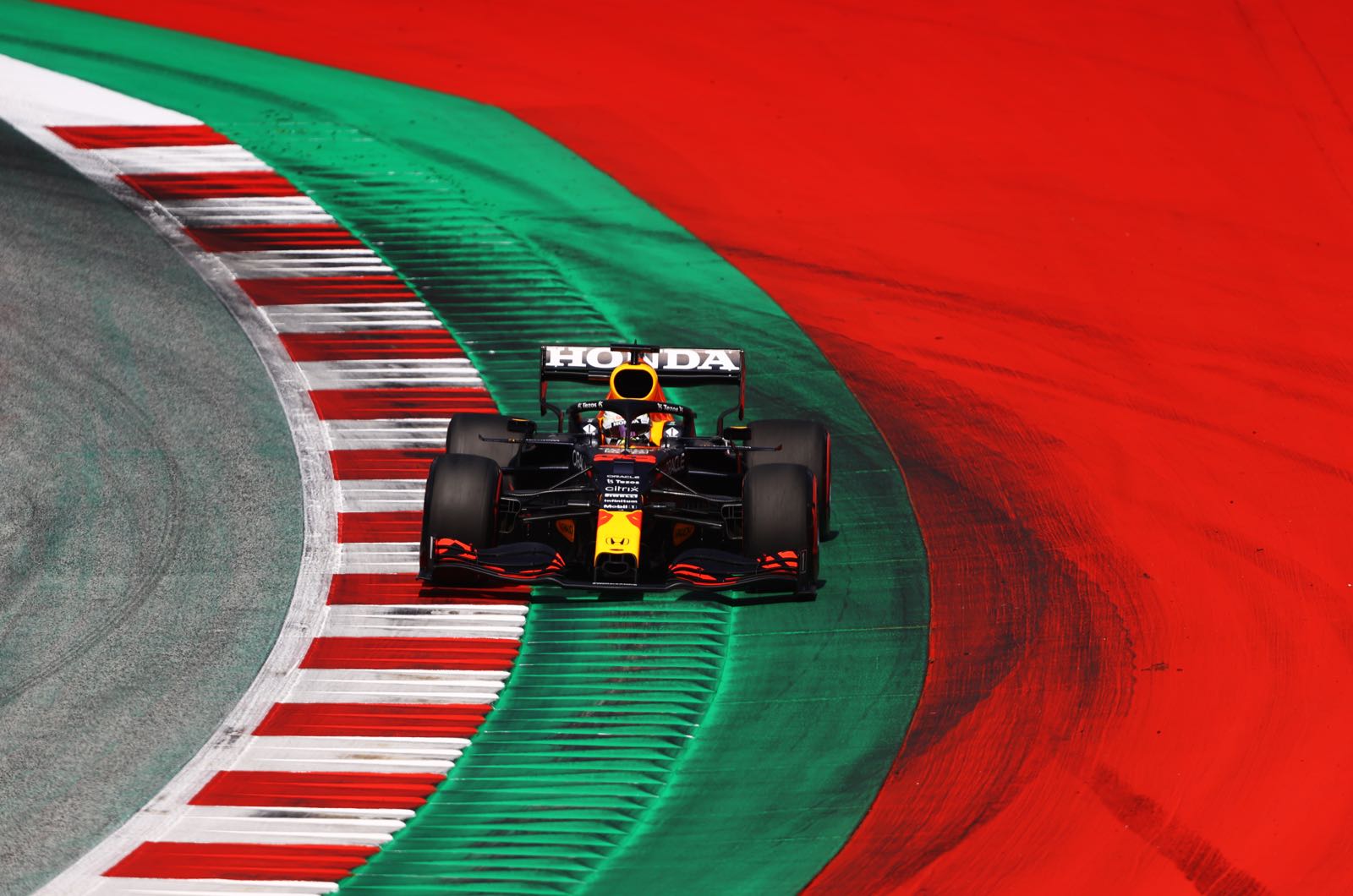 Max Verstappen took a flag-to-flag victory at the Austrian Grand Prix in his Red Bull-Honda, 17.973 seconds ahead of Valtteri Bottas in his Mercedes GP, followed by Lando Norris (20.019s) in third place in his McLaren-Mercedes.

The win is Verstappen’s fifth win of the 2021 season.

Before the start it is a reversal of last week’s sunny skies, it was cloudy with spots of rain, and the weather about 15 degrees cooler. Verstappen on pole with Norris alongside on the front row, Perez and Hamilton on row two, Bottas and Gasly on row three, Tsunoda and Russell on row four and Stroll and Sainz rounding out the top ten. Vettel starting 11th after getting a three-place grid penalty for impeding Alonso during qualifying.

There is the possibility of both one-stop and two-stop strategies. The first five starting on medium tyres, the rest starting on a mix of tyres.

At the appointed time the field came around, the lights went out and the race started with Verstappen taking the lead over Norris, Perez, Hamilton and Bottas.

On the first lap Ocon makes contact with Giovinazzi - Ocon is out, Giovinazzi pits, and the safety car is out.

At the end of lap 3 the safety car comes in and the race resumes.

Out of the first corner Norris and Perez battling. On turn 3 the continue to battle and Perez goes wide and goes into the gravel trap and falls back. Norris is second with Hamilton and Bottas following. Perez in tenth place.

Giovanazzi is given a 5-second time penalty for overtaking during the first safety car period.

Norris asks the team about Hamilton, “I think he's quicker.”

Vettel pits for hard tyres and rejoins in 19th.

Hamilton reports that his rear tyres are starting to go off.

Norris is given a five-second penalty for his incident with Perez.

Tsunoda is given a 5-second time penalty for crossing the line at pit entry.

On lap 30 Ricciardo pits from fifth for hard tyres and rejoins in 12th.

On lap 31 Norris and Bottas both pits for hard tyres. Russell pits as well.

On lap 39 Raikkonene pits from sixth for medium tyres and rejoins 15th.

On lap 41 Perez and Leclerc battle and touch, Perez getting eighth place.

Sainz in fifth place is yet to pit.

Bottas is closing on Hamilton in second.

Perez is handed a five-second penalty for forcing Leclerc off the track.

Perez and Leclerc are battling once again, Leclerc goes off but continues.

Hamilton complains to the team that he thinks he has

On lap 49 Sainz pits from fifth for medium tyres and rejoins in ninth.

Vettel pits for a second time.

Verstappen comes back and sets another fast lap.

On lap 53 Norris passes Hamilton for third place. Hamilton pits for another set of hard tyres and rejoins still in fourth.

Ricciardo and Leclerc are battling for sixth.

On lap 61 Verstappen pits from the lead for another set of hard tyres and rejoins still in the lead.

Russell and Alonso are battling for the final point..

Sainz is catching Ricciardo in sixth.

At the finish Verstappen wins over Bottas and Norris.