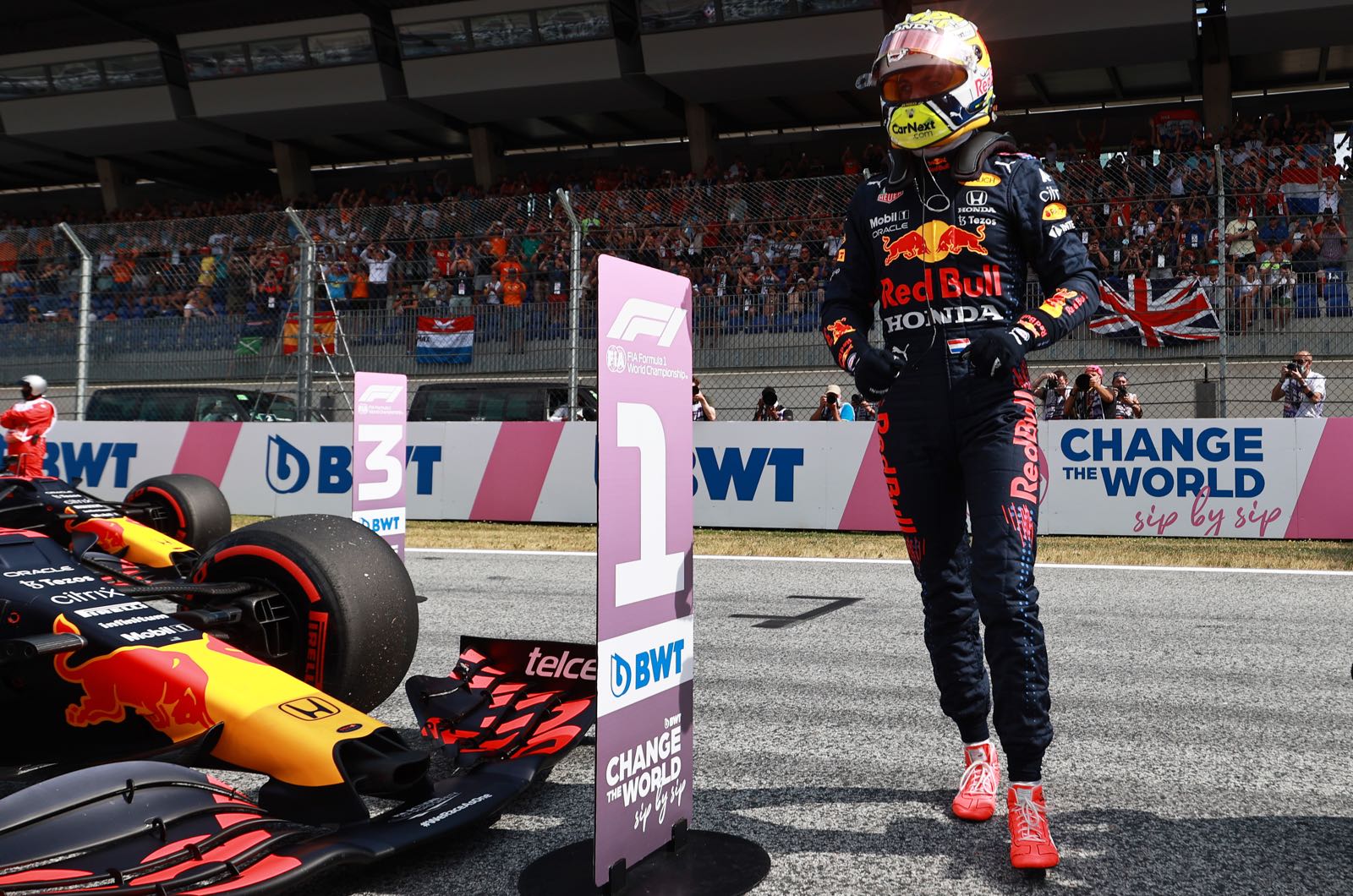 Tens of thousands of Dutch fans, clad in orange, celebrated when Red Bull driver Max Verstappen earned the pole for the Austrian Grand Prix. And the McLaren team celebrated when Lando Norris put his orange McLaren second on the grid for the first time in his F1 career.

Fastest in FP3 was Verstappen with a time of 1:04.591…ahead of Bottas and Hamilton. Earlier in the day Mercedes had announced that Hamilton had signed a two-year contract extension.

Five of the last seven F1 races at the Red Bull Ring had been won by the polesitter.

The Haas drivers were the first out in Q1.

Out came Verstappen, and the Dutch fans cheered lustily. He clocked a 1:04.249. Hamilton slotted into second at 1:04.506, putting him ahead of Bottas, Sainz, Norris and Perez.

When there were five minutes remaining in Q1, Stroll was 15th and on the cutoff line. Tsunoda was 14th and Latifi was 16th. Norris, meanwhile, had jumped up to second and Alonso to third.

The top five stayed in the pits, but the other 14 drivers went back out in the final two minutes.

The five drivers who were eliminated at the end of Q1 were: Raikkonen, Ocon, Latifi, Schumacher and Mazepin.

The top 10 qualifiers would start the race using the same compound tires they used to clock their fastest lap time in Q2. So some of the quicker drivers could take a safe chance of running the medium or even the hard compound Pirelli slicks in this session.

Perez, on the mediums, was the first out in the 15-minute session. He had the track to himself and set a 1:04.554. He pitted and the track was empty for a few seconds. Then all the drivers headed out. Verstappen, the Ferrari drivers and the Mercedes drivers were on the medium compound tires.

Norris grabbed second ahead of Perez, Vettel, Hamilton and Stroll.

Tenth and on the bubble with two minutes to go was Tsunoda, and Russell was ninth while Sainz was 11th. Gasly jumped to second while Verstappen improved to 1:03.927.

But then Hamilton and Bottas pushed Gasly to fourth.

Russell got into Q1 for the first time as a Williams driver.

The five drivers who were eliminated at the end of Q2 were: Sainz, Leclerc, Ricciardo, Alonso and Giovinazzi.

The fastest 10 drivers who moved on to Q3 were: Verstappen, Hamilton, Bottas, Gasly, Norris, Perez, Vettel, Tsunoda, Stroll and Russell.

Q3 lasted 12 minutes, but nobody rushed out until the nine minute mark. Only Russell stayed in the pits.

All the drivers went to the garages. Just over two minutes remained when they started to leave the garages.

Norris got a 1:03.768. Verstappen did not improve but held onto the pole. It was the first time Norris was on the front row for an F1 race.