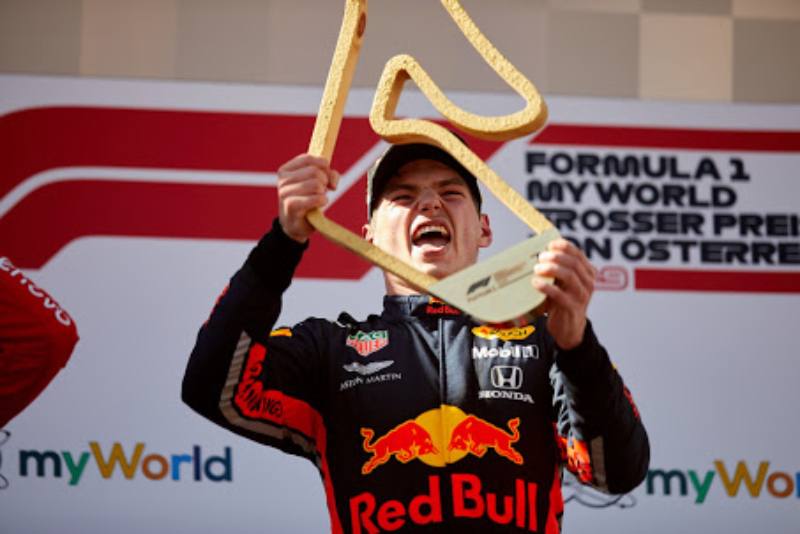 Red Bull Honda Max Verstappen grabbed the lead from Ferrari's Charles Leclerc in a wheel-bashing duel during the final laps of the Austrian Grand Prix and went on to win. It took over three hours for that victory to be confirmed, however, as the stewards carefully examined all the evidence and declared it was a "racing incident."

Leclerc started from the number one spot for the second time in his F1 career. His first F1 pole was in Bahrain.

Verstappen lined up second. That made the youngest front row of the grid in F1 history at an average age of 22 years and 265 days.

Hamilton qualified second. But he had a grid penalty for impeding one of Kimi Raikkonen's fast laps so was dropped down to fourth. His Mercedes teammate Valtteri Bottas lined up third.

After missing the final qualifying session because of a mechanical problem on his Ferrari, Sebastian Vettel was eighth on the grid.

When the red lights went out to start the 71-lap race, Verstappen's anti stall kicked in. His car stuttered away and was engulfed by others and he dropped to seventh place.

UP, UP AND AWAY

Leclerc took the lead and swept up the hill towards Turn 3. By the end of lap 1 he already had a 1.2 second lead over Bottas. Next came Hamilton, Norris, Vettel and Verstappen.

This was going to be yet another one pit stop race. That left the team's little elbow room for varied strategy.

However, the Ferraris had started the race on the soft compound Pirelli slicks while the Mercedes cars and Verstappen's Red Bull were on the medium tires.

BACK TO THE FRONT

Leclerc was back in front on lap 32 and stayed there until lap 68.

"After that start, I thought the race was over!" Verstappen said. "But after the pitstop we were flying."

As the race wound down, Leclerc came under attack from Verstappen. They battled wheel-to-wheel.

As they went into the right-hander Turn 3, Verstappen was on the inside. They banged wheels and Leclerc got moved off the track. Verstappen was in the lead!

Tens of thousands of Dutch fans, all sporting orange colors, cheered every move Verstappen made. They got even more excited when he took the lead, and then went completely crazy when he won the Austrian Grand Prix for the second consecutive year.

Verstappen and Leclerc were summoned to see the stewards after the race and explain their side of what happened.

"It's hard racing, otherwise we have to stay at home," Verstappen. "If those things are not allowed in racing, then what's the point of being in Formula 1?"

NO CHANCE TO FIGHT

"On the incident for me it was pretty clear in the car," Leclerc said. "I don't know what it looked like from the outside but we'll see what the decision is. We touched and I had to go wide, and I didn't have a chance to fight back."

"While exiting the corner, there was contact between the two cars," the stewards said in a statement. "In the totality of the circumstances, we did not consider that either driver was wholly or predominantly to blame for the incident. We consider that this is a racing incident."

Bottas was relieved to finish third.

"We expected this race to be tricky, but it turned out to be even more difficult than we predicted," he said. "We had to do lots of lifting and coasting and couldn't use all engines modes to keep the engine from overheating. So, we couldn't really race properly, and I had to manage temperatures for the majority of the race. It made both defending and attacking very difficult."

Vettel went from ninth to fourth.

"I'm disappointed about how things went for me yesterday but today's race was fun for me from the cockpit," he said. "I enjoyed some good wheel to wheel battles, pushing throughout."

For the first time this season Hamilton did not finish first or second. Instead he was down in fifth.

"It wasn't the easiest day," he said. "We knew already before the race started that we might be in trouble here. Overheating proved to be a fairly big issue for us today. I think we had good pace, the car felt good, but we just couldn't race due to the overheating. It seemed to be a limitation of our car this weekend and the other cars didn't seem to struggle quite as much as we did, so we'll have to look into this and try to fix it."

Verstappen got the bonus point for the fastest lap in the race.

Most of the Orange Army had left the circuit by the time Verstappen's win was confirmed. So they got the bonus of being able to celebrate again when they heard the news.

Whether Verstappen or Leclerc was declared the winner, it brought an end to the eight-race win streak by Mercedes.

This was the first F1 victory for a Honda-powered car since Jenson Button's win in the 2006 Hungarian Grand Prix.